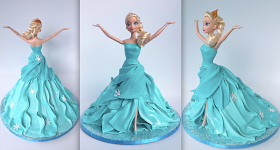 I made this Elsa doll cake for my niece who absolutely loves Frozen.  I was looking to replicate the scene where she sings "Let it Go" so I knew that the traditional doll cake wasn't going to work, which is why I decided to try this peeking-leg-style cake.  I found that it was a pretty forgiving design, since the fondant is layered.

A couple of days prior to making the cake, I made the top part of Elsa's dress so that it would have time to harden before I had to handle it.  I started by taping her legs in the position that I wanted them (one foot in front of the other) so that she wouldn't move while the top part of the dress was drying.  To make the top part of her dress, I rolled out some dark teal fondant and cut one side with a pizza cutter so that it had a straight edge.  One thing that isn't really noticeable in the final pictures of this cake is that there are actually two different shades of teal in this dress - dark teal for the top/middle, and light teal for the middle/bottom. 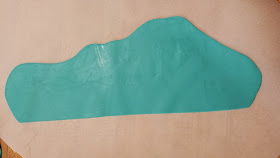 Then I brushed the top half of her body with a little bit of water and wrapped the fondant around her with the straight edge up and the uneven edge down.  I used a sharp knife to cut away the excess in the back where it overlapped, and then I cut the uneven edge off of the bottom.  I used my thumb to smooth out the seam as best as I could.  Then I cut a small, rounded "V" in the front of her dress on her chest.  The good news is that she has arms so she was able hold herself up while the top of her dress dried. :-) 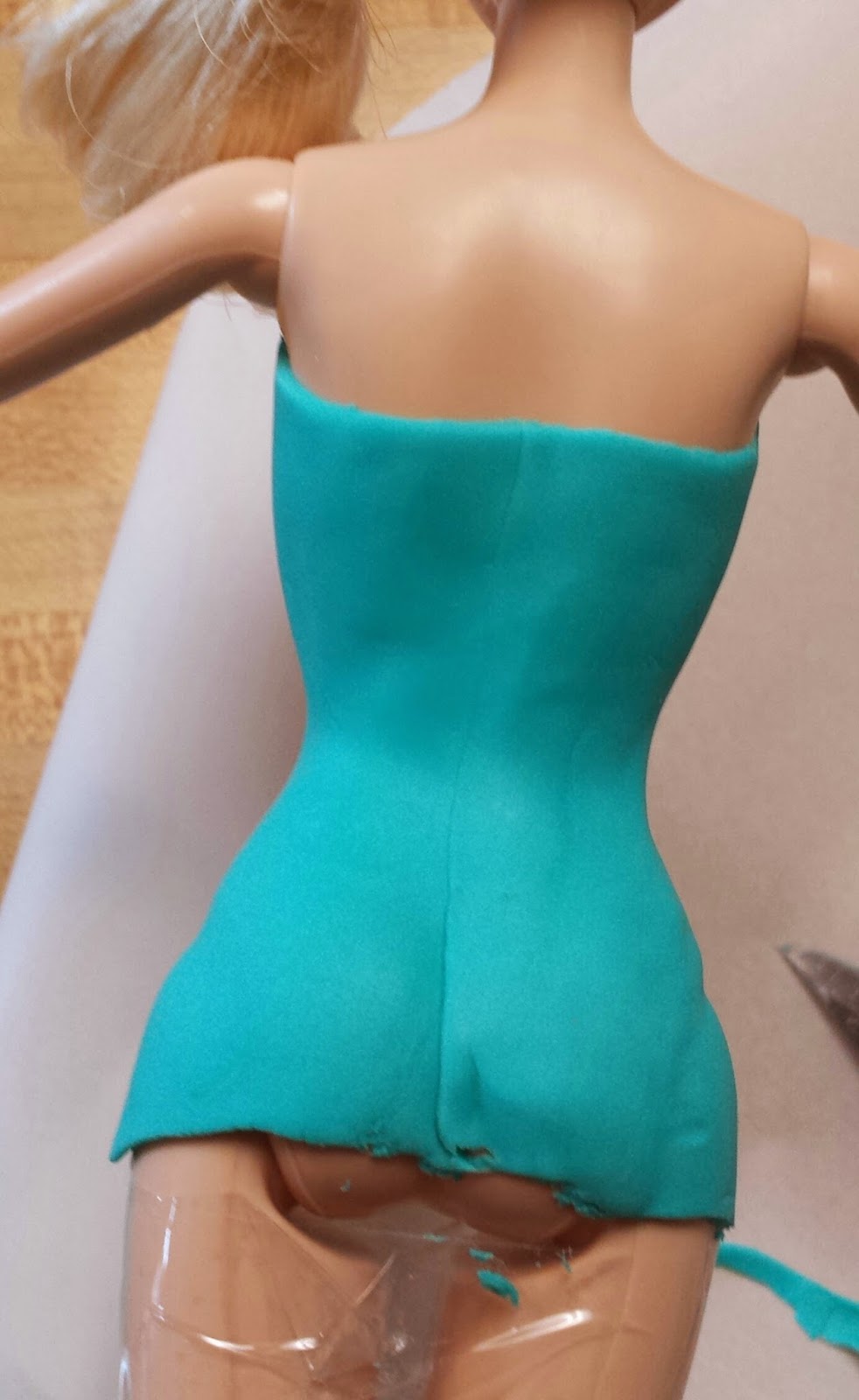 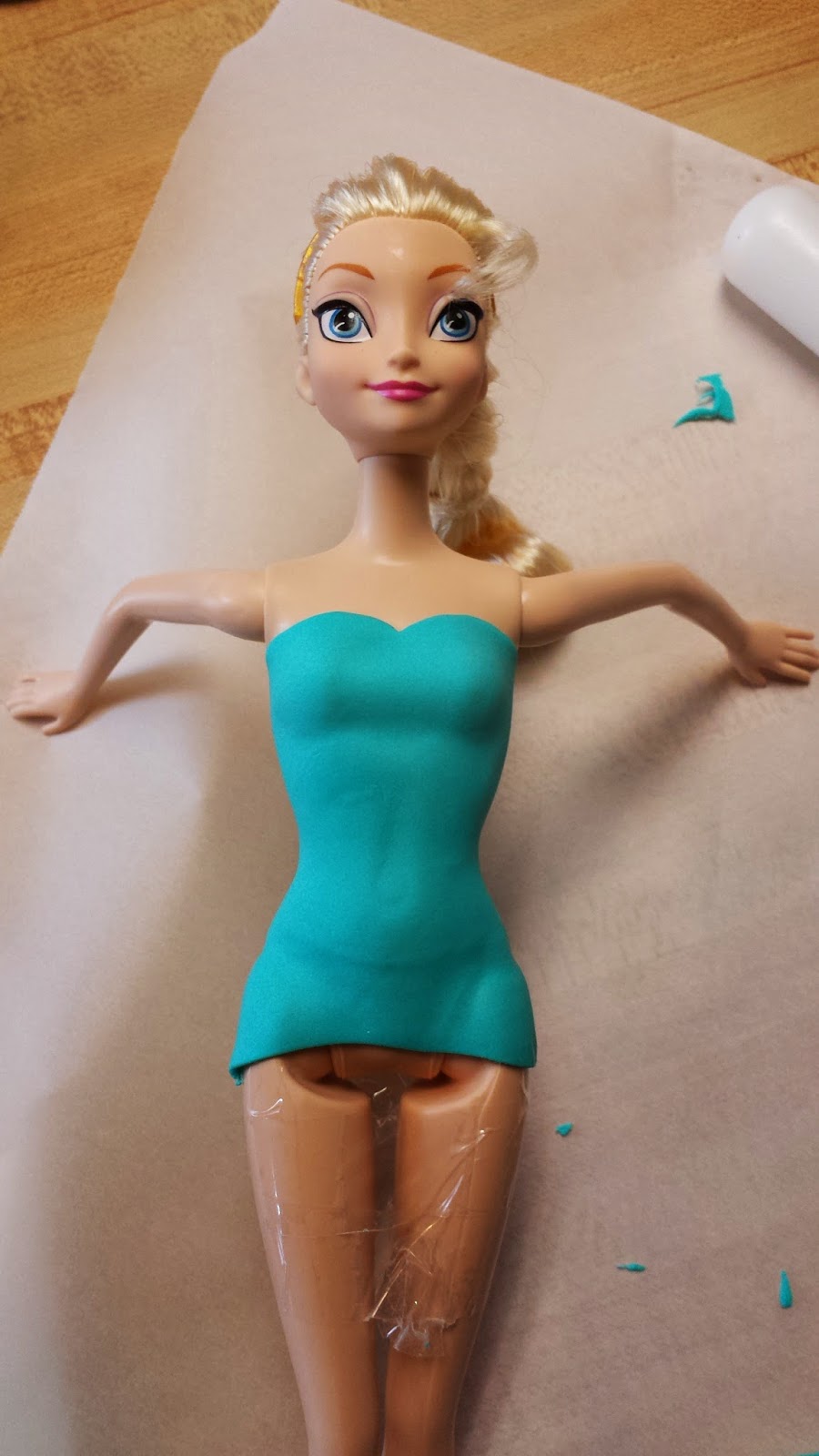 I used my clay extruder to make a thin strip of light teal fondant to go around the top edge of the dress and attached it with a little bit of water. 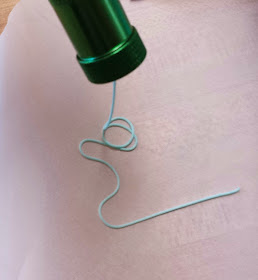 Lastly, I brushed on a little bit of luster dust (my favorite!) and I left her to dry on the counter for a couple of days. 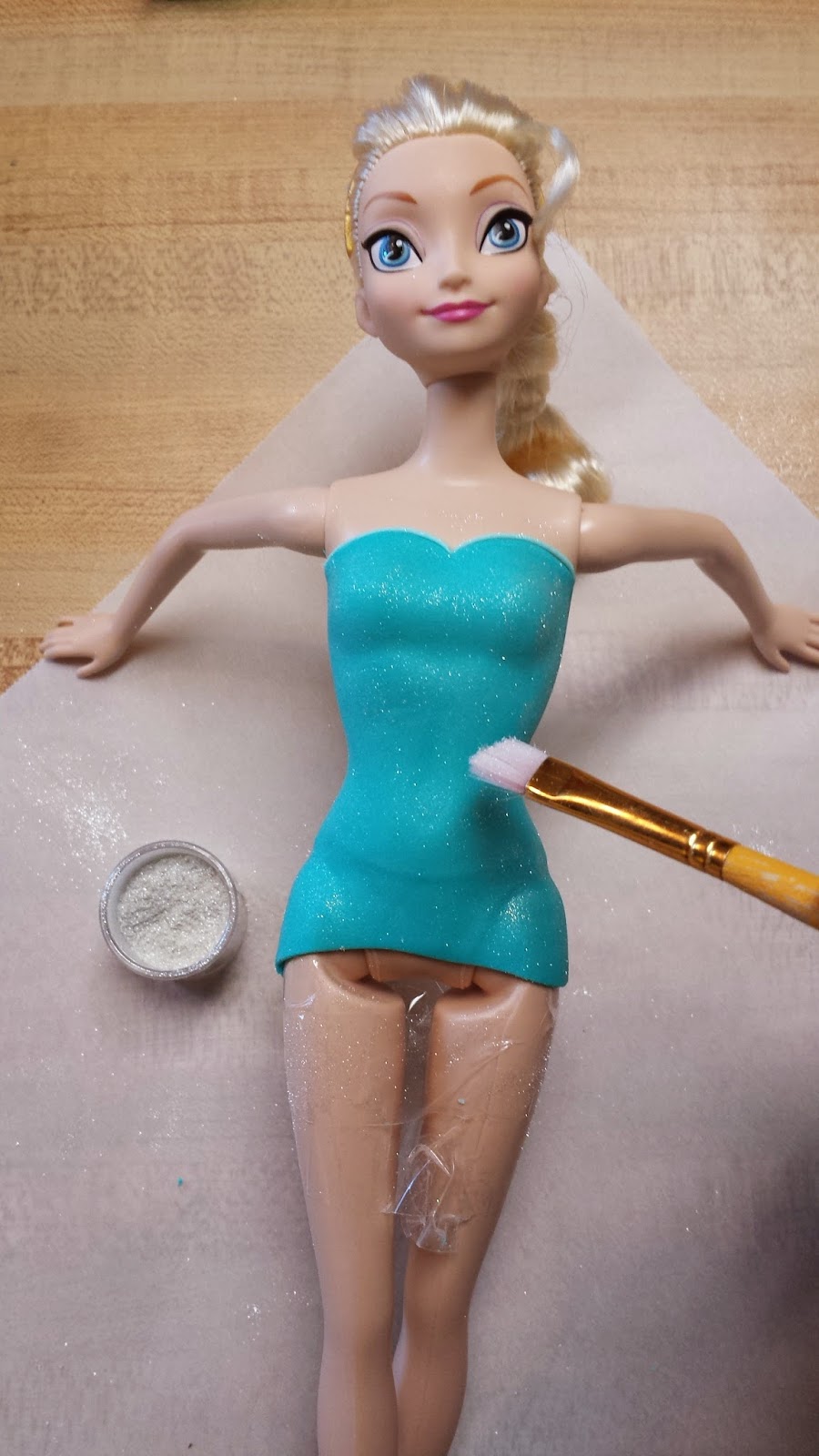 The other piece that I made in advance was the cake board.  I decided that I wanted to decorate this cake directly on the cake board, which would have been difficult if I had used a fondant-covered cake board.  So instead of covering my cake board with fondant, I stacked three white 12-inch cardboard cake circles and covered them with a layer of sheer, sparkly teal fabric.  Then I glued ribbon around the edge and covered the whole board with clear contact paper.  This made the board really easy to clean.  (It also worked out really well in the end because my niece asked if she could keep it to use it as a dance floor for her dolls.)  :-)

To make the cake, I used the Wilton Doll Pan and an eight-inch round pan.  When the layers were cool, I leveled them, filled them with frosting, and stacked them.  I ended up cutting the doll pan layer in half (horizontally) so that I could add an extra layer of frosting.  Then I cut a notch in the front of the cake where the doll would later stand.  I didn't take measurements to see how tall the cake was, but it came up to the middle of the doll's thigh. 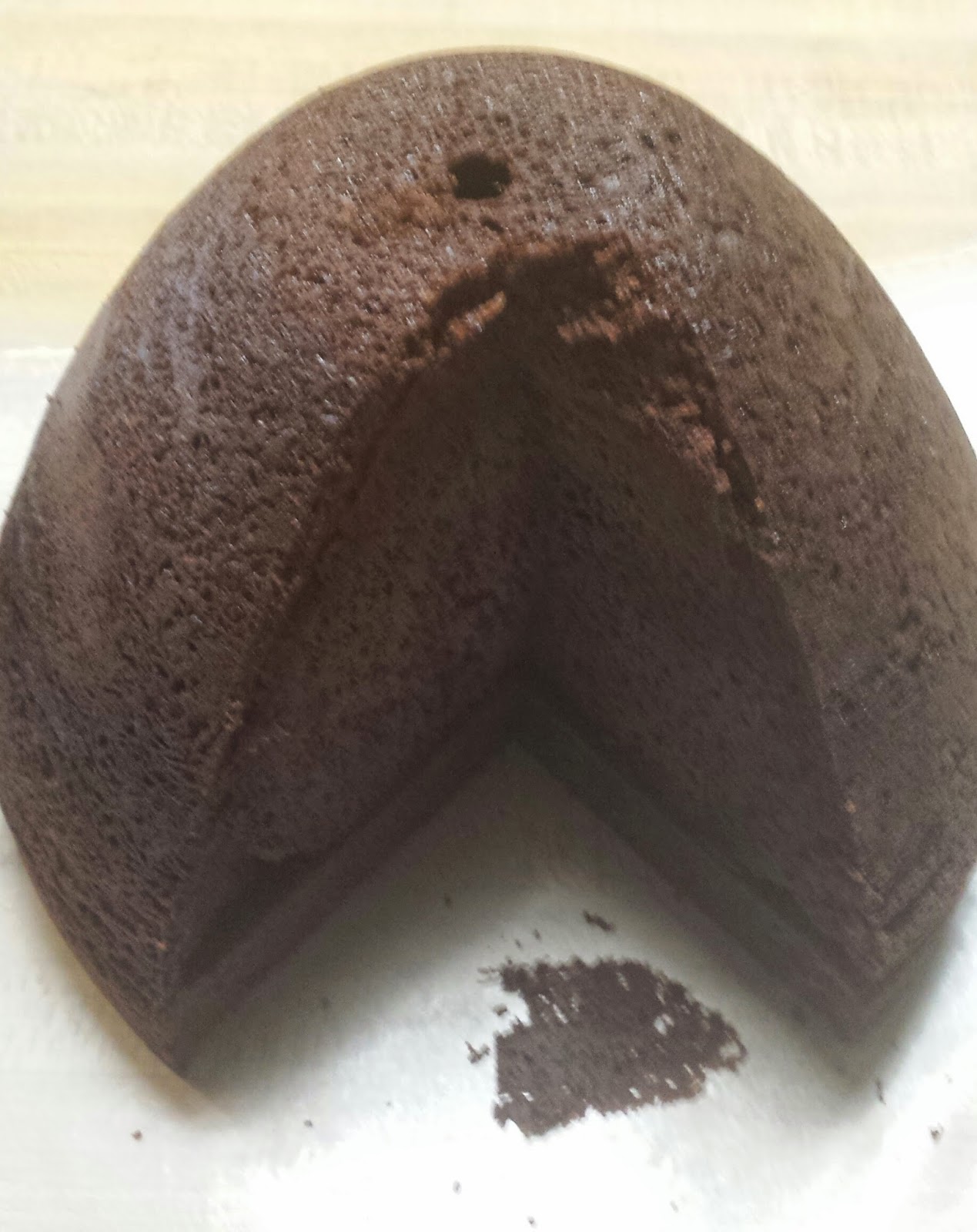 Next, I smoothed out the sharp angles (from where I had just removed the chunk of cake) with a serrated knife.  I used most of the parts that I had cut to fill in the back of the dress.  I attached these scrap pieces to the cake with chocolate frosting.  Here are side and top view photos of the cake at this point (along with a huge mess of cake scraps!). 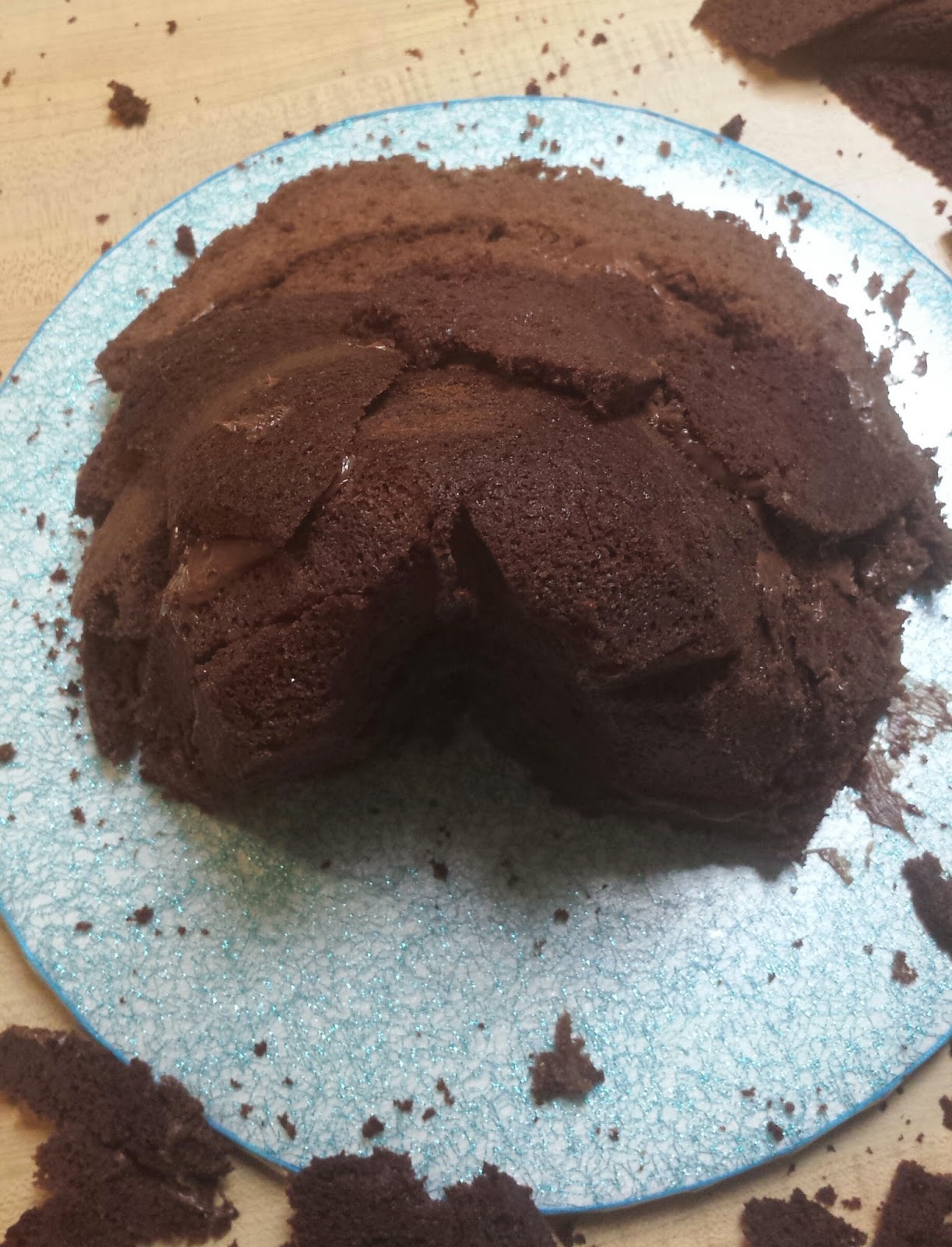 Once I finished attaching the scrap pieces, I covered the cake with a crumb coating of vanilla frosting and covered it with light teal fondant.  Then I cleaned up the cake board... The great thing about using cake boards that are covered with contact paper is that they are super easy to clean! 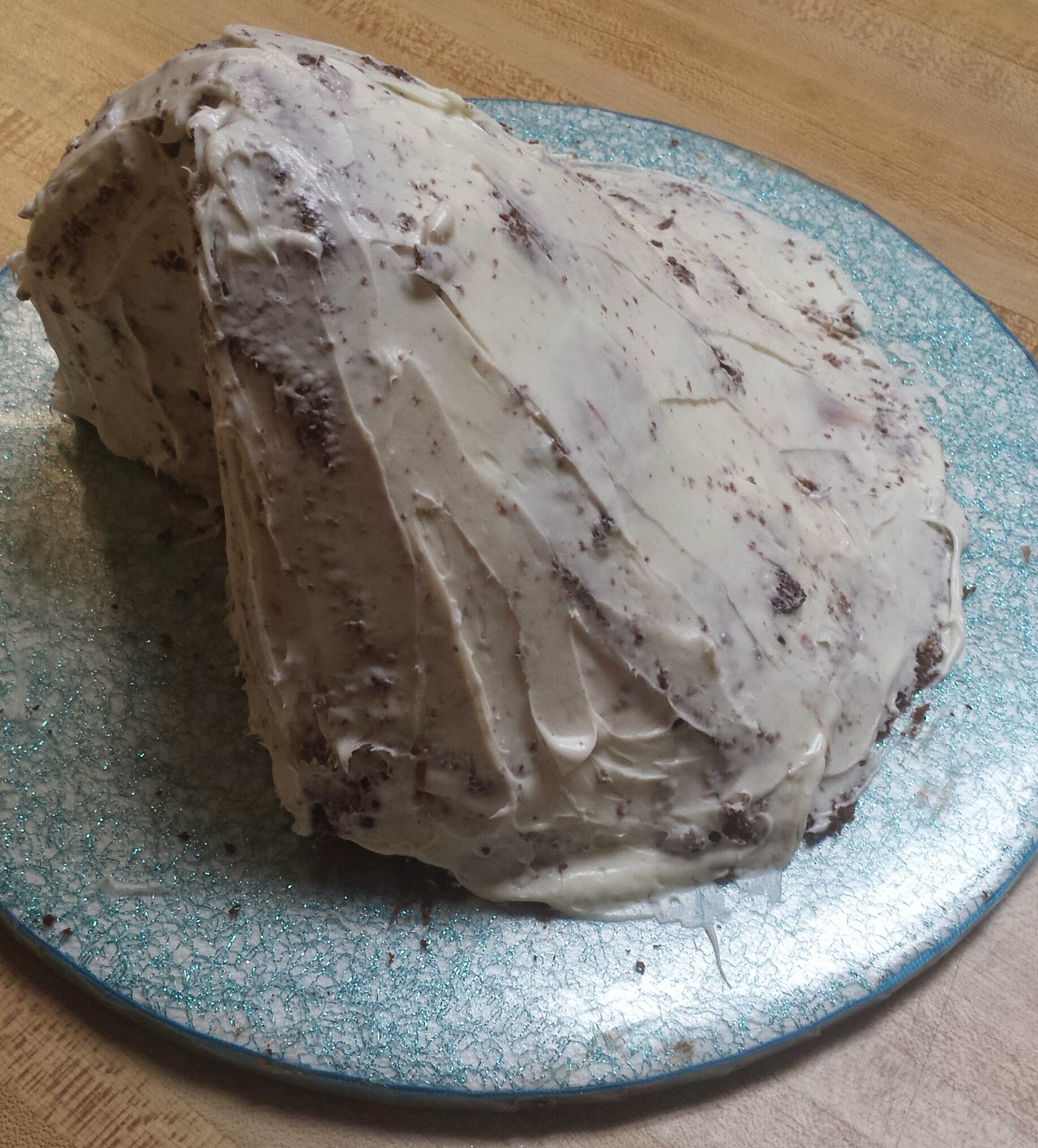 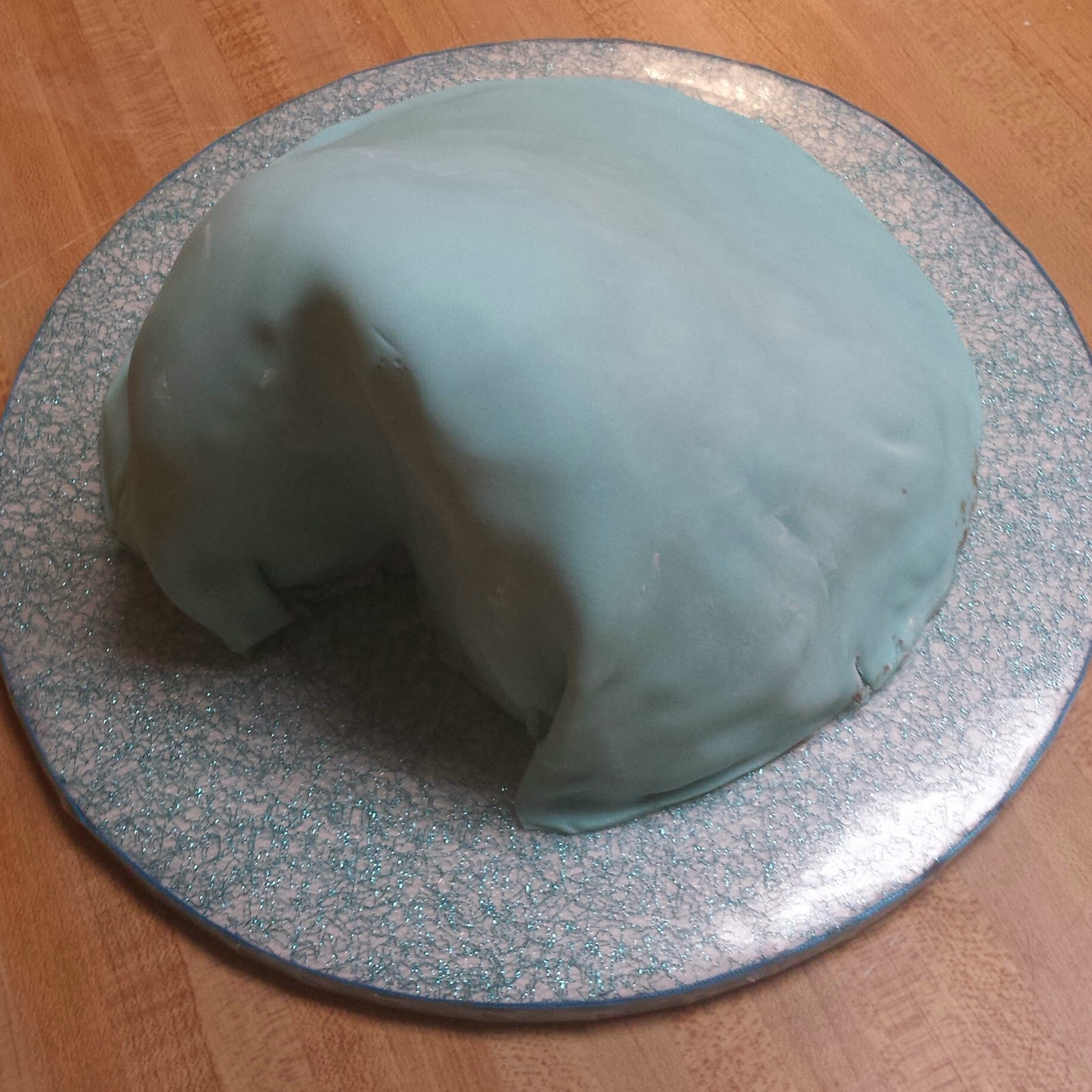 Next, I attached the doll to the cake.  To do this, I wrapped a wire around one of her legs and twisted it together in the back, leaving about three inches of wire protruding from the back.  Then I wrapped the wire with white electrical tape and pushed it downward into the cake so that her leg was in the notch that I had cut into the cake.  I used a strip of fondant (brushed with piping gel) to hold her back foot in place and I adjusted her legs to be in the position that I wanted them (unfortunately this doll came with non-bendable knees).  Adjusting her legs caused some of the top part of her dress to break off where her legs met her torso (as you can see in the picture below) but I ended up covering this part later, so it really didn't matter. 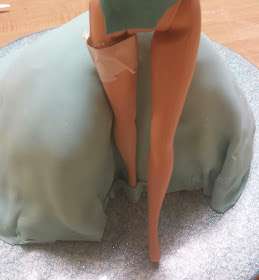 I also added a clump of fondant onto the back of the cake so that the dress would have a more gradual flow. 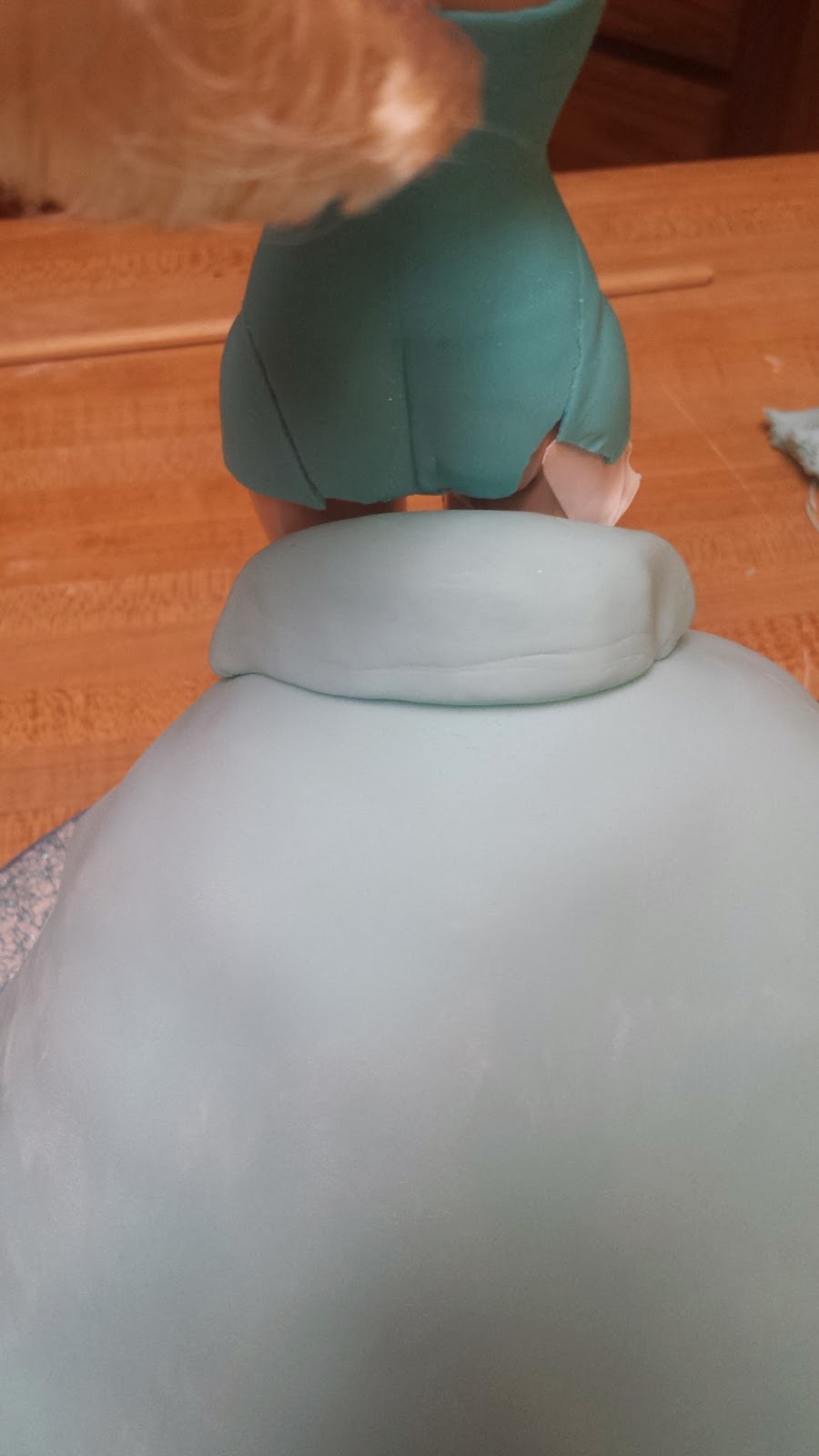 And now, the fun part!  The remainder of the cake is all about layering strips of fondant.  It's my favorite part because it is what gives the illusion of movement (a very important component to capture this dramatic scene of the movie) AND there is lots of room for error.  I didn't measure any of the strips of fondant that I used for this.  Instead, I just rolled out each strip, pleated it, attached it to the cake with piping gel, and then trimmed the bottom to my desired length.  I started by attaching a strip behind the knee of the front leg, bringing it out from behind her leg and then pulling it toward the back of the cake (so that it looks like the wind is blowing her dress back as she walks).  Then I added a diagonal strip starting from her left hip (our right), covering most of her front leg and all of her back leg/foot, and then sweeping back.  It's difficult to describe, but it's pretty simple.  Hopefully the picture will make sense: 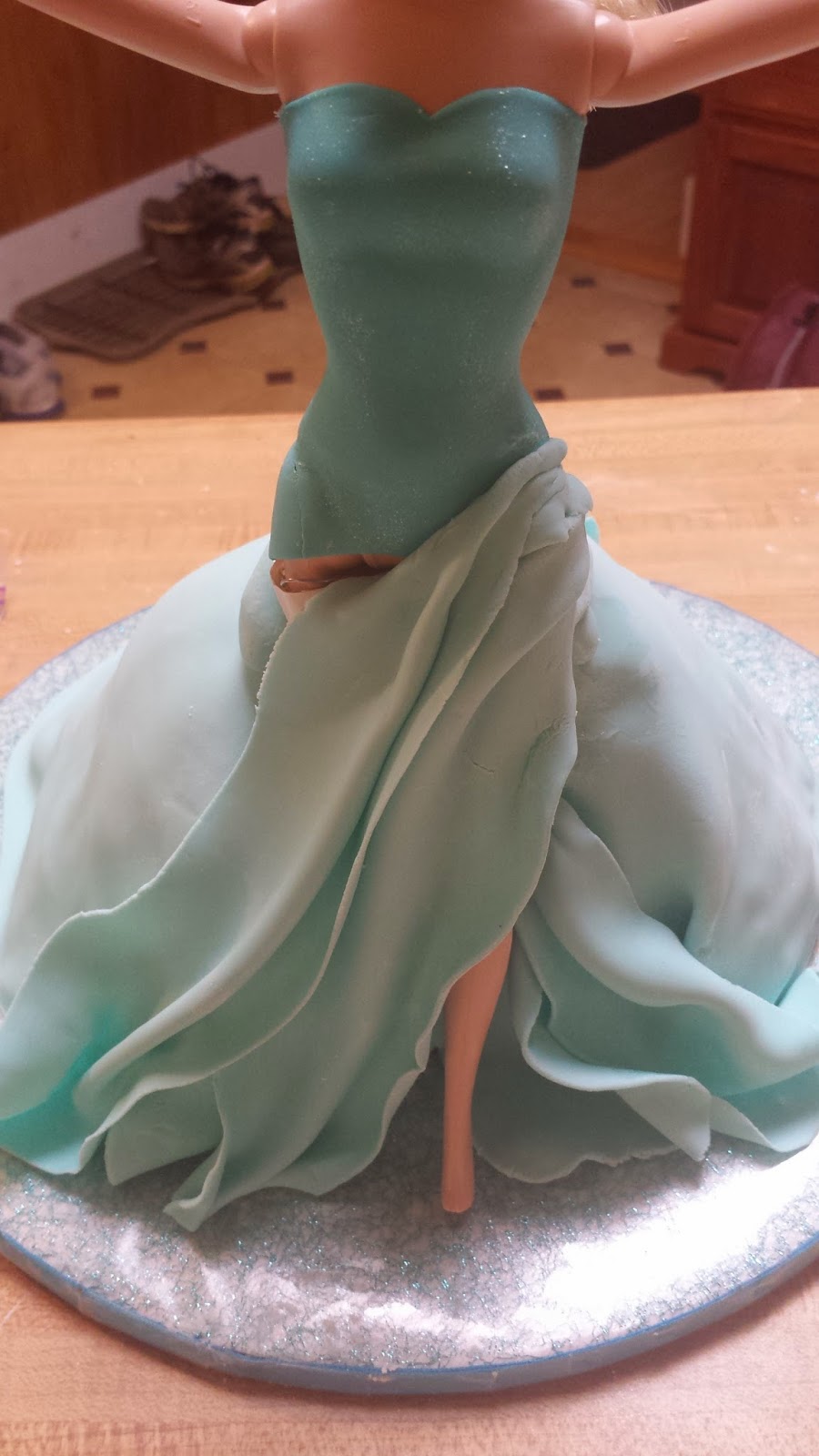 This part ended up cracking when I was moving the cake, so I had to try to add in another piece later on. :-(

Once I put these initial pieces on the front, I started working on the back and the sides of the dress.  For each of these pieces, I rolled out a strip of fondant (again, no measurement needed) and curved the sides with my fingers to give it a rippled effect.  Then I pinched the top edge and attached it to the piece of fondant just below Elsa's waist (This part got covered later, so it didn't need to look perfect).  For a couple of the strips, I made a little bit of a crease down the center, just so that they wouldn't all look exactly the same.  Once I attached all the strips to the side and back of the dress, I used a pizza cutter to cut and round the ends of the strips. 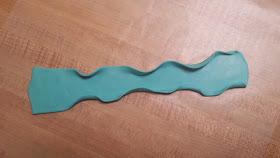 This is the only picture that I took during this stage.  I added the middle piece to the back first, then the sides, and then filled in the rest.  You can see where I initially added some white ruffles, which I later decided to remove and replace with another strip of teal. 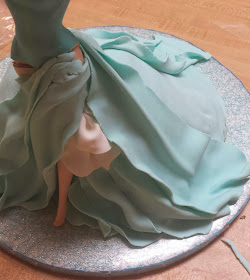 To finish off her dress, I added three shorter dark teal strip around her waist (this helped to cover up the spot where I attached the strips to the back/sides of the dress).  The first strip started at her right hip (our left) and wrapped around to below her left hip.  The second strip started at her left hip and wrapped around to the back.  The last strip started in the back and wrapped around to the front/center (this is another situation where it might just be easier to look at the picture).  To finish the cake, I added a few fondant snowflakes, and covered the entire cake with luster dust.  I also used a small triangle of dark teal fondant to cover the top of her exposed foot. 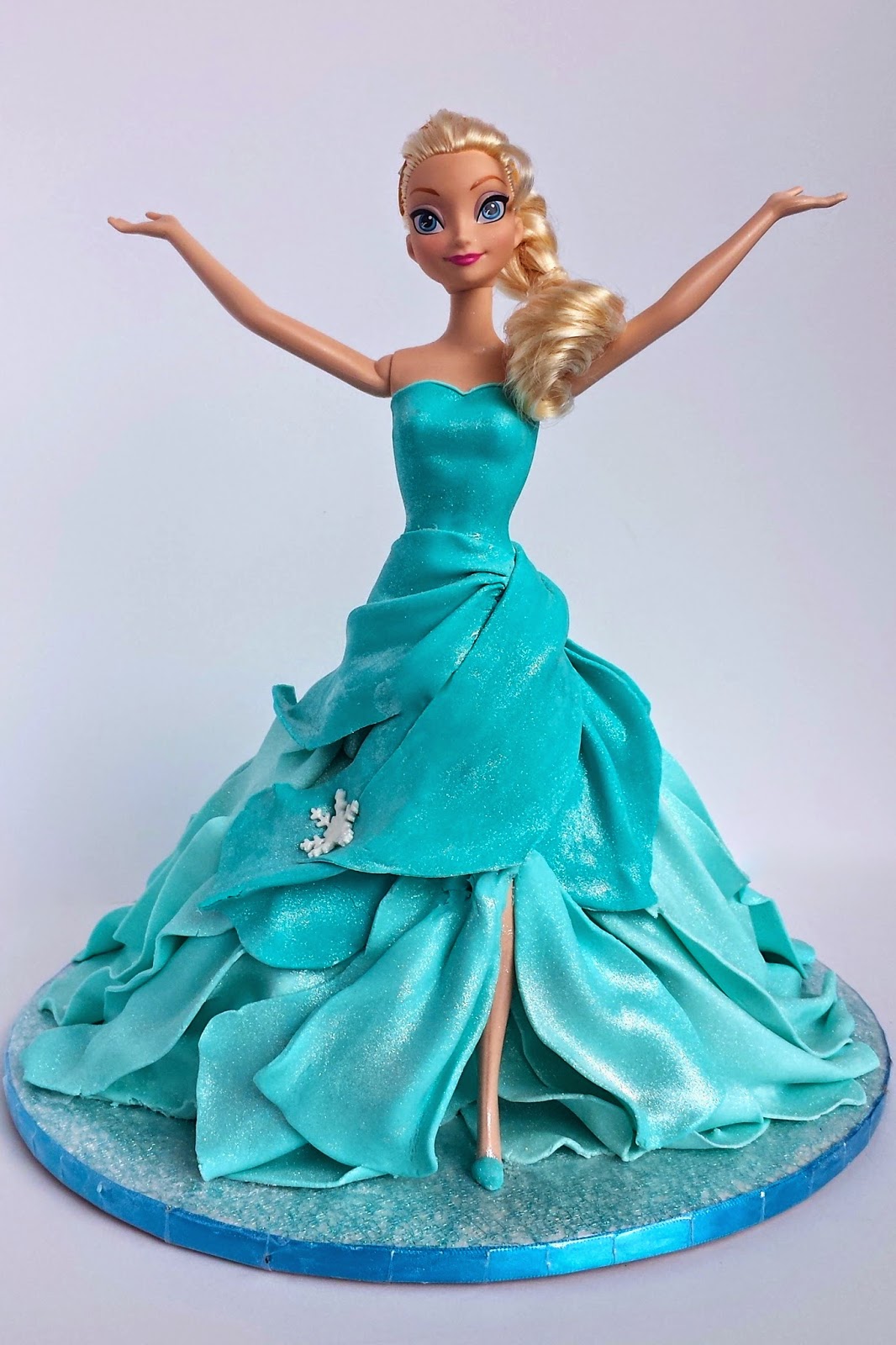 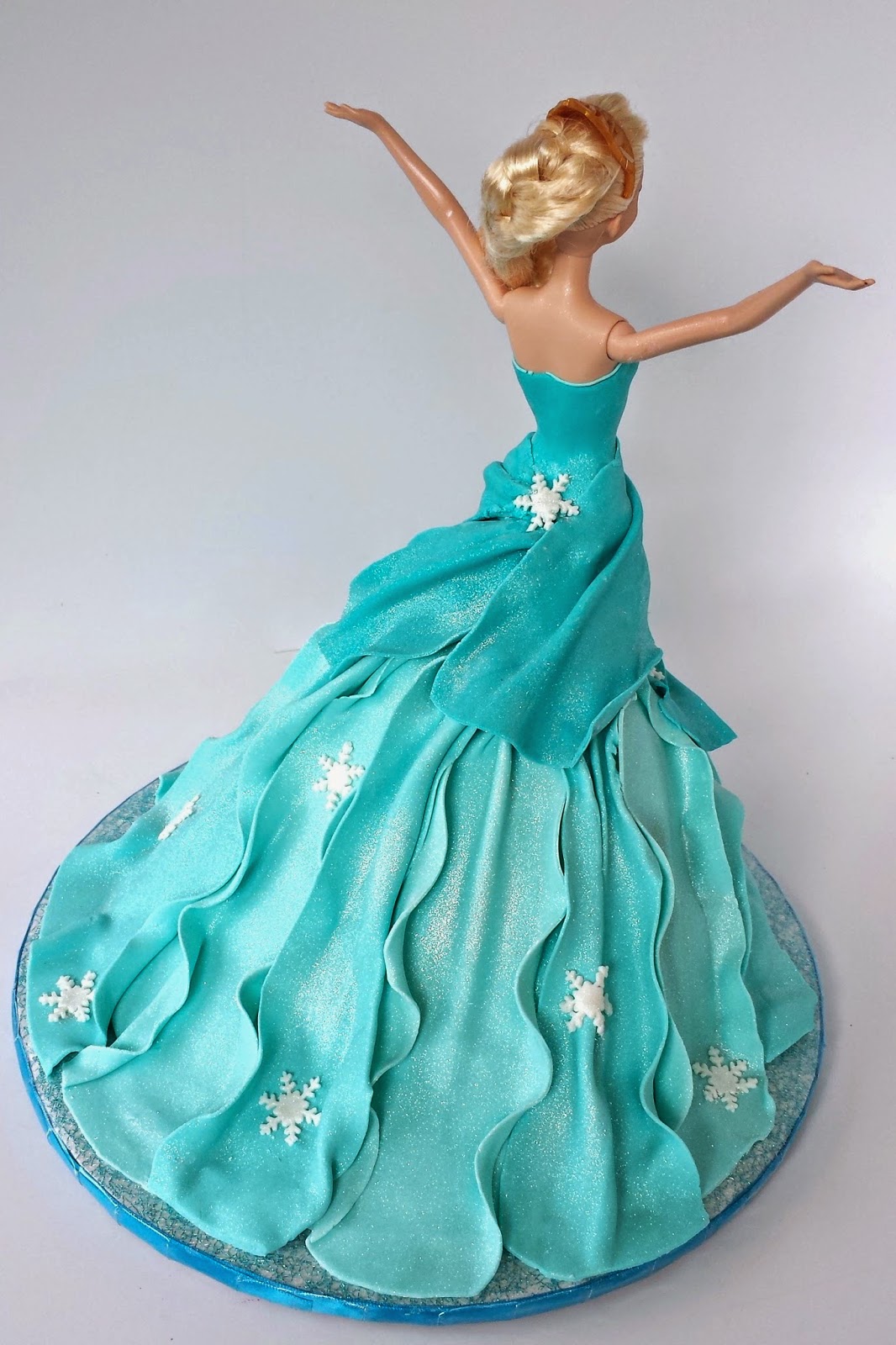 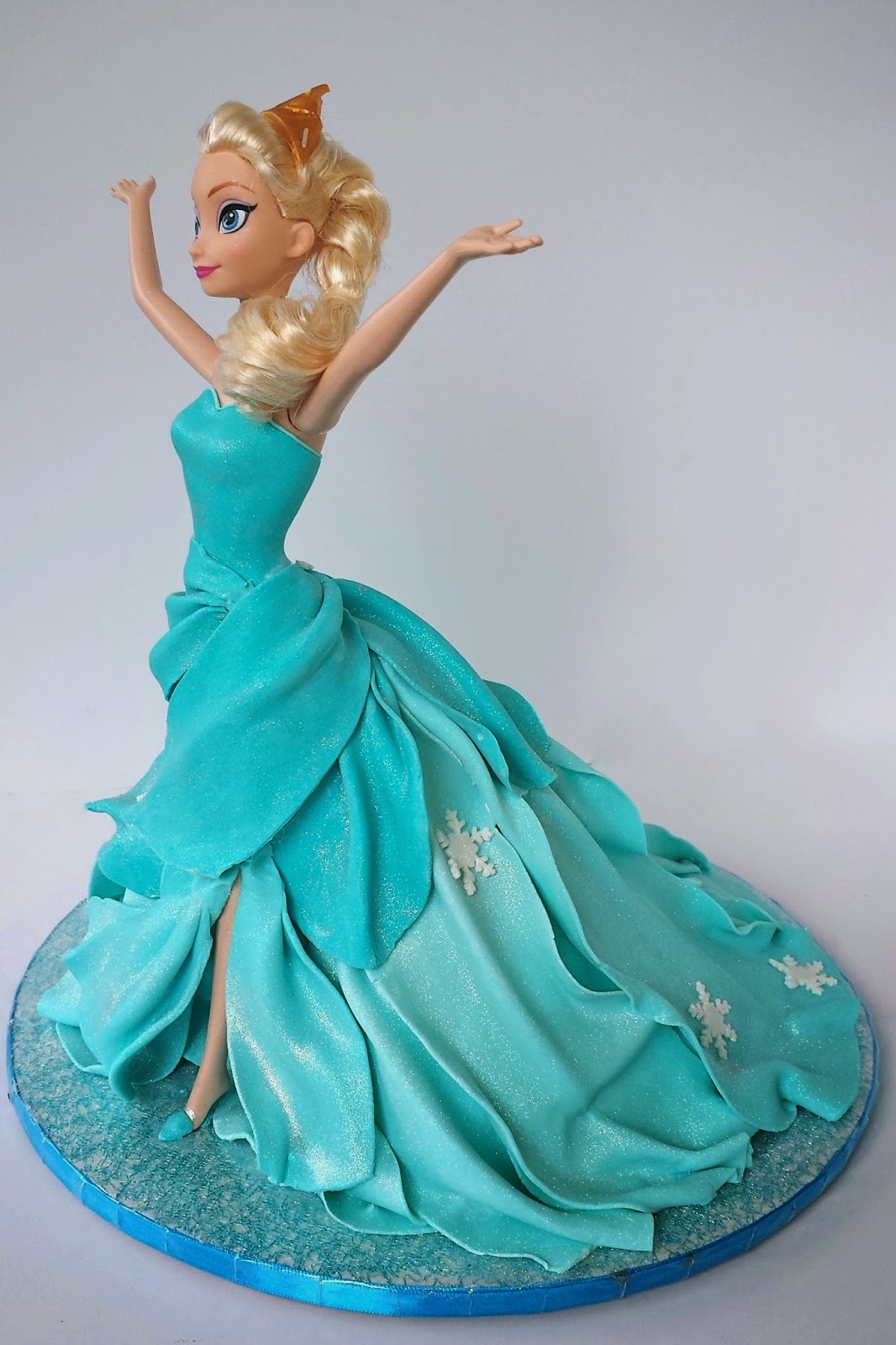 *It was recently brought to my attention that there is an original creator of the walking doll cake.  It was not my intention to copy any particular cake that I saw online; I was trying to replicate a particular scene from Frozen. If you are interested in purchasing a detailed, professional tutorial for walking doll cakes, please visit the Ipoh Bakery website.  Their cakes are amazing!  Here are some photos of their walking doll cakes: