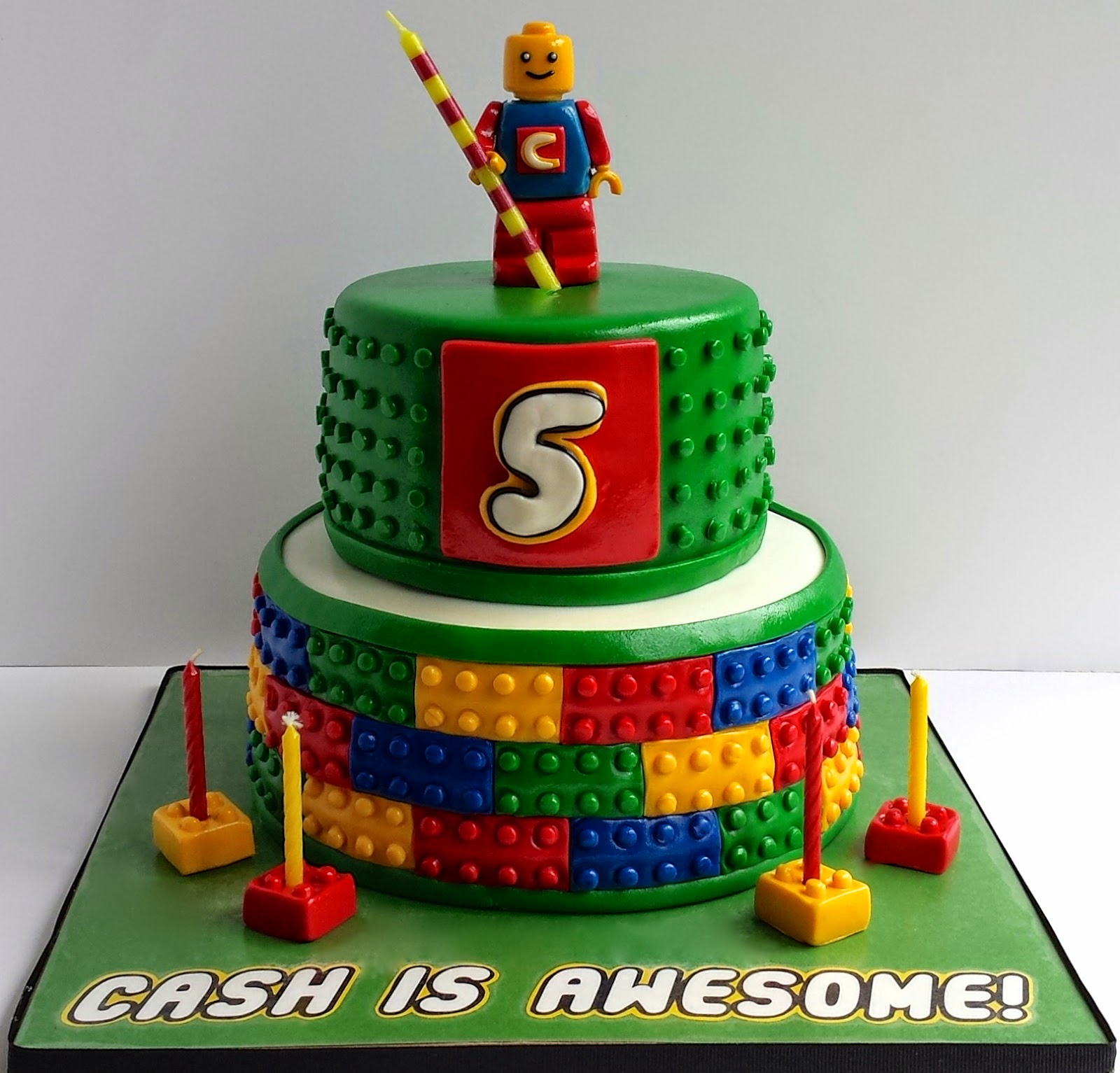 I made this Lego cake for my co-worker’s son.  He loves the Lego Movie, so I was asked to make a cake based on a picture that my co-worker found on the internet, with some minor alterations.  The cake itself was chocolate with chocolate frosting with an eight-inch bottom tier and a six-inch top tier.  I ended up ordering a mold set for theLegos and the Lego man from Amazon for $10, but if I were to make this cake over again, I would not use the molds... I ended up doing more work as a result of the molds not working exactly as I had planned. 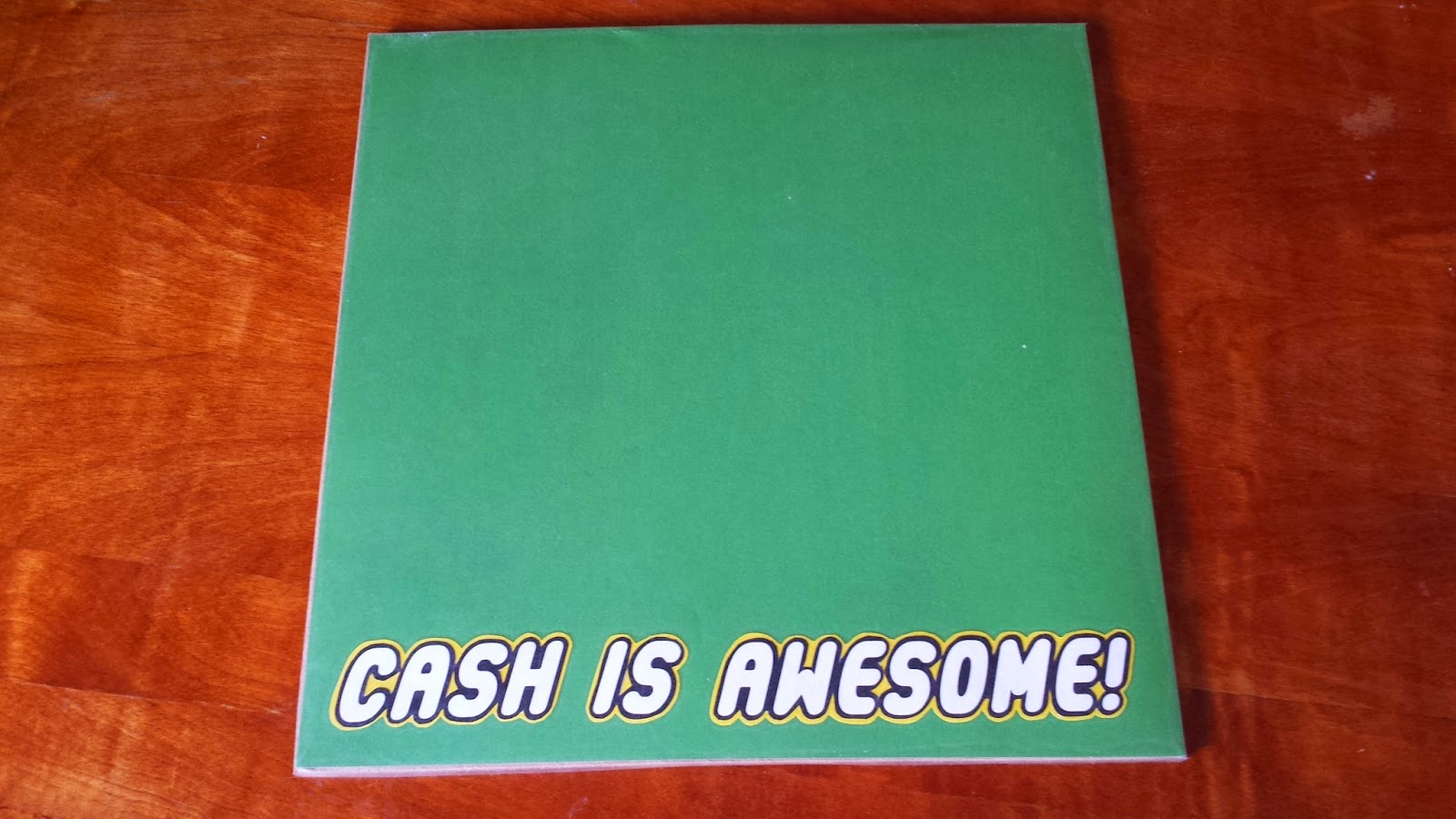 To start, I  made the topper and the cake board several days in advance (since I was planning on going camping for a few days!).  I used a 12-inch square Masonite cake board and placed a green piece of scrapbook paper over it.  Then I went online to download a free Lego font.  I printed "Cash is Awesome" on white paper, cut it out, glued it to a piece of yellow paper, and then cut it out again.  Then I glued the words onto the scrapbook paper and covered the whole board with clear contact paper.  (I love this method of covering cake boards because it's quick and it saves time and money!) 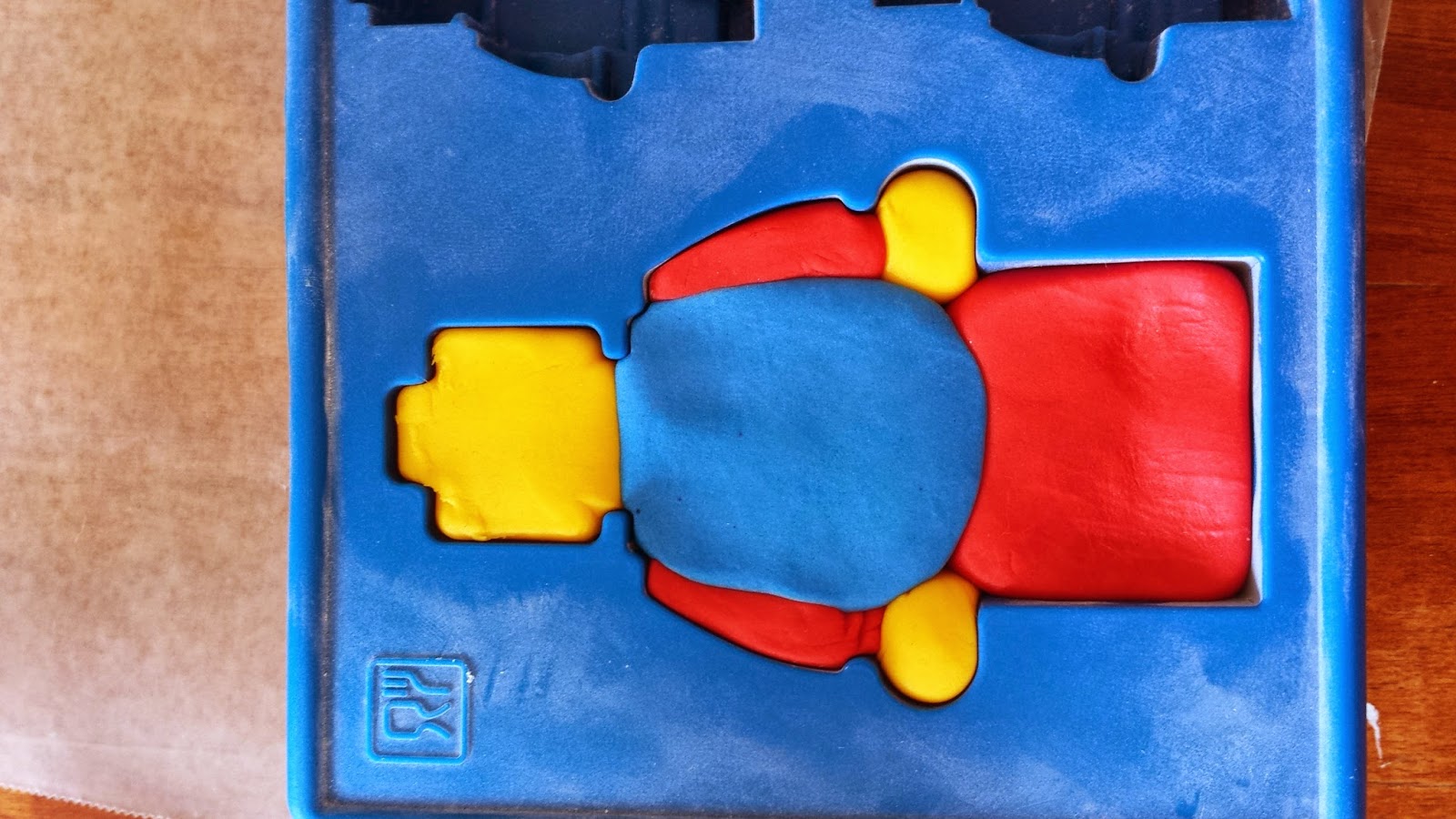 For the topper, I mixed my fondant with some Tylose powder so that it would harden.  Then I pressed the various colors into the mold.  When I removed the man from the mold, I didn't like the way it looked, so I ended up cutting the arms, legs, shirt, and head apart and fixing them up before reattaching them.  If I were to do this over again, I would probably just cut out a trapezoid for the shirt, and a rectangle for the pants.  Then I would cut a slit to separate the legs and make indentations/bends in the legs with the side of a paintbrush.  I would roll the head out in my hands and flatten the top and bottom, and then add a small circle of fondant to the top of the head, and a slightly larger circle for the neck.  Then I would roll two small cylinders of fondant in my hands for the arms.  The hands are just small strips of yellow fondant curved into a C shape and attached with piping gel.  The eyes and mouth were made from tiny pieces of black fondant, with a dot of white fondant on each eye.  I put a bamboo skewer up through the guy, put a candle in his hand, and laid him flat to dry.  When he was dry, I sprayed him with edible glaze to give him a "plastic-y" look. 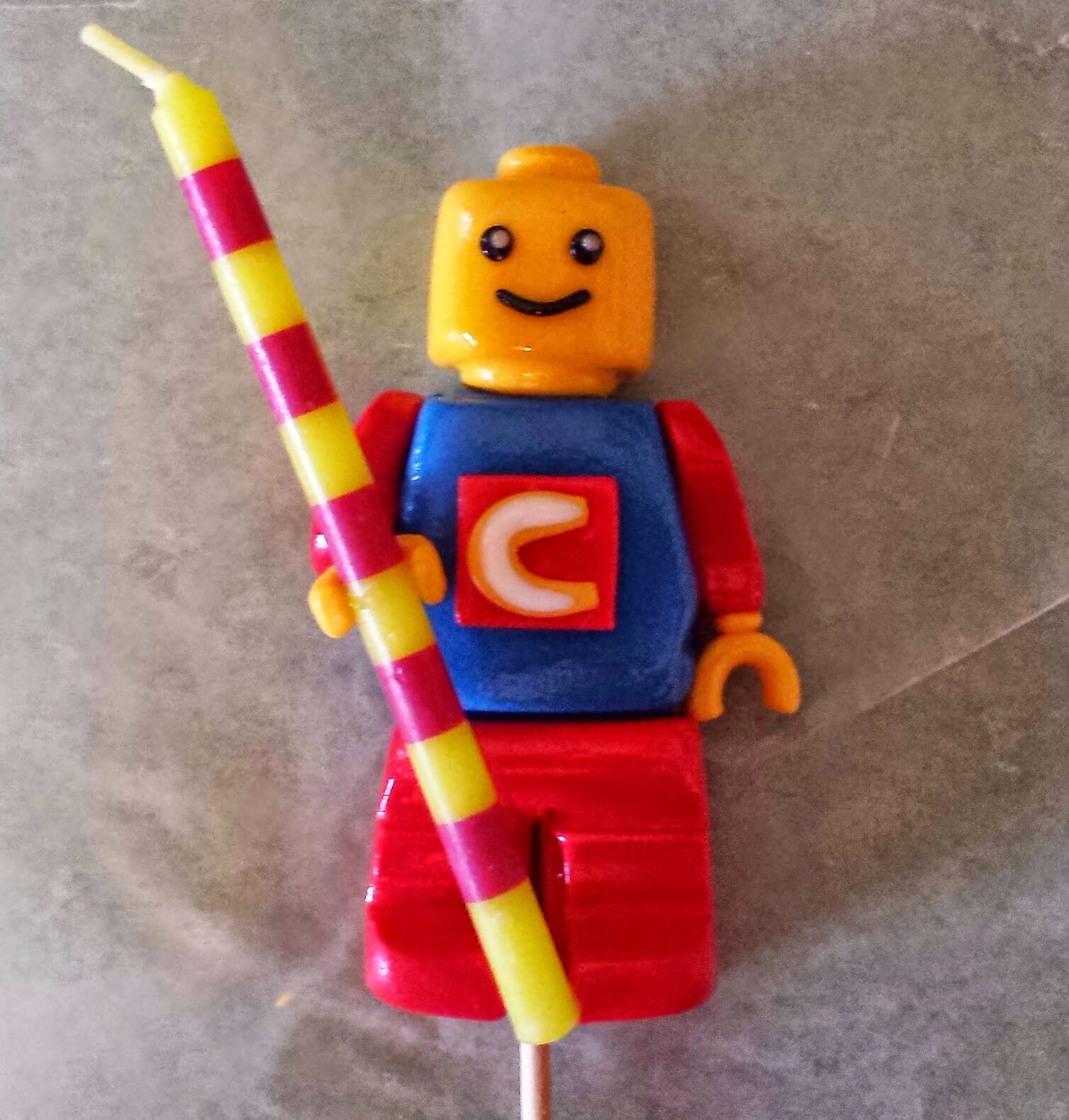 When the cake was cooled, filled, and frosted, I covered the bottom tier with white fondant and the top tier with green fondant.  After measuring the height of my cake, I realized that my Legos would not be exactly the right height, so I added a strip of green fondant around the base with my clay extruder.

To make the Legos, I originally tried using the mold, but it was too deep, so I cut the textured portion out and used it to make impressions on a rolled piece of fondant.  Then I cut each "Lego" from the strip of fondant and attached them to the cake with piping gel, starting at the bottom.  If I were to make this cake again, I would probably just cut out Lego-sized strips of fondant and use a frosting tip to cut out dots to add to the strips. 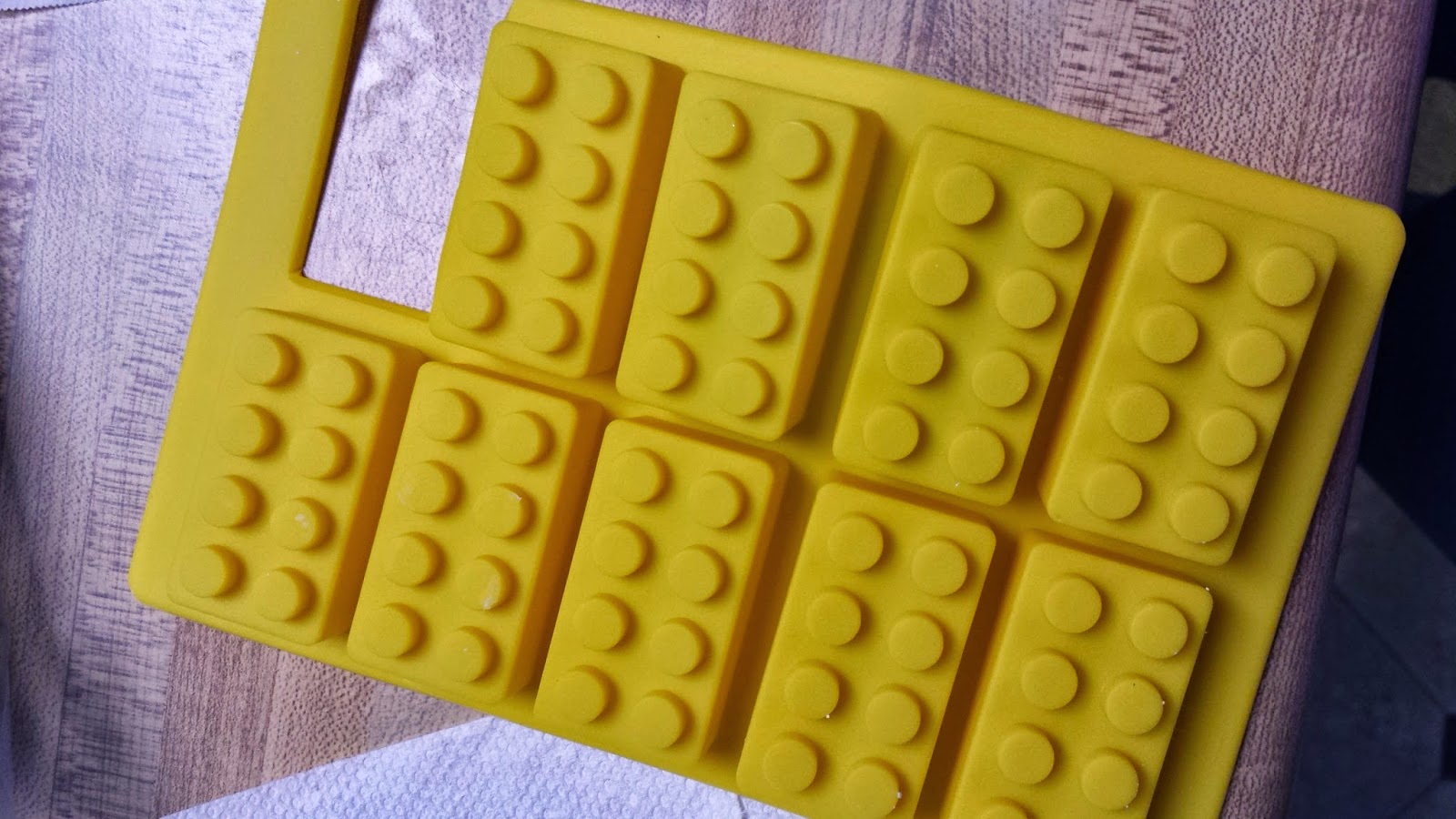 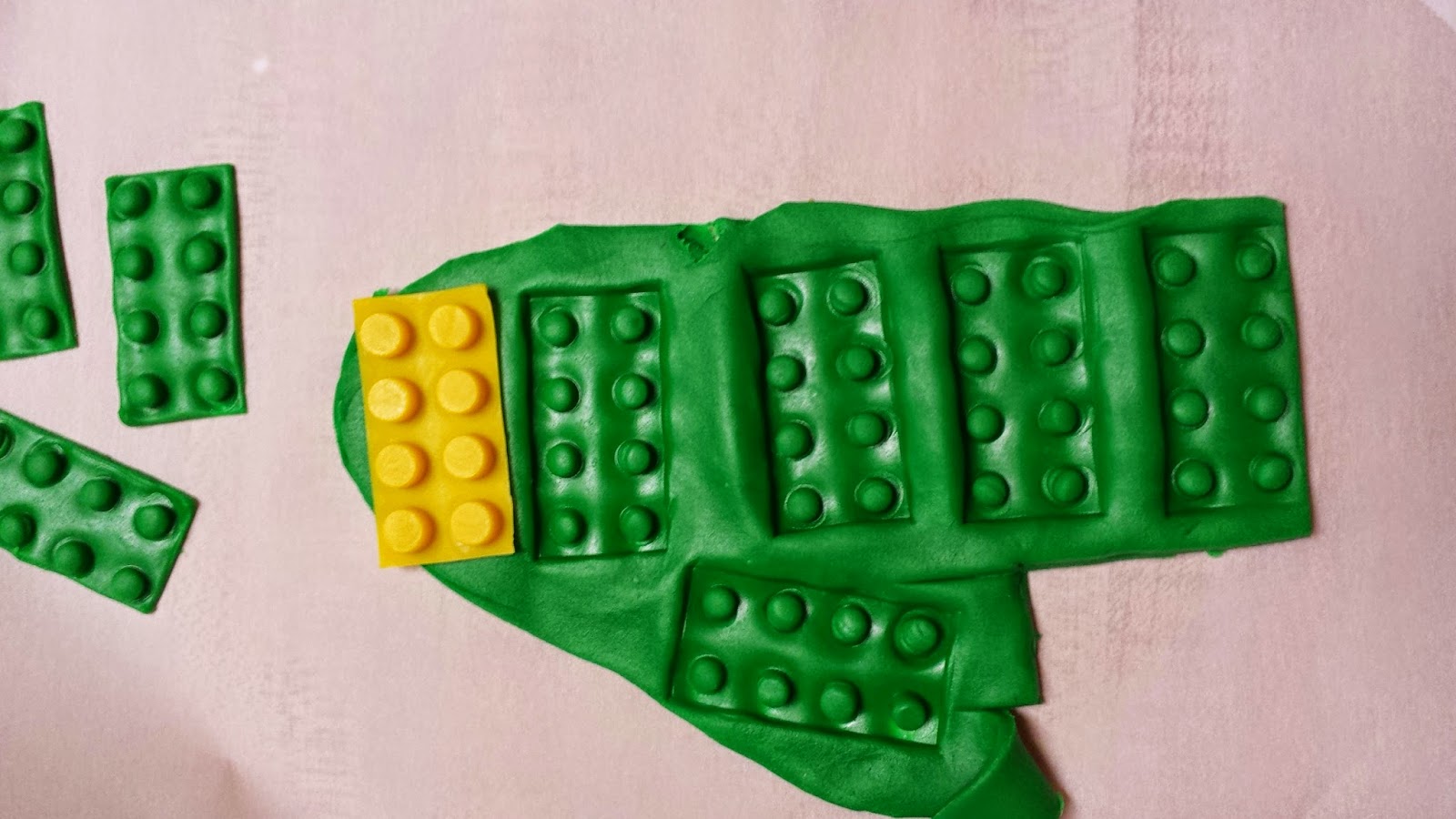 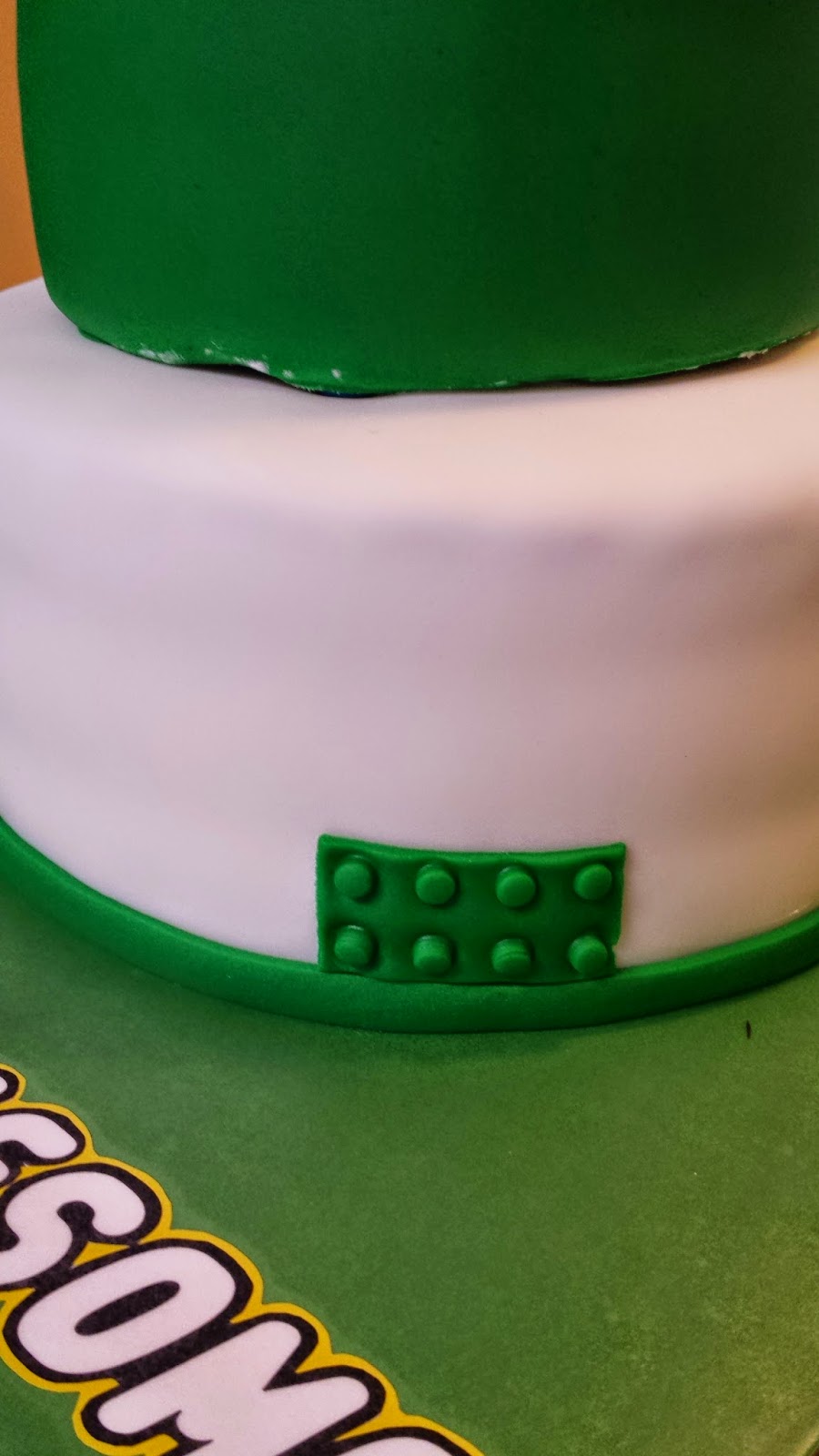 Once I covered the bottom tier, I decided to add another strip of fondant, with the clay extruder, above the Legos. 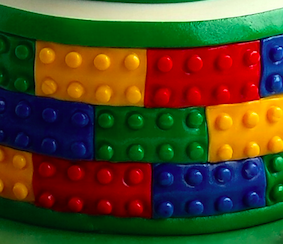 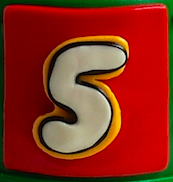 Next, I cut dots from a strip of green fondant using a frosting tip and attached them to the top tier with some piping gel.  Though this part was extremely tedious, it helped to brush the piping gel onto a section and then add several dots at a time.

Lastly, I added another extruded strip of green fondant around the base of the top tier, sprayed the whole cake with edible glaze, and added the topper.  On a last-minute whim, I decided to add some candles.  I cut four squares of fondant and used a frosting tip to make dots for the tops.  Then I pressed candles down into them and attached them to the cake board with piping gel. 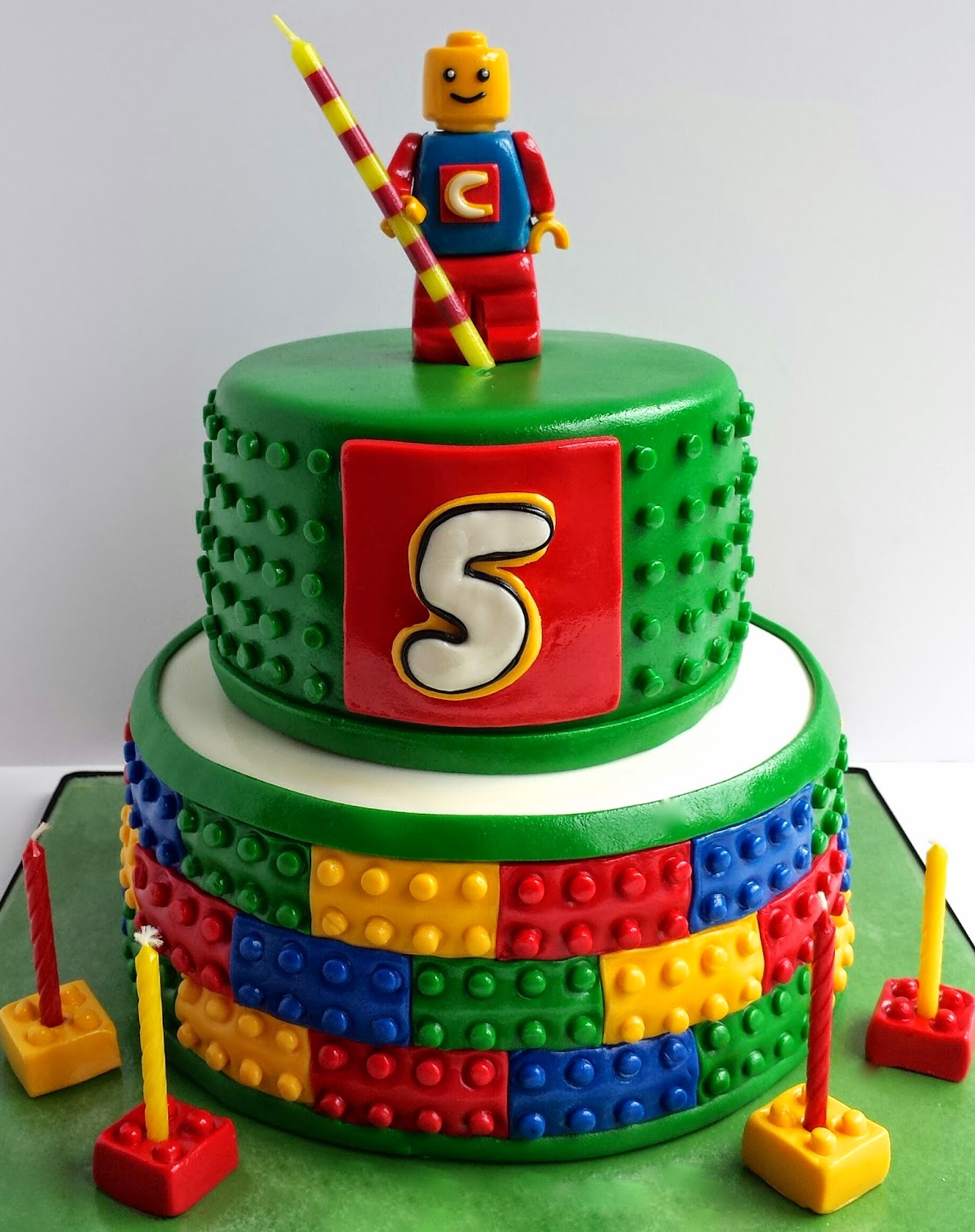