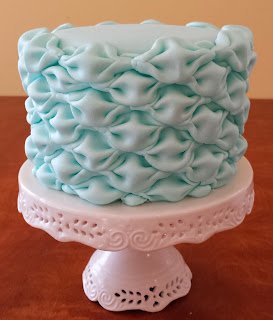 For Mother's Day this year, I wanted to create something that was simple, yet elegant. I had recently seen some billowed fondant cakes on Pinterest and I was dying to try that technique. After a thorough Google search, I was able to find a couple of different tutorials as a guideline, but the end result wasn't exactly what I was looking for, so I modified the technique to meet my needs and this is what I came up with. My mom liked it, and I hope you do, too! 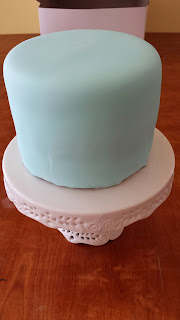 To start, I made a four-layer six-inch cake and covered it with fondant (this cake is chocolate with raspberry filling).  It doesn't need to be perfect at this point because it will be almost completely covered with "billows."  If you're  wondering about the color, it's Wilton's teal gel food coloring, and it only took a little bit to achieve this color.

For the billows, begin by rolling out a long strip of fondant.  I played around with various thicknesses and decided that it's easiest to work with when it's pretty thin, but not super thin (I know... what a great quantitative measurement, right?).  Basically I think it looks the best when it's thin enough to show the detail of the folds, but thick enough to hold its shape and still be stretchable.  This could be different for different types of fondant.

Next, use a handy-dandy meter stick to cut the strip into two-inch squares.  And, yes, they must be exactly two-inch squares with perfect right angles at every corner, or else the world will come to an end.  Just kidding.  Also, I'm not sure why this picture is upside down, but it's not allowing me to rotate it.  Sorry!  I'm sure that you know what a strip of fondant would like right-side-up. :-) 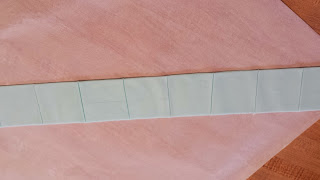 Once you've got lots of little squares, you can start making some pleats!  Start by accordion folding each end and pinching them shut.  Some websites recommend "gluing" them shut, but they seem to stick together well enough without the glue, so you can save yourself some time and skip the glue. 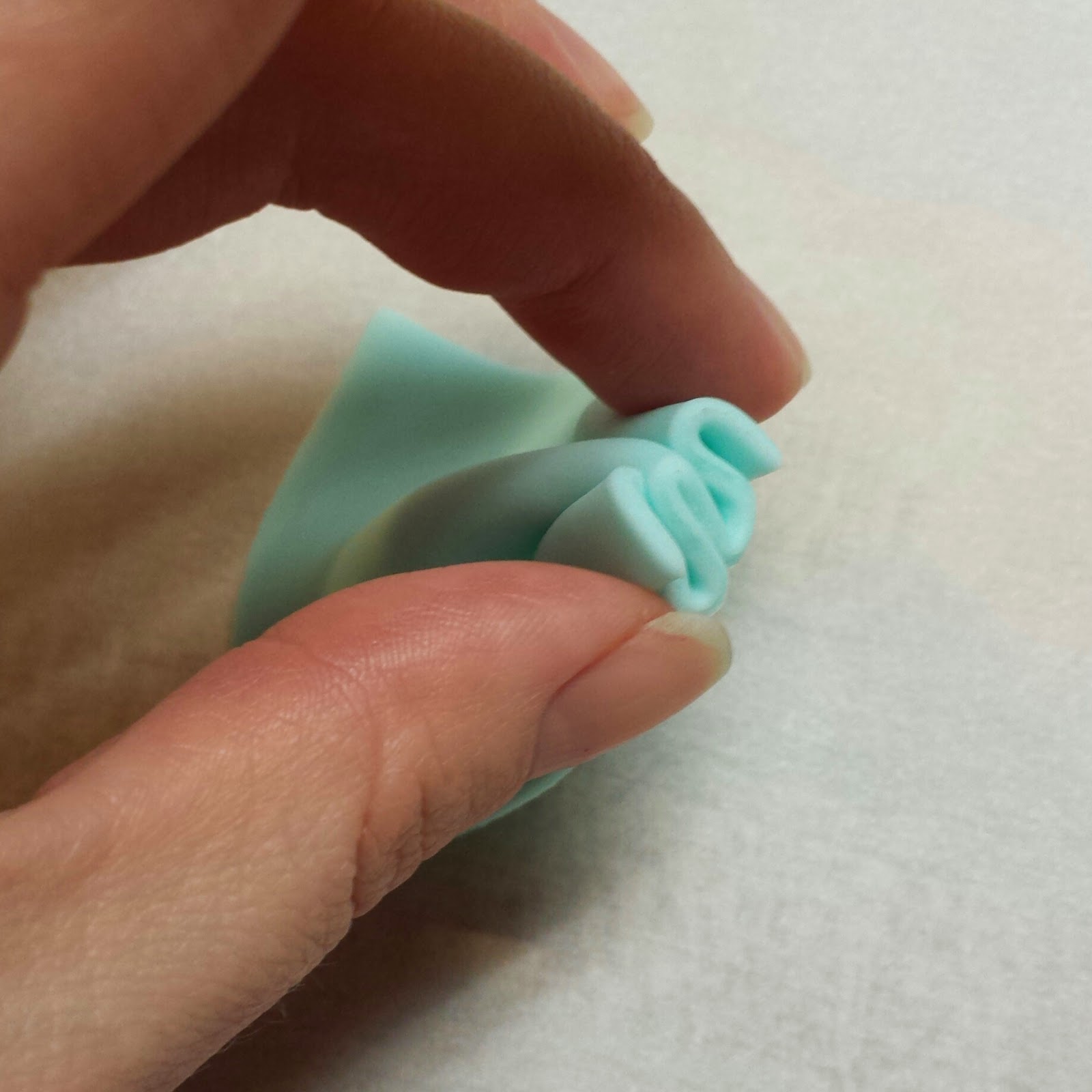 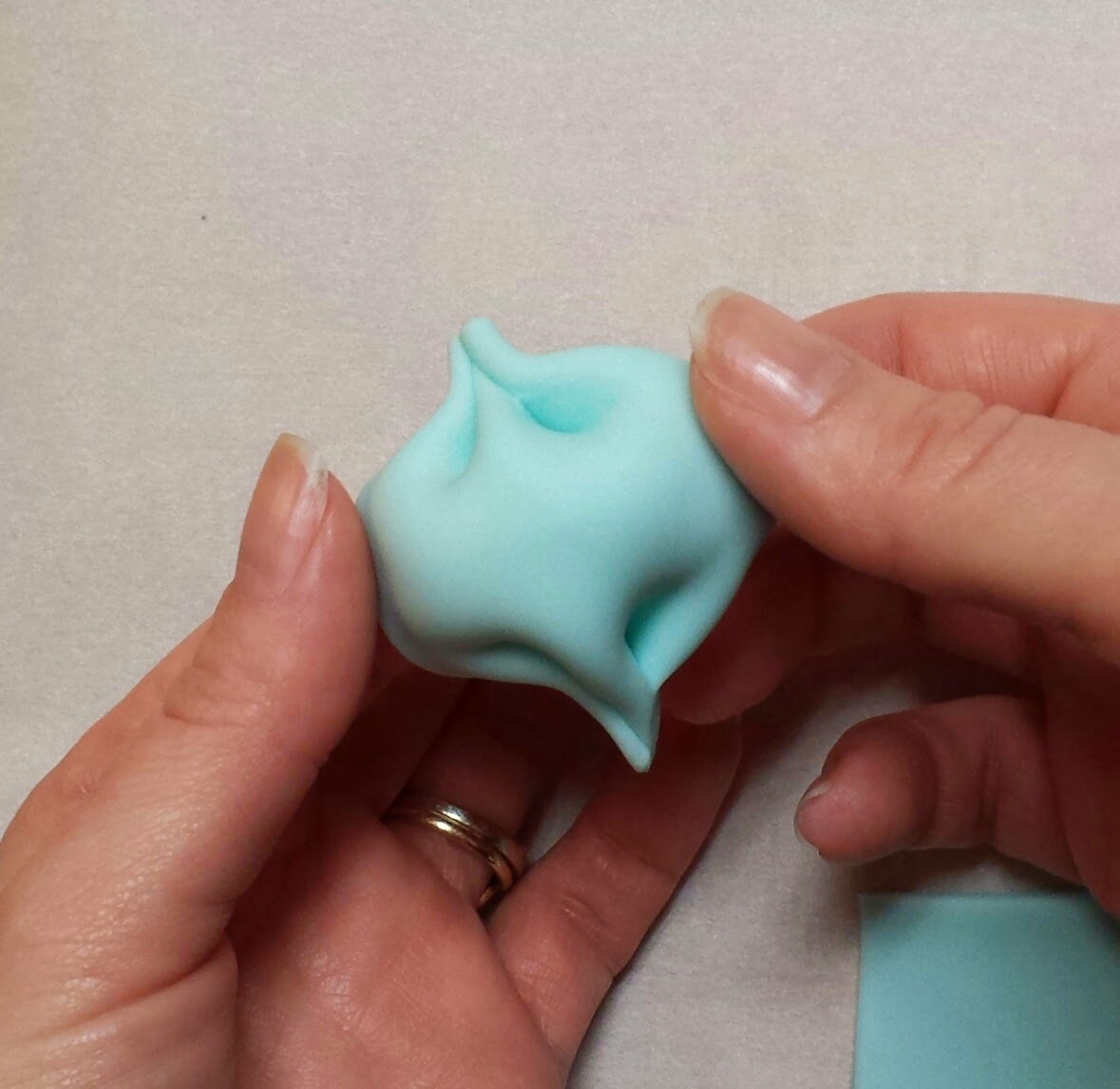 Pinch/shape the billow to exaggerate the pleats. 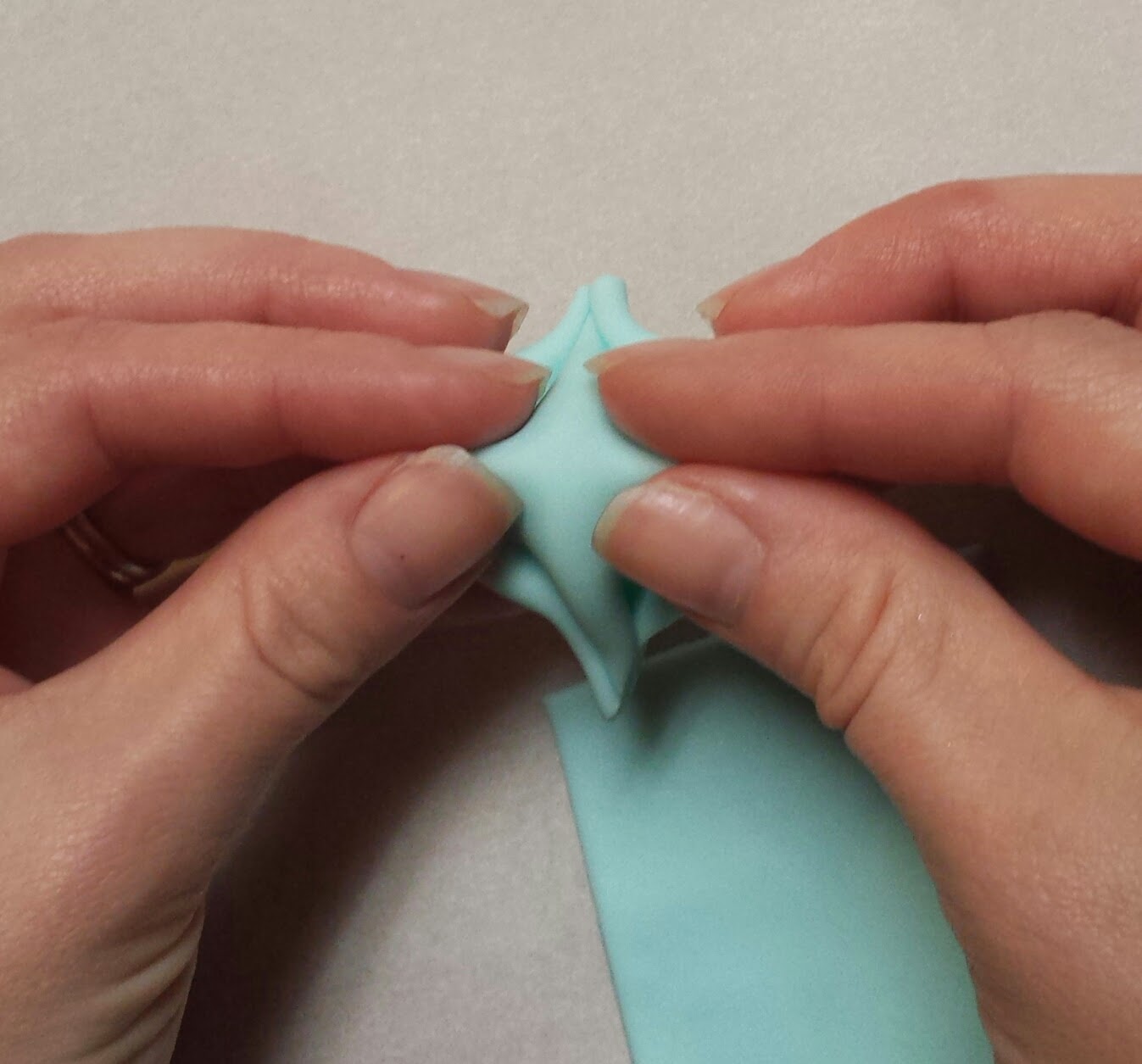 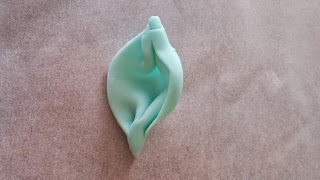 Brush edible glue, piping gel, or water onto the backs of your billows to attach them to your cake.  Try to keep them lined up vertically and horizontally with the other billows.  You might be able to see that I used a ruler to make impressions on the cake, but I ended up not really needing to use them.  I think it is easier, and more time efficient, to "eyeball" it.  :-)  Each new row of billows will cover the meeting points and the flattened tops of the previous billows.  If you would prefer to put sugar pearls or flowers between each billow, you might want to space them farther apart. 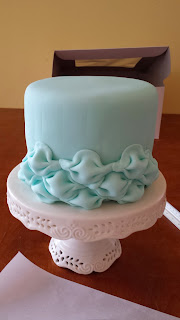 When you get to the top row, instead of folding the top of each billow out, fold it under, like you did on the bottom of each billow.  This will create a neater edge around the top of the cake. 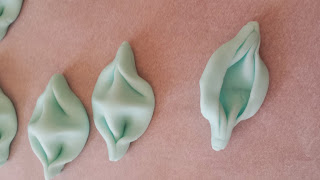 Once all of the rows have been completed, go back and fill in the gaps along the bottom row with little bits of fondant. 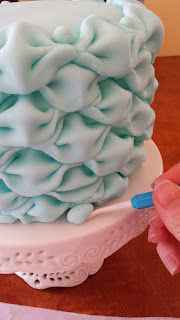 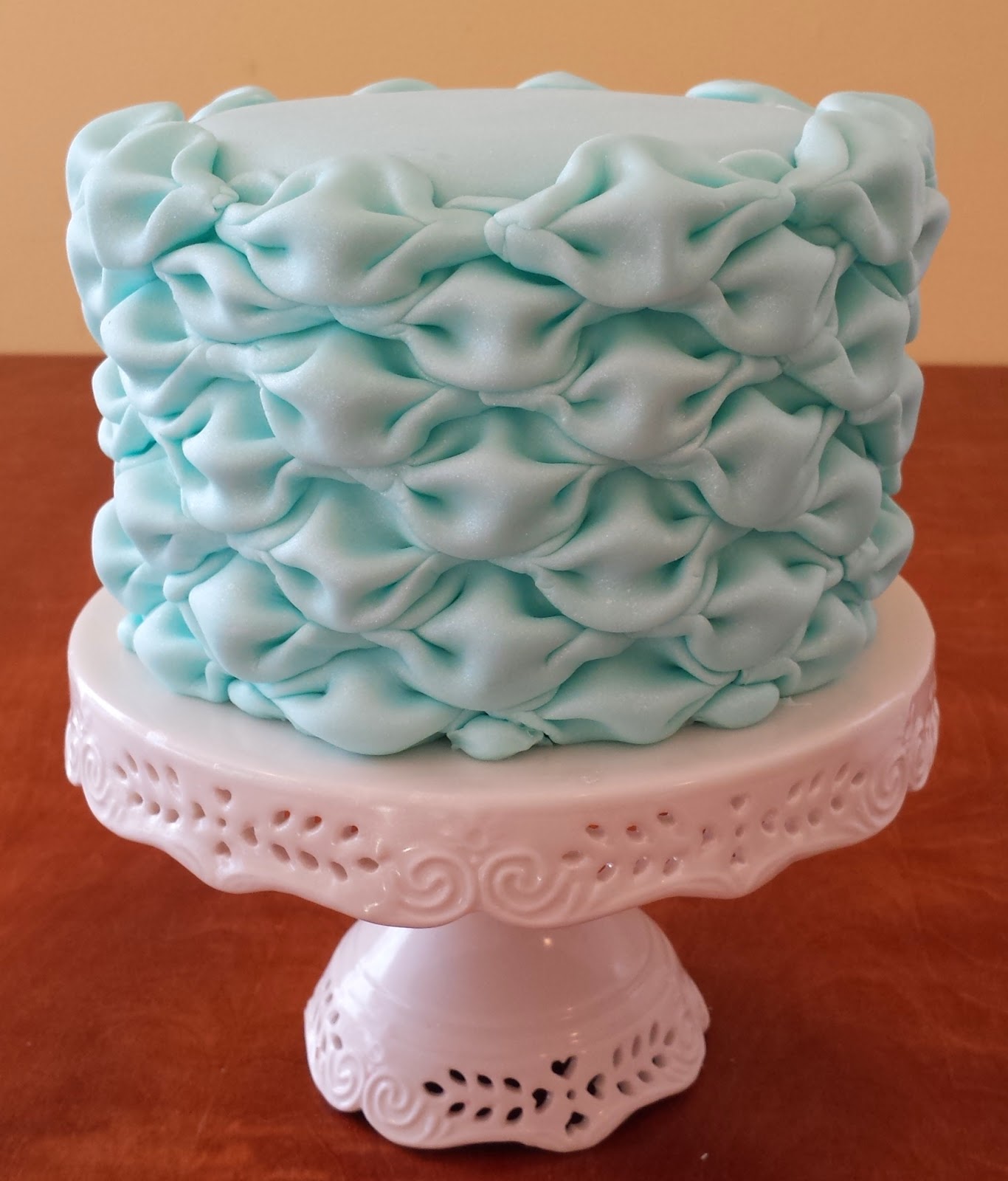 I wanted my mom's cake to have a satiny finish.  Since I don't have an airbrush, I used PME's Edible Lustre Spray.  You could also use luster dust, but I really like the pearlescent finish of the spray. 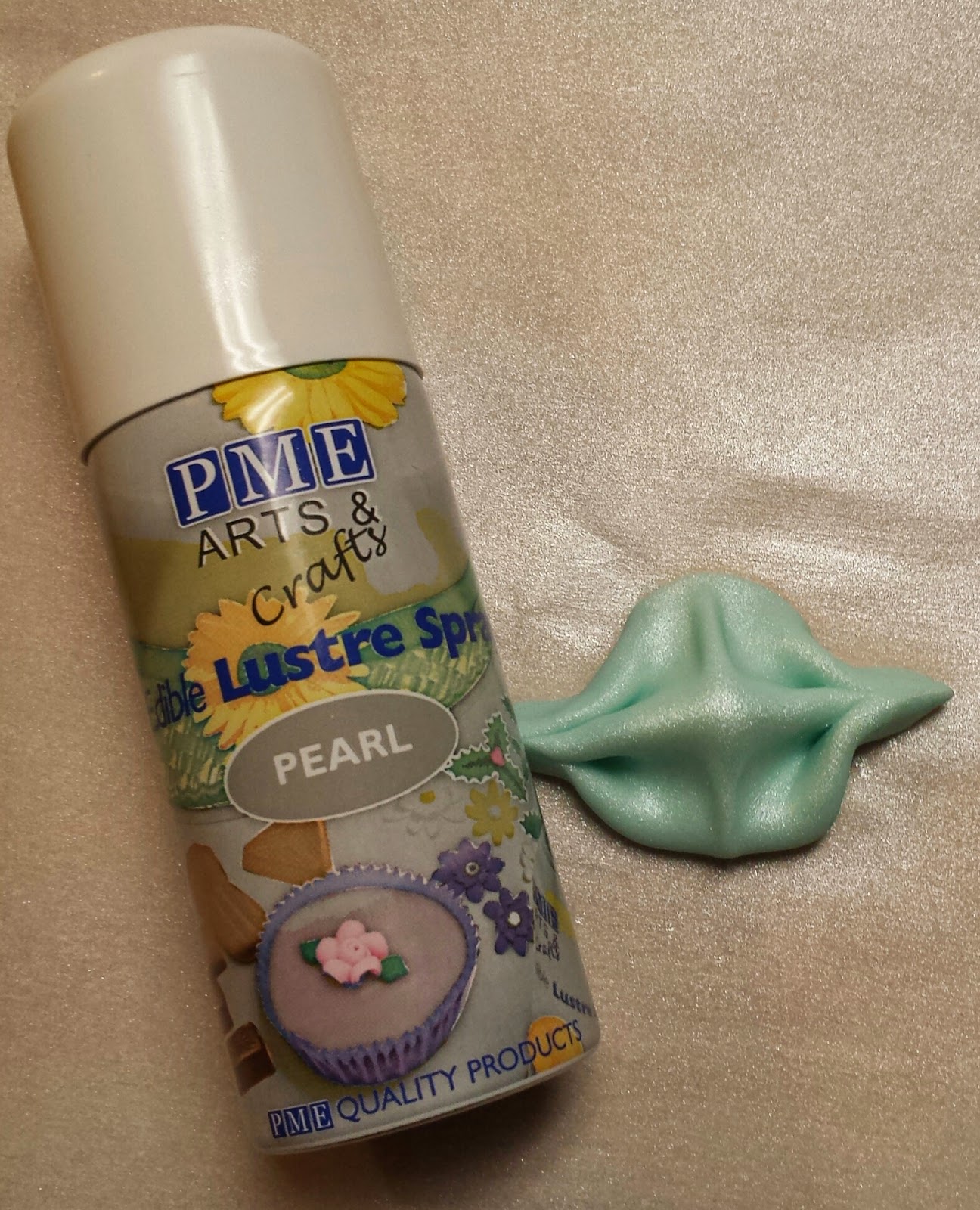 I added a fondant rose and pearls to complete my mom's cake, and this was the finished product: 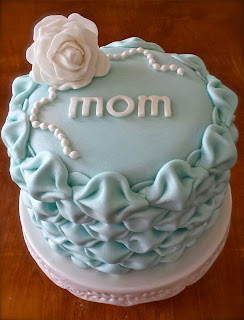