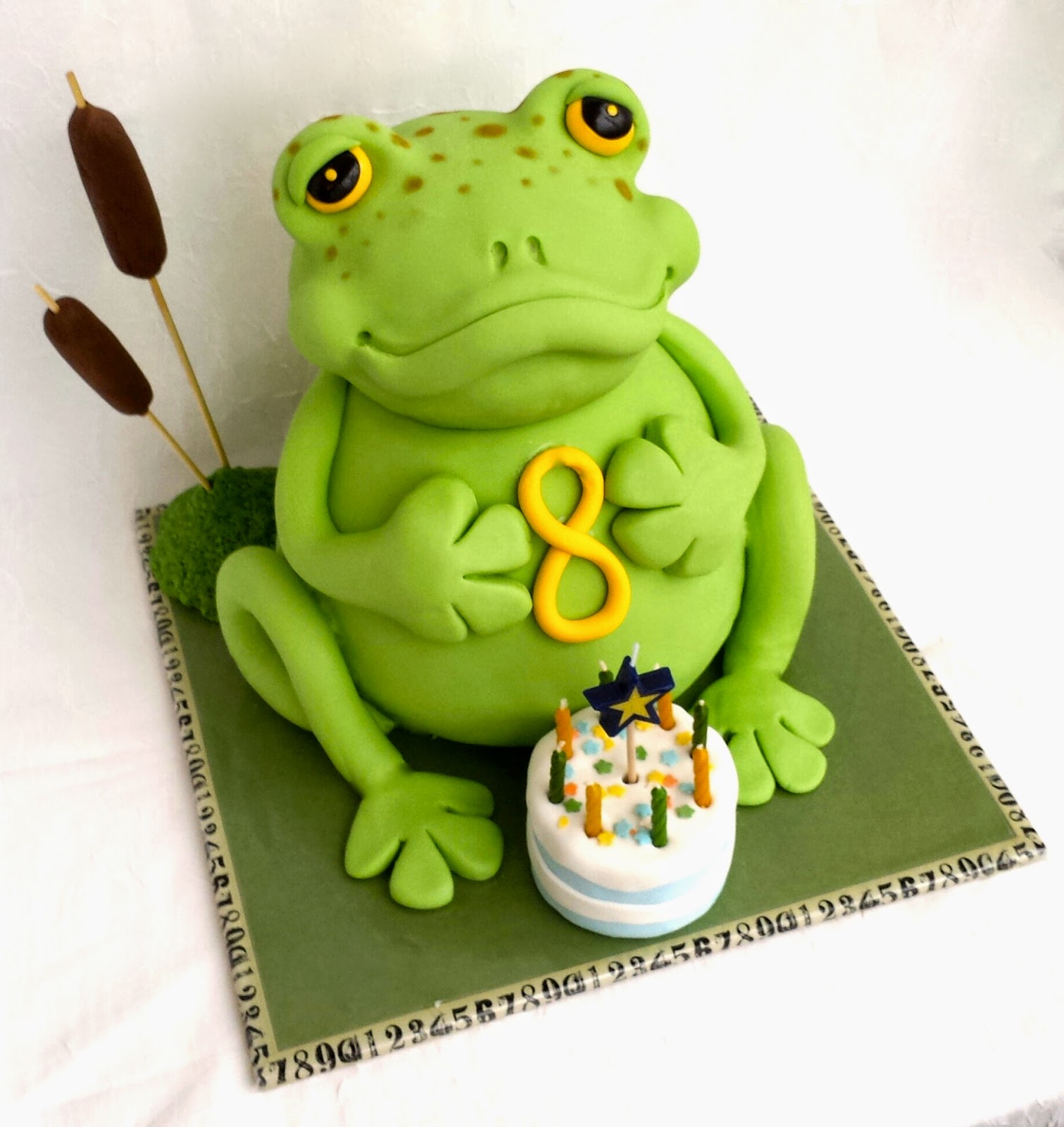 My nephew, Daniel, has requested a frog cake for his birthday every year for the past three years.  This year, he saw a picture online (https://www.flickr.com/photos/lolopie/2436766839/in/faves-westsussexcupcakecompany/) and wanted me to replicate it.  I don't have much time for blogging right now, so here is the abridged version of the process... 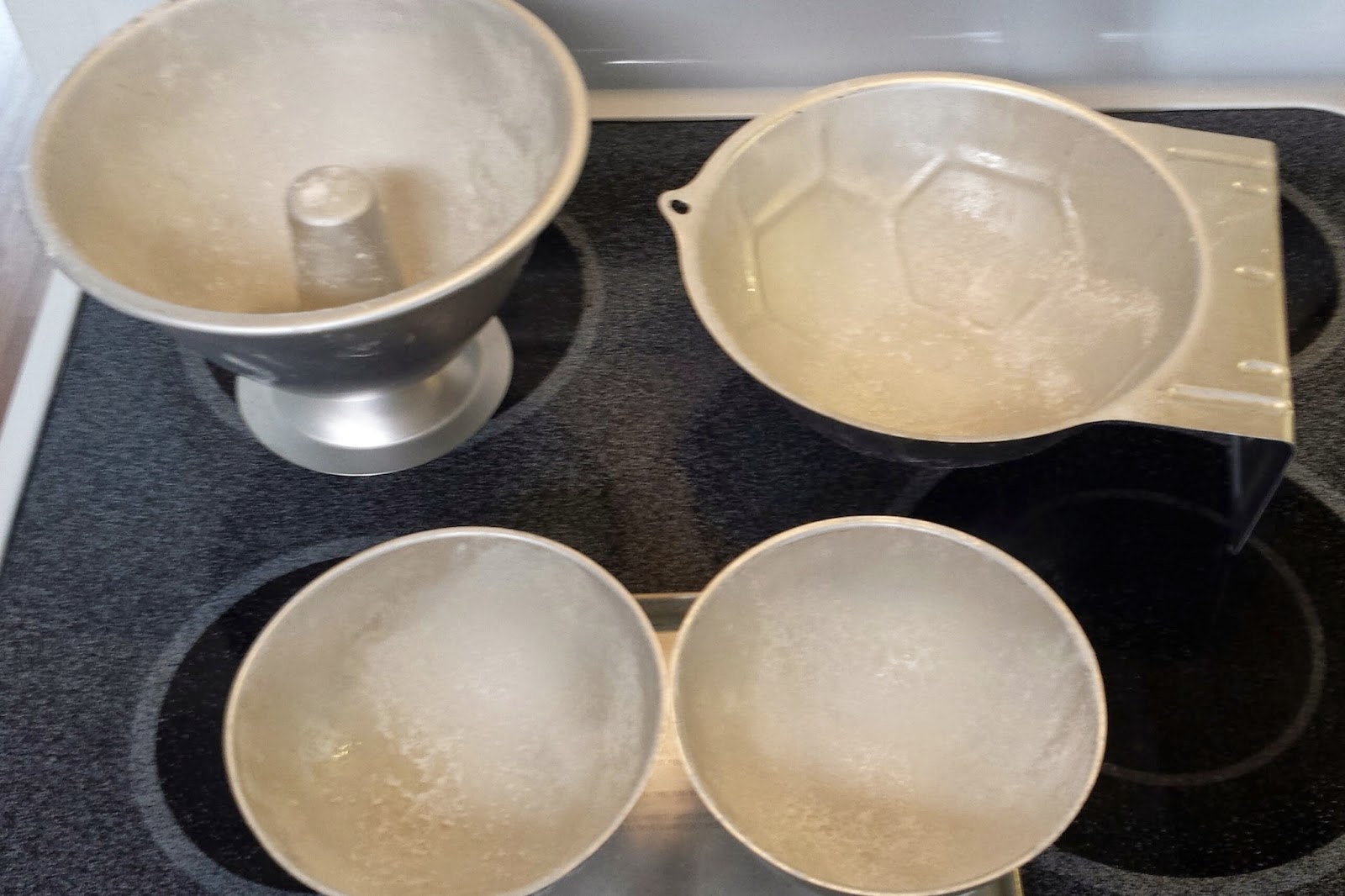 I used four cake mixes, two cans of frosting, half of a large box of Wilton Decorator Preferred Fondant, and the pans pictured below to make the cake.  These are all Wilton pans (Doll Pan, Soccer Ball Pan, and Sports Ball Pan Set), but round, oven-safe bowls would probably work equally as well.  The only alteration that I made to the cake mixes, is I reduced the amount of oil per mix to just 1 tablespoon, to make the cake more firm/dense so that it would hold its shape.

When the cake was baked/cooled, I layered it, as pictured below.  Layers (from bottom to top): soccer ball (edges trimmed to line up with base of next layer), doll (cut in half for an additional layer of filling), and both halves of the sports ball with part of the bottom half removed to give it a wider base and to make the head less round.  I filled each layer with green-tinted vanilla frosting.  (The cake is actually green as well, but it's hard to tell!) 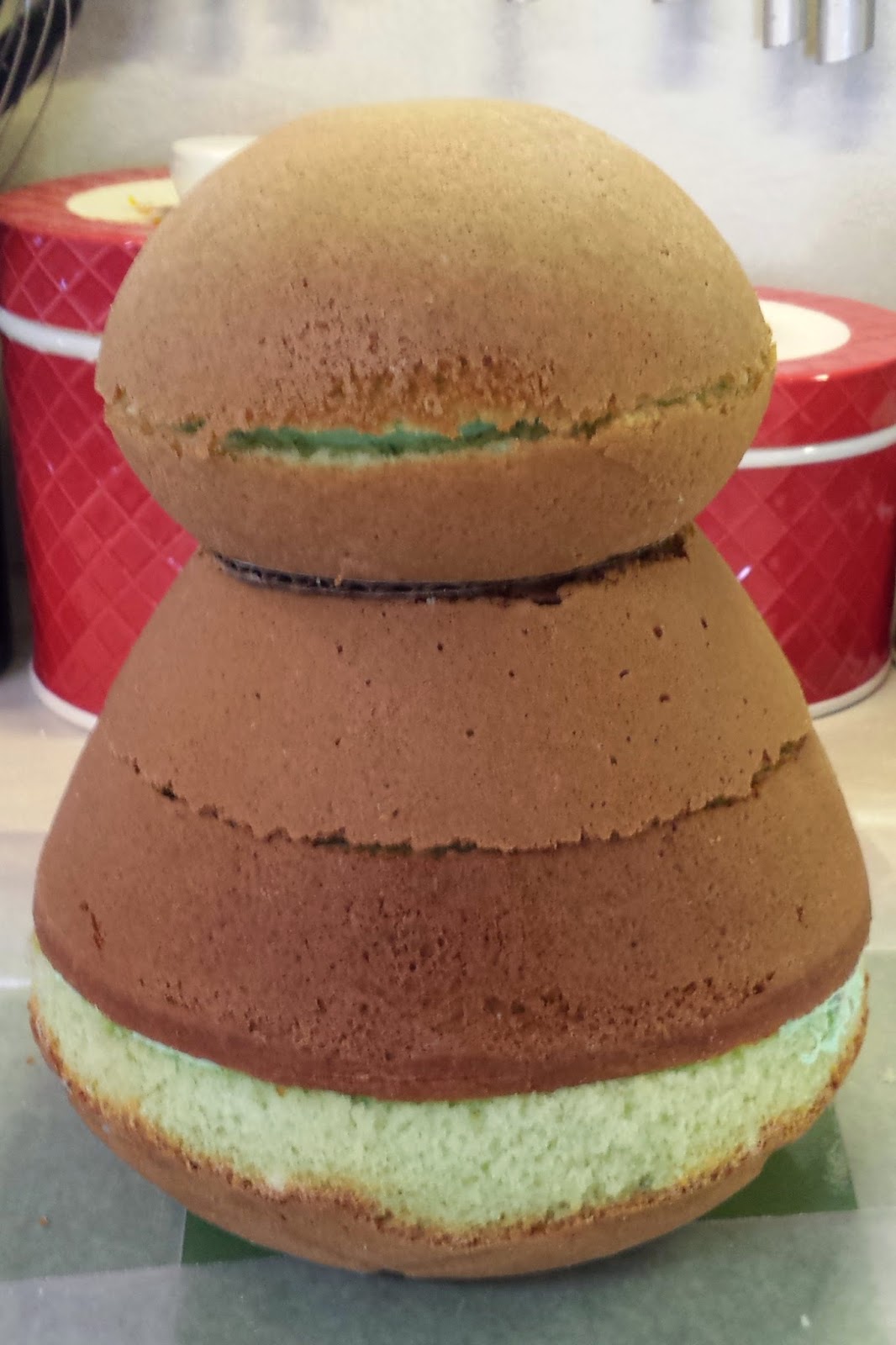 Next, I covered the whole cake with a thin layer of frosting. 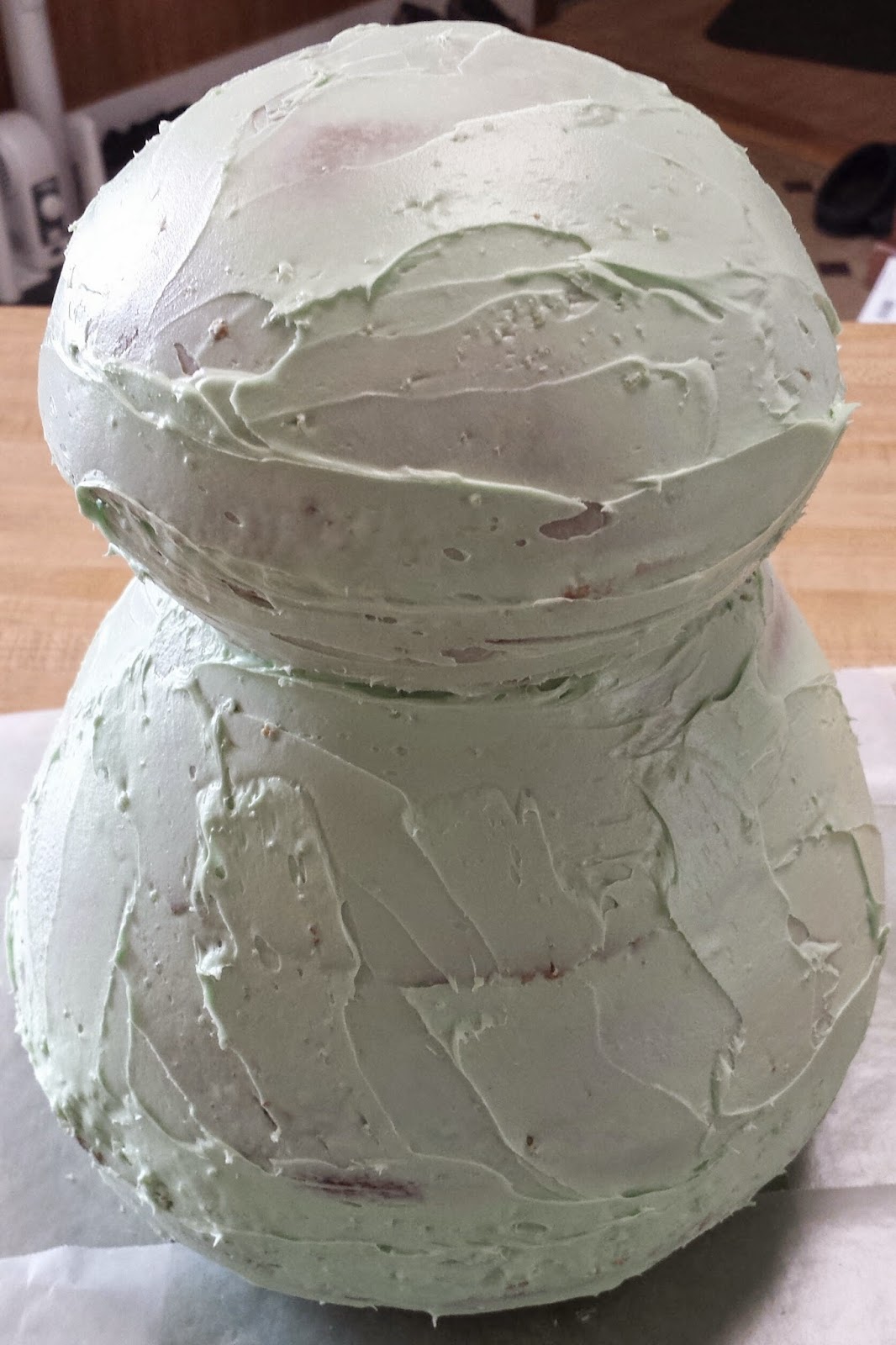 I made facial features out of some leftover gray fondant (mixed with a little bit of tylose powder to help them harden).  I would have liked the lips to have been a little bit bigger, but the frosting wouldn't hold them up if they were heavier. 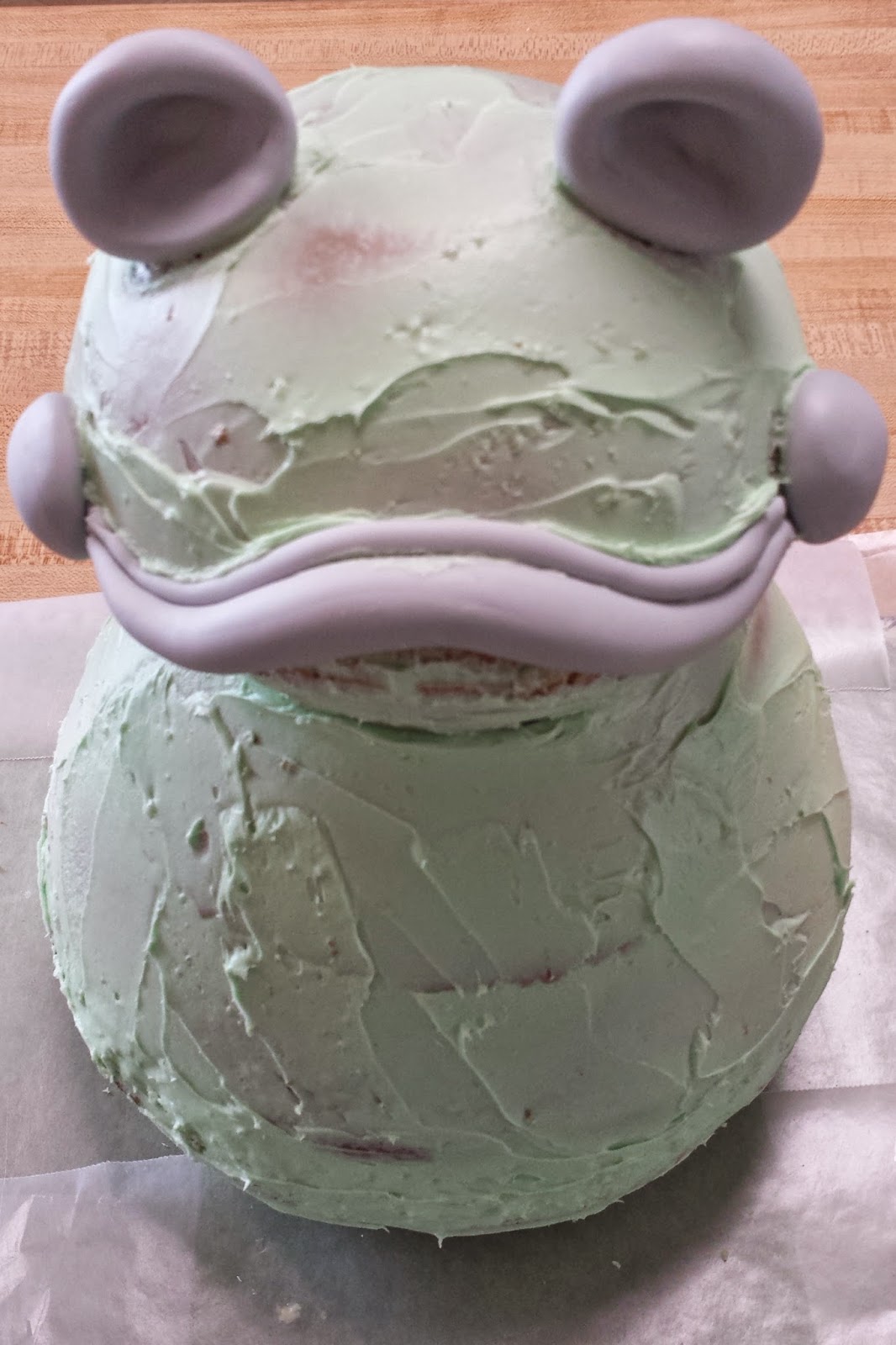 Next, I tinted my fondant with equal parts yellow and green, and I added a tiny amount of black.  I initially attempted to cover the entire frog with one big sheet of fondant, but it ended up tearing, wrinkling, and squishing the eye sockets, so I decided to 1.) let the eye sockets dry/harden for a little while and 2.) remove the head and cover the body and head separately, and then replace the head.  I ended up using straws in the frog's body to help support the weight of the head.

I used the curved, pointy fondant tool to make the crease for the mouth, and I used my small ball tool to make the indents for the nostrils and at the corners of the mouth. For the arms and legs, I rolled out long "sausages" of fondant and attached them with piping gel. The hands and feet were flattened balls of fondant with three cuts made in each for the fingers/toes, which I rounded/shaped. The dots were made with brown petal dust... of course, I didn't have brown, so I mixed red with light green.  The eyes were balls of yellow fondant with a circle of black and a small dot of yellow in the middle.  I rolled small pieces of fondant to drape over each eye. 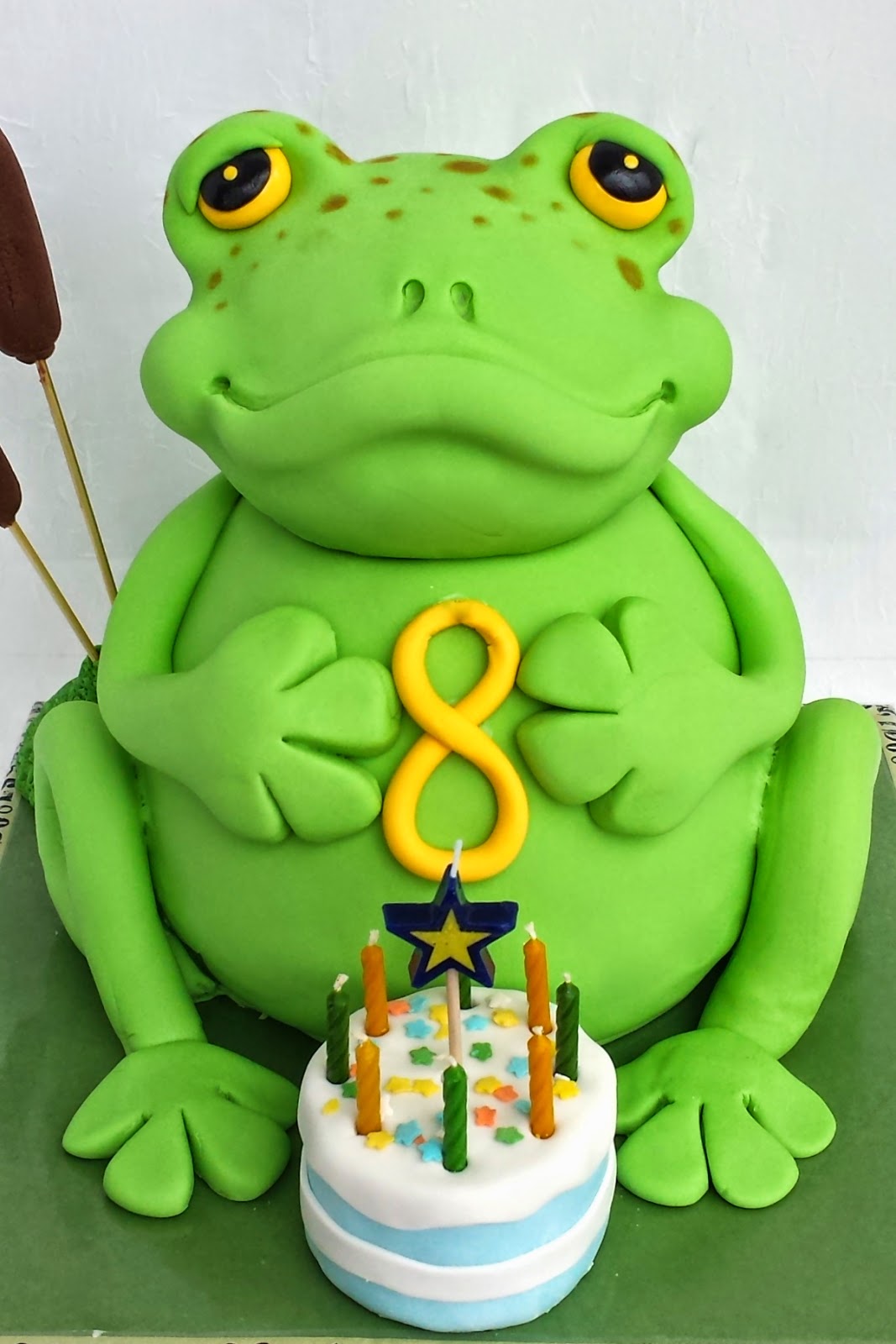 Since I had some extra space in the front of my cake board, I made a little mini cake out of Rice Krispie Treats (which actually ended up being my nephew's favorite part). 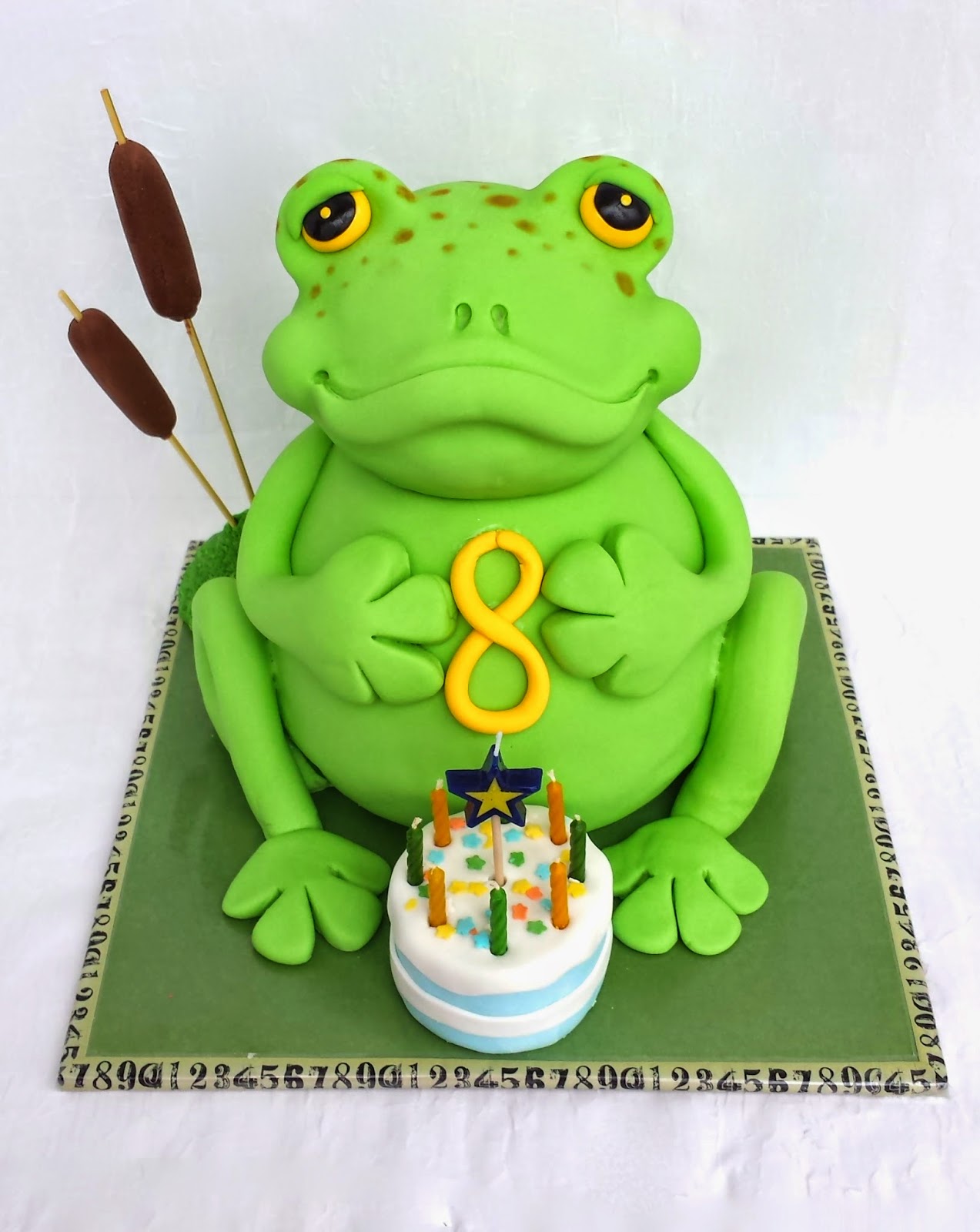 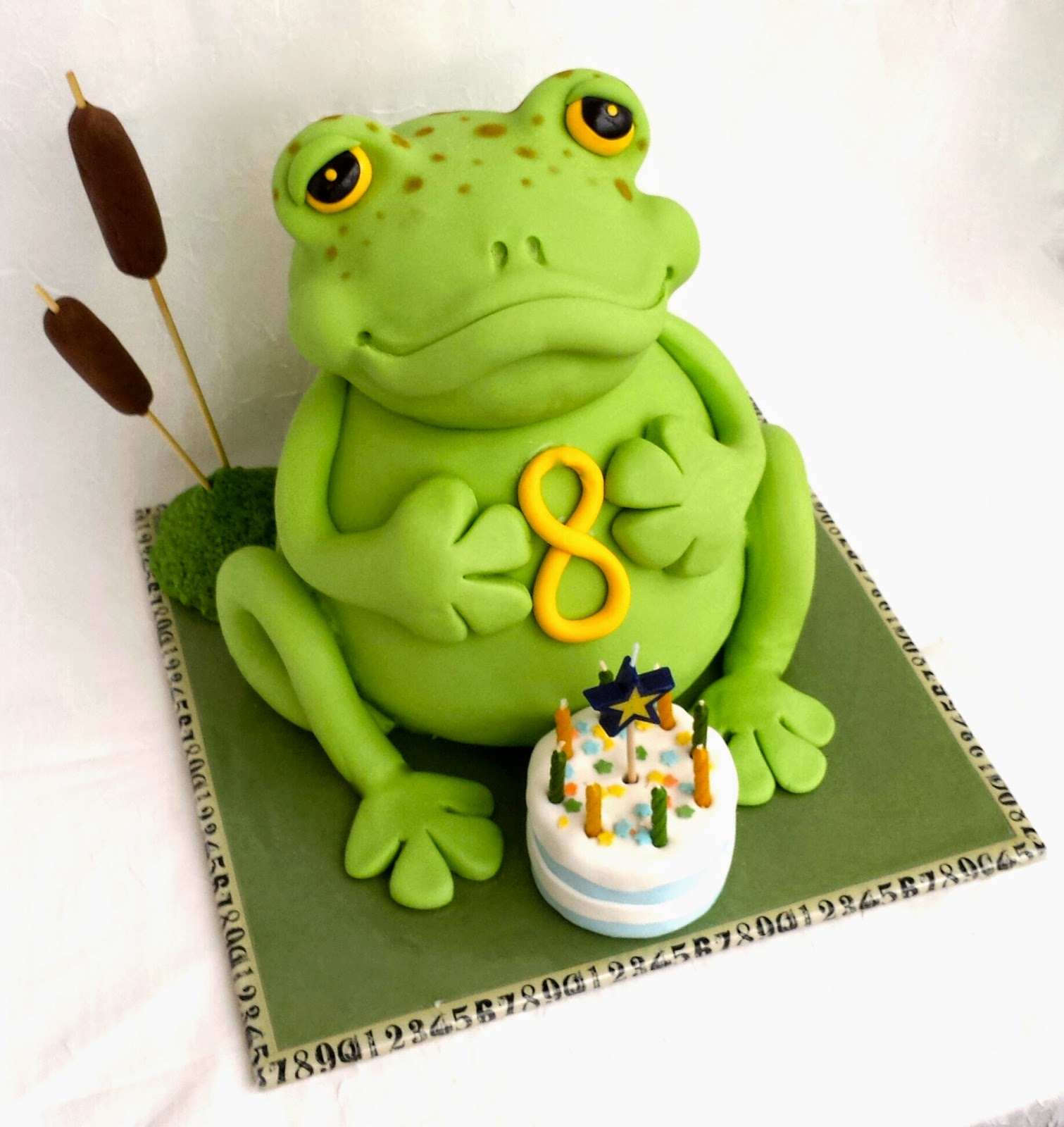