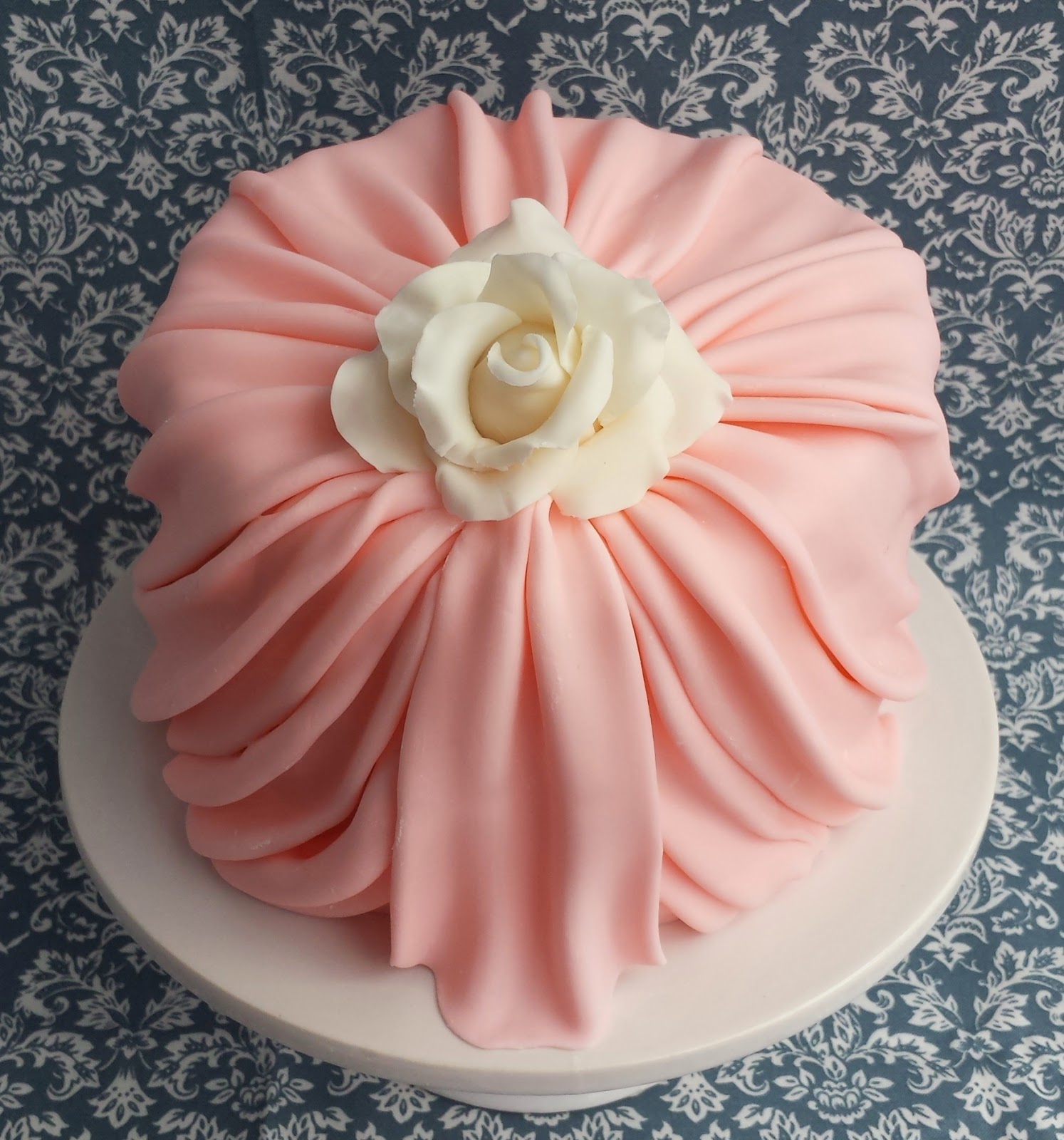 I wanted to make a cake to celebrate my aunts coming up to visit from Pennsylvania.  When I asked my mom what she thought I should make for them, all she said was that she thought they would like something with a flower... so this is what I came up with.

To start, I baked, leveled, filled, and frosted a six-inch cake.  Then I covered it with a layer of Satin Ice vanilla fondant that I had tinted pink (with a little bit of golden yellow food coloring added in).  Then I attached the pleated sections with piping gel.

To make each pleated section, I rolled out a long, thin strip of fondant, folded the rough edges under, and then laid it over a dowel to make the center pleat.  Then I pinched both of the ends and attached the strip to the cake.

I chose a spot in the top/front to be my central point, which is where I connected the top of each strip.  I started in the front and worked my way around to the back, alternating from one side to the other as I added the pleated strips. 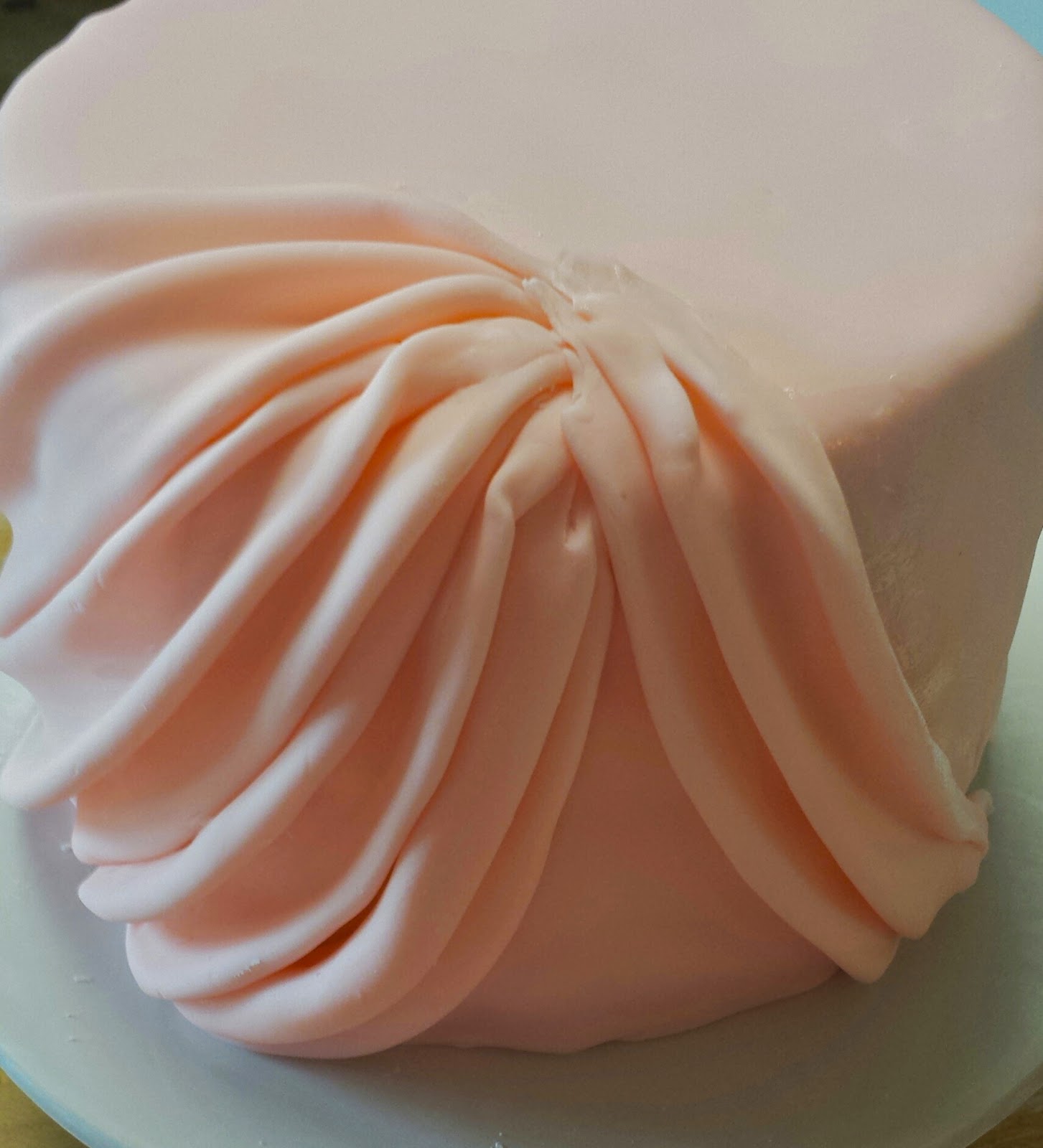 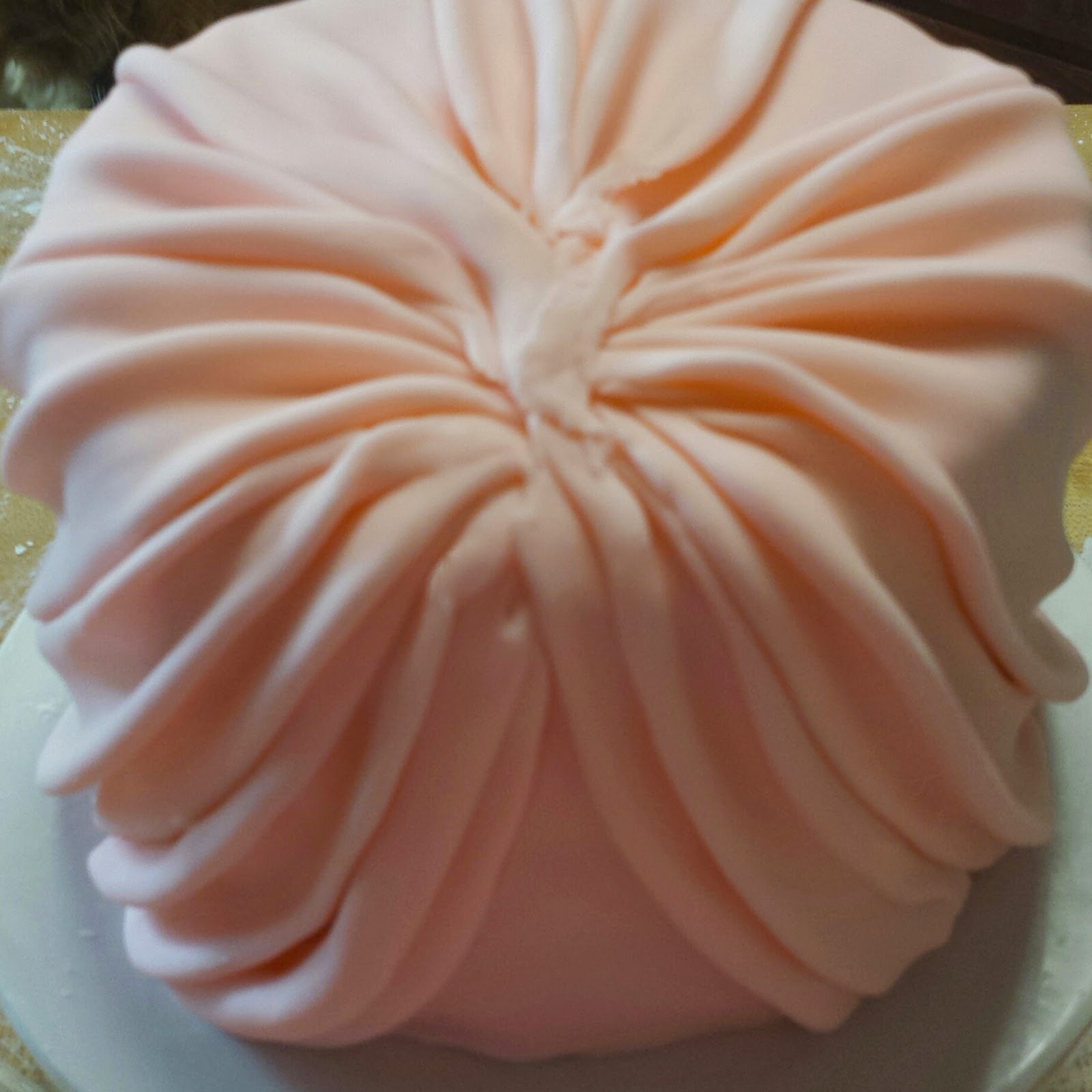 As you can see, I wasn't very careful joining the strips in the center because I knew that I would be covering this part with a flower later on.

I chose a point in the back on the bottom to be my second meeting point for the pleated strips.  In hindsight, I might have put a bow or something over this section. 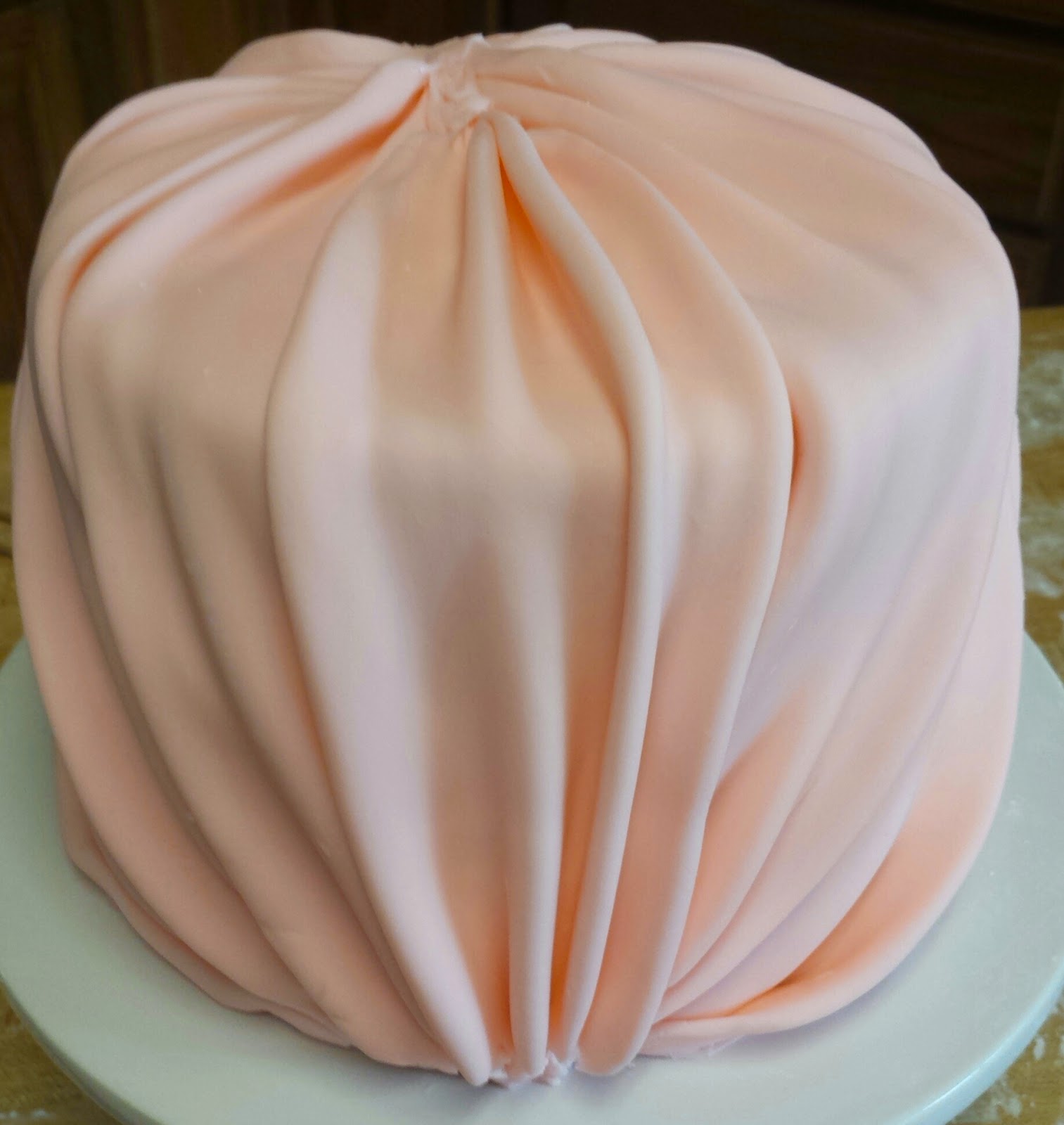 After I had added pleats around the whole cake, I decided to drape a piece of fondant from the spot where the pleated strips met.  I rounded the bottom edge of the strip and let it hang freely, without pinching the bottom edge or tucking it under. 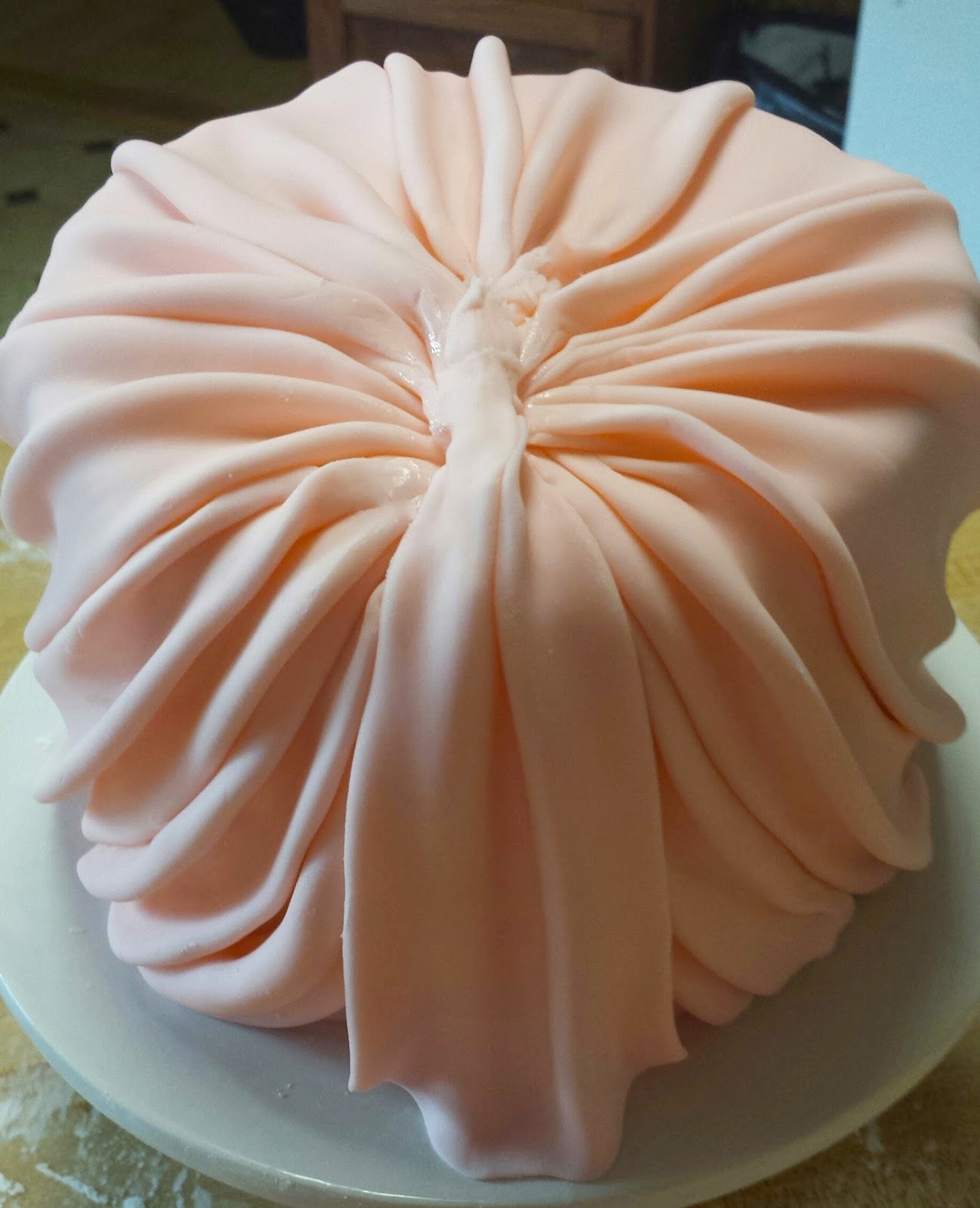 Lastly, I added the rose.  I didn't take any photos of this step because I sort of rushed through it, but making fondant/gumpaste flowers is not really my forte anyway. :-)

Here is the finished cake: 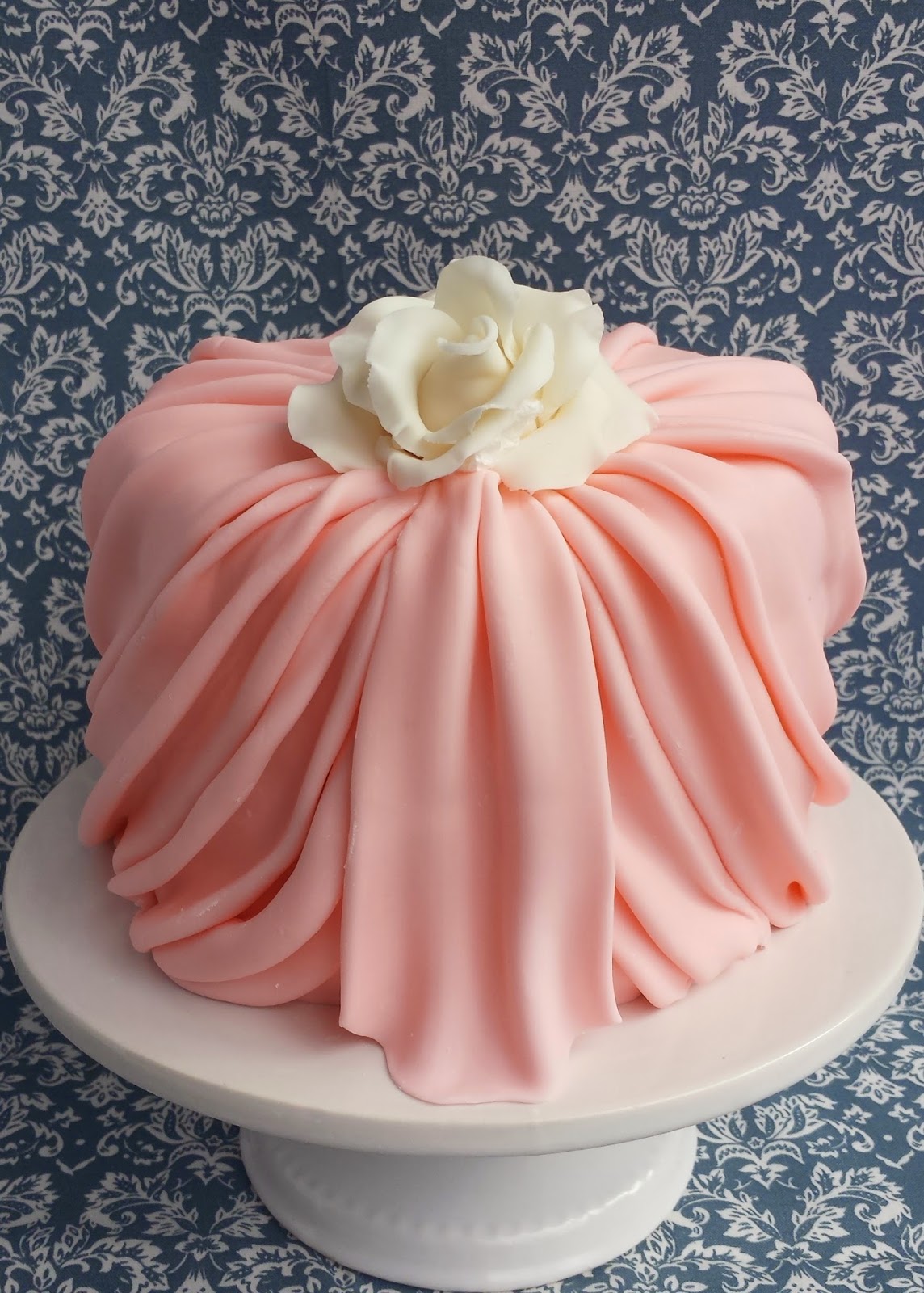 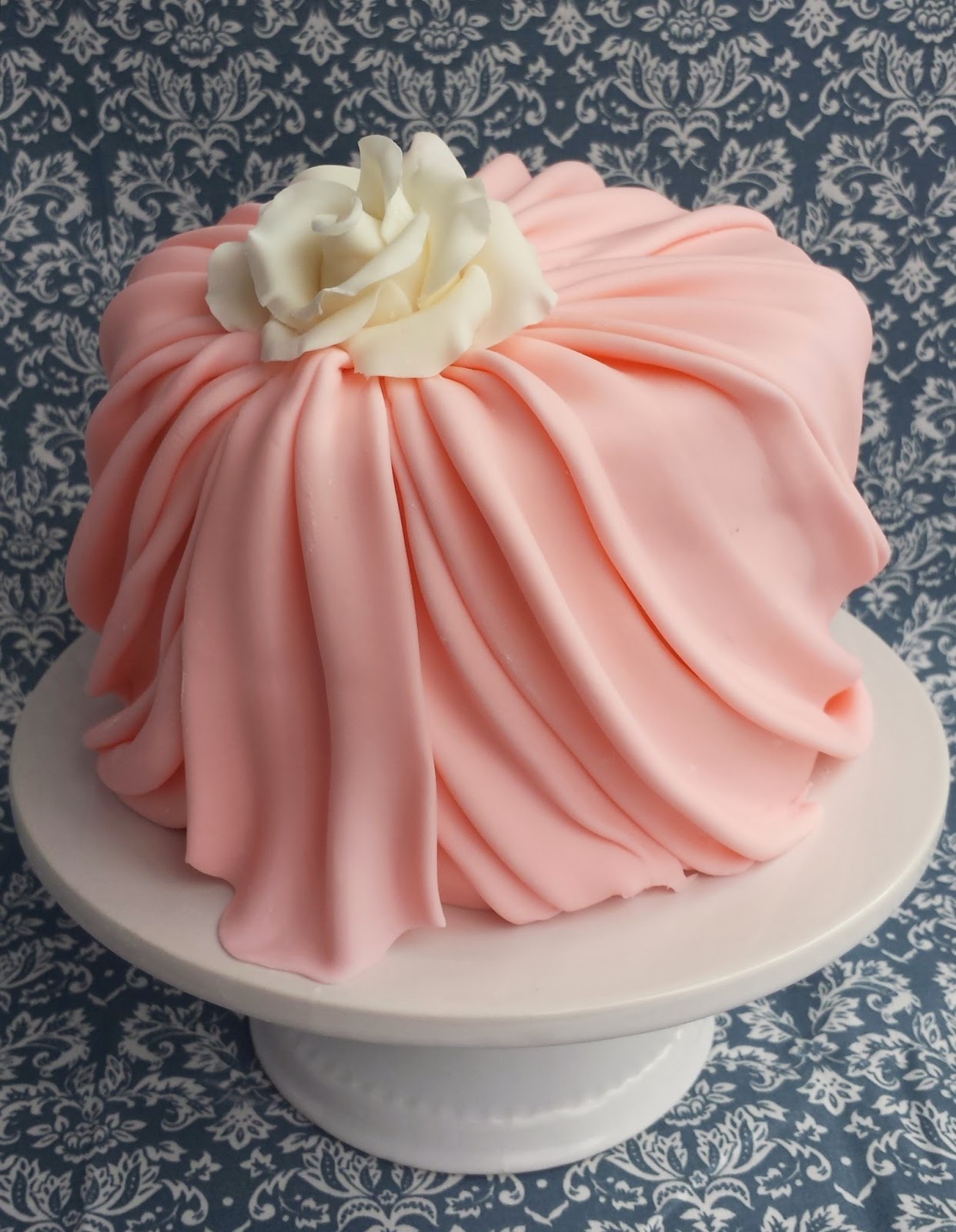 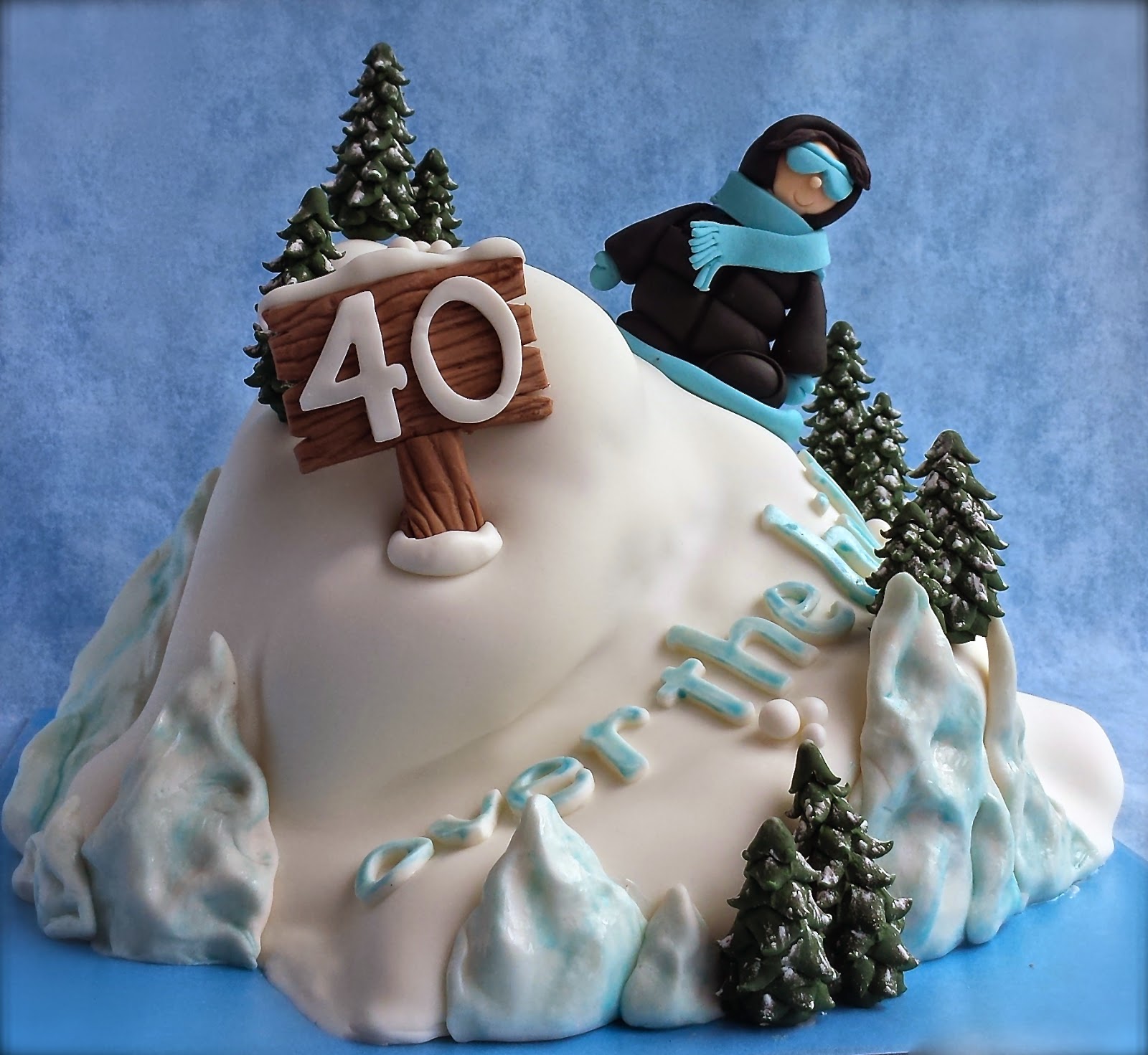 My cousin asked me to create a snowboarding-themed over-the-hill cake for her sister who turned 40 in August.  While it seemed like a strange time of year to be thinking about snow, I was excited for the challenge and looked forward to something different from the typical girly cakes that I normally make.  I made this cake using an eight-inch round cake pan and the Wilton doll cake pan, although pretty much any pans would work. 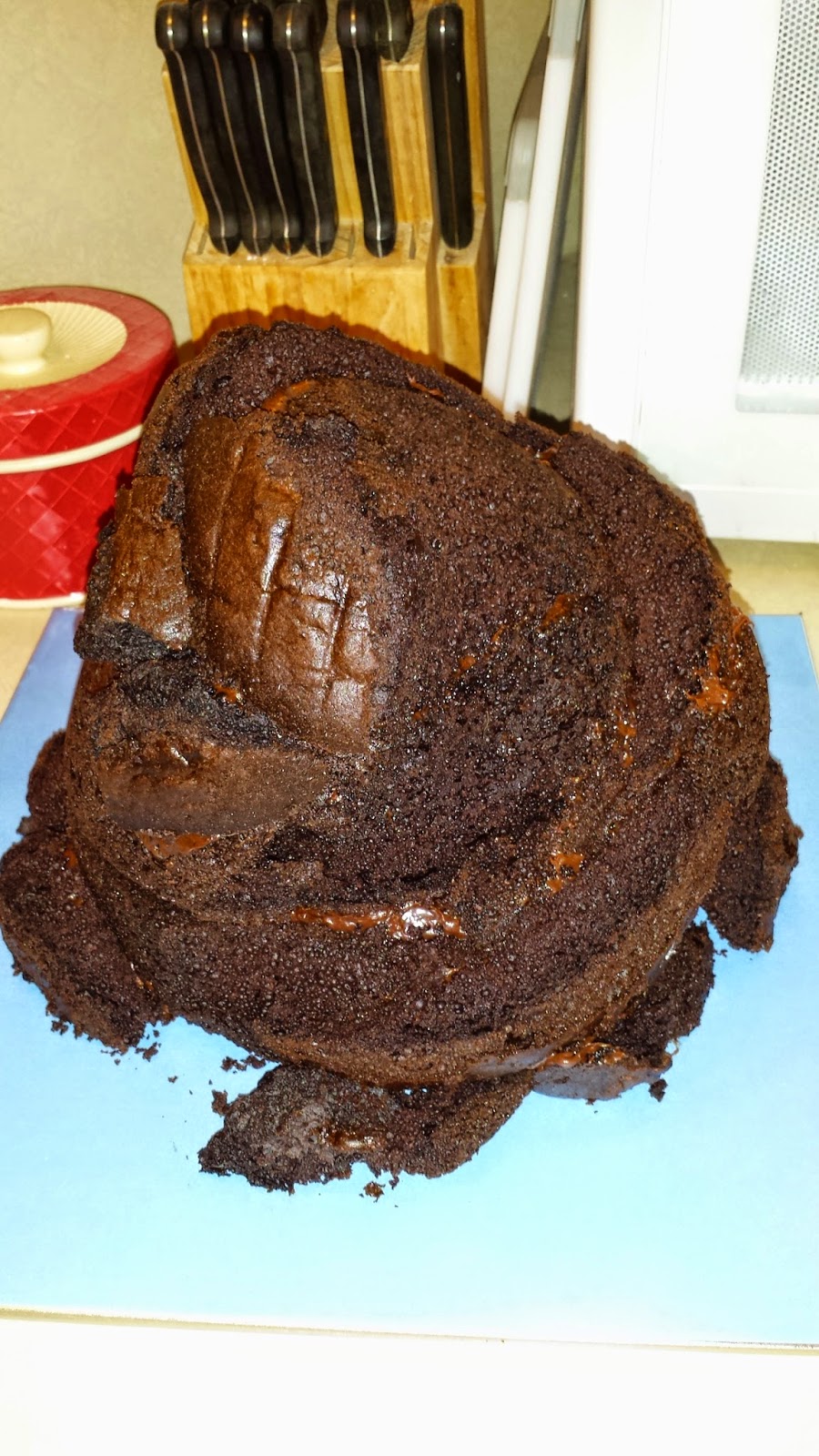 Once the layers were finished baking, leveled them (setting the scraps aside for later).  I put the eight-inch tier on the bottom, covered it with chocolate frosting, and stacked the doll-shaped tier on top.  Then I cut the doll tier in half and added another layer of frosting before placing the top half back onto the cake.  Next, I started hacking away!  I started by cutting the top of the cake at a slant.  I took the piece that I cut and added it to the higher side to make it higher and wider on that side.  Then I cut away a curved section to make the slope.  I used all of the pieces that I cut away to make lumps and bumps in various places all over the mountain, attaching them with frosting.  By the time I had finished, the cake literally looked like a pile of crap.  Every time I make a cake, there is always a moment of panic when I wonder how it will ever work out; this was it.

Next, I covered the cake with frosting and used a few strips of fondant to accentuate the edge of the slope. 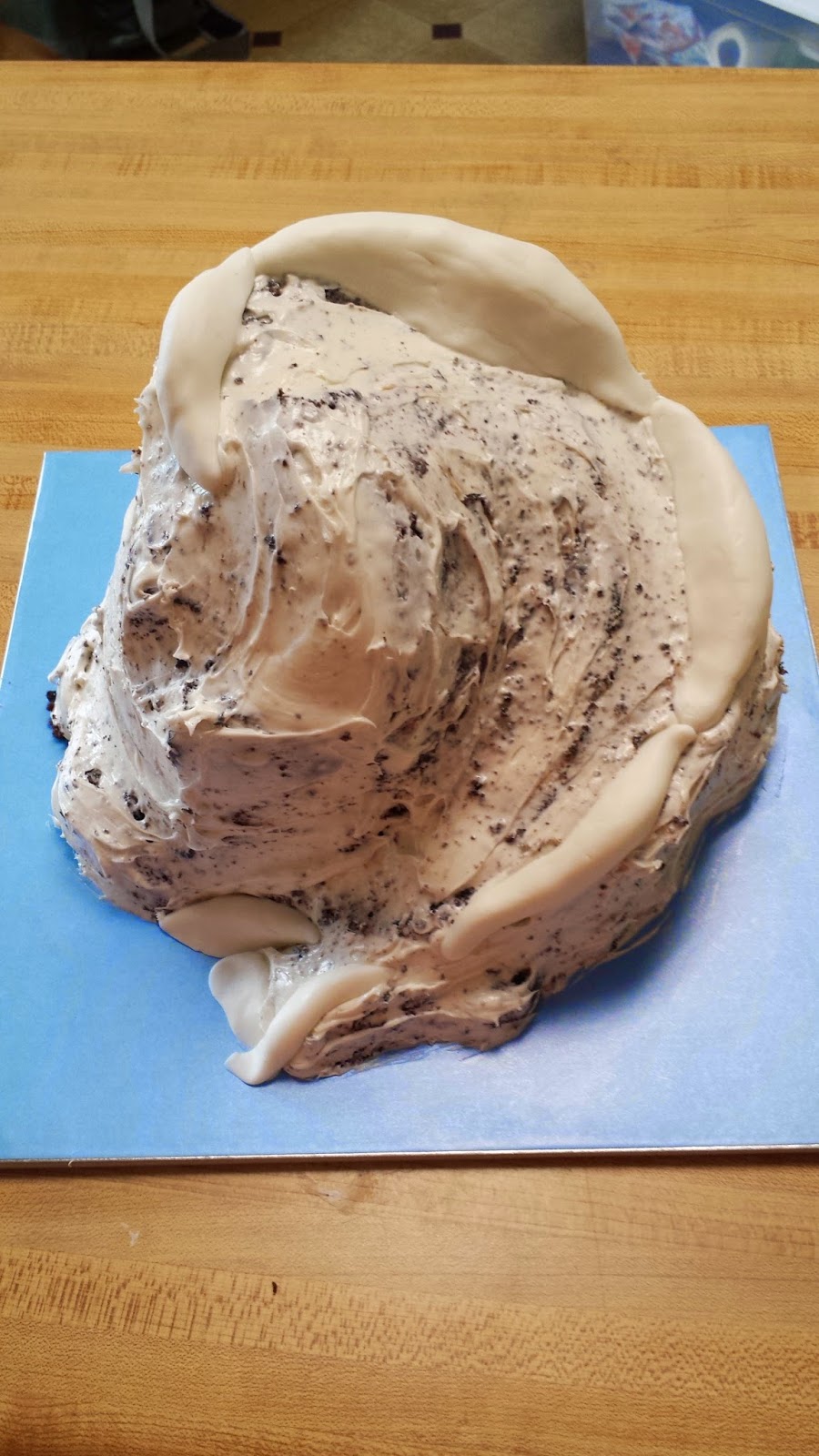 Then I covered the cake with white fondant, carefully pressing it into all of the crevices. I didn't worry too much about the raw edges around the base, since I was planning to cover them with ice, snow, and trees. 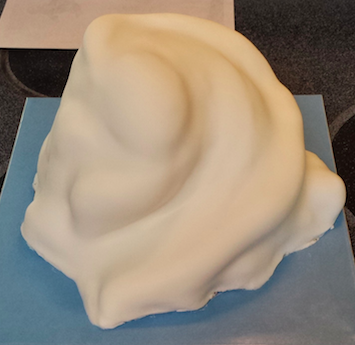 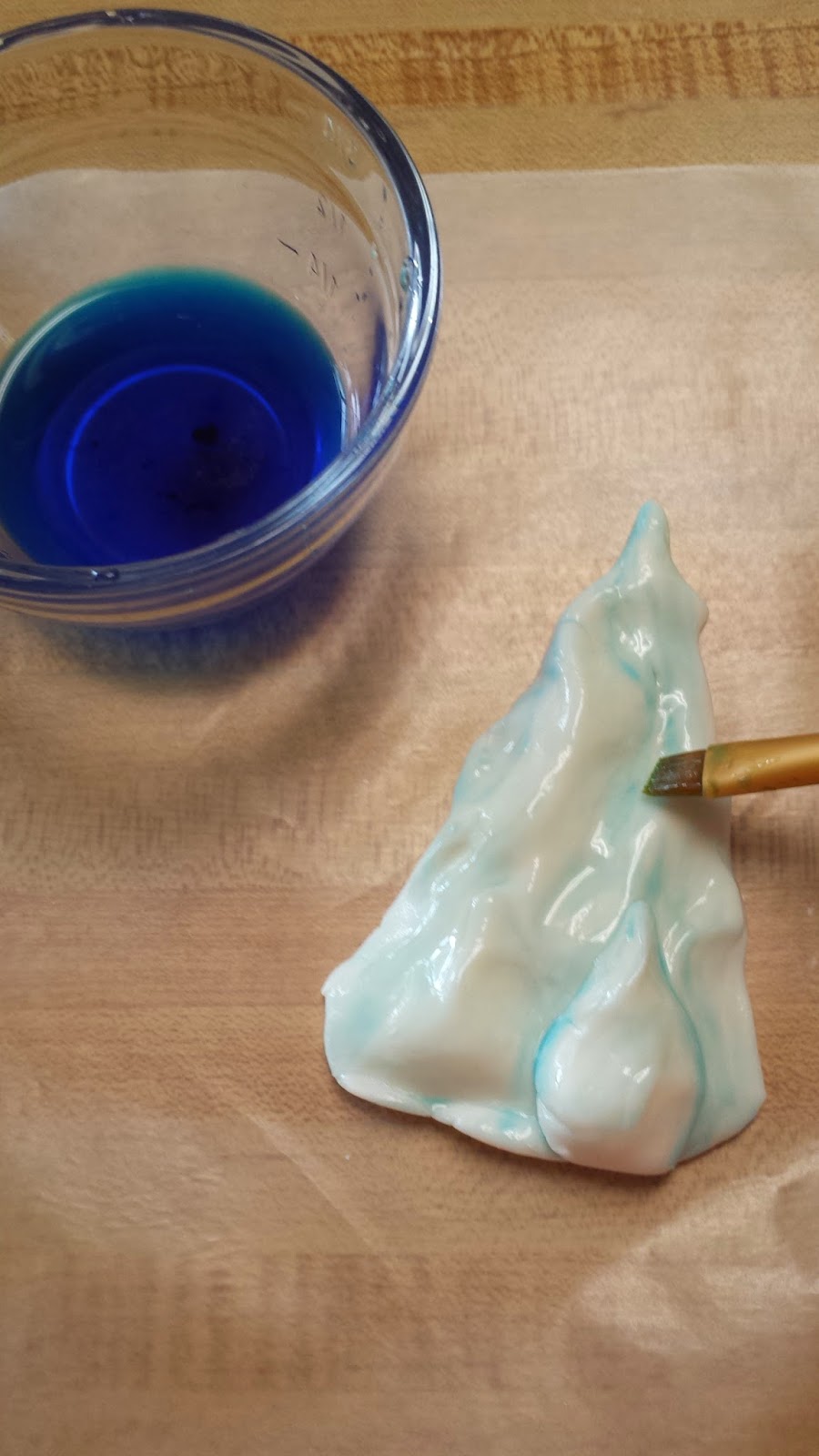 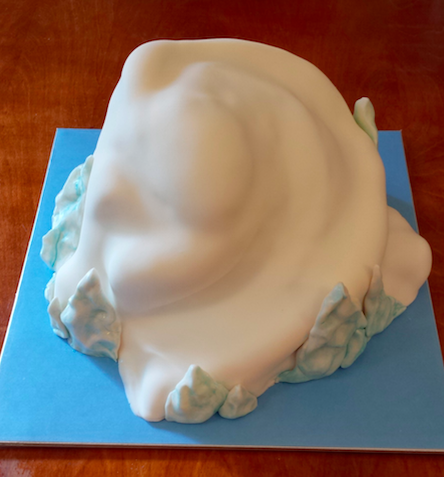 To make the trees, I rolled a piece of fondant into a cone shape, poked a bamboo skewer up through the bottom, and made several cuts in the fondant with a small pair of scissors. 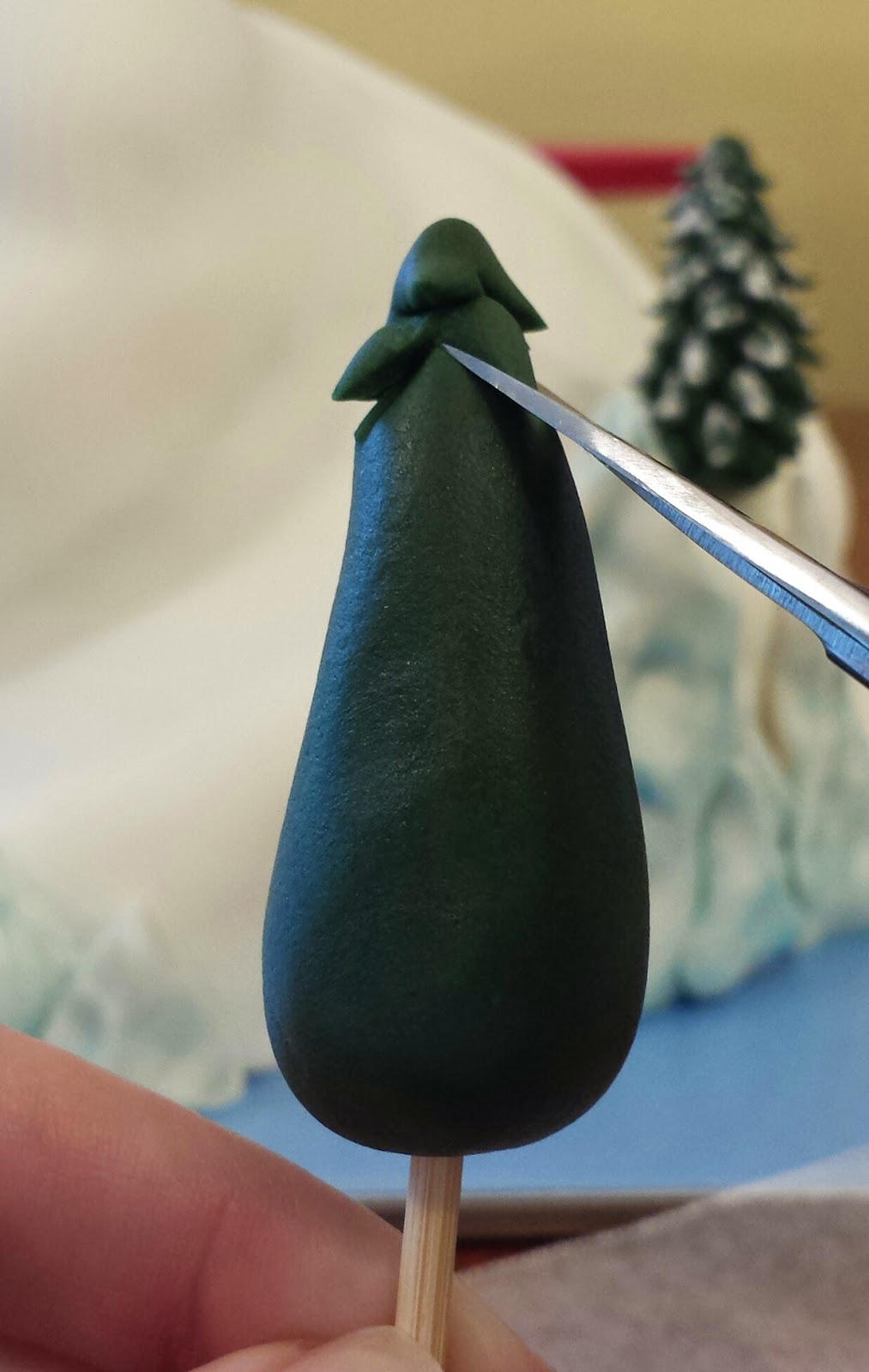 Once all of the cuts had been made, I curled the ends of each bough upward with my thumb. 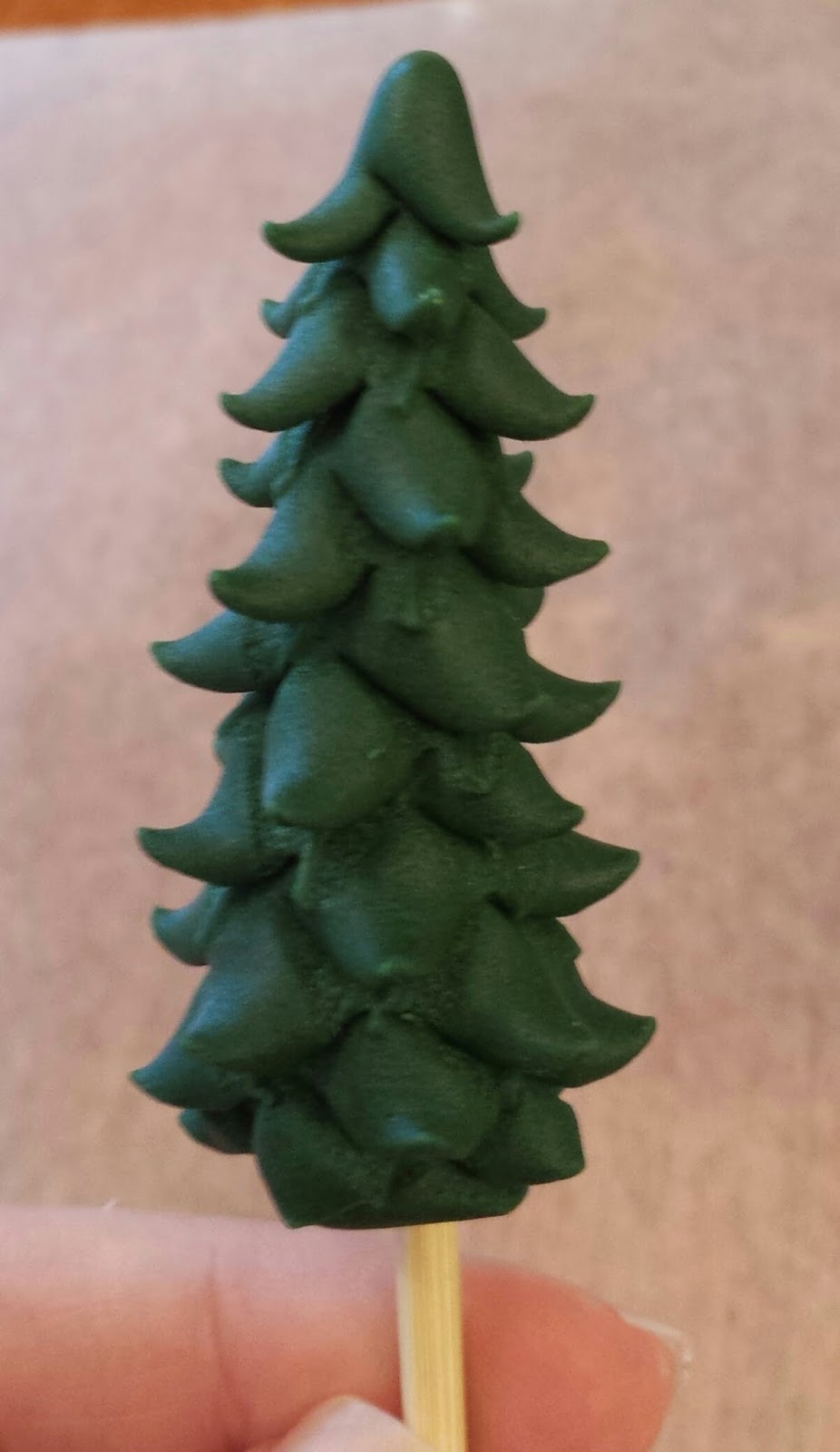 Then (the best part!) I sprinkled each tree with powdered sugar and added them to the cake in various places to fill the gaps. 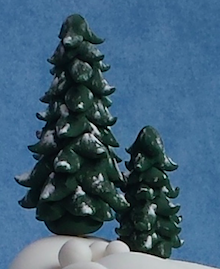 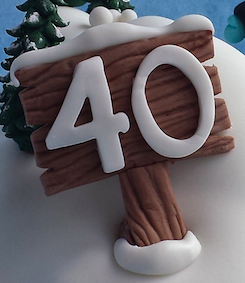 To make the sign, I rolled out some marbled brown fondant and pressed it onto my wood grain impression mat (although scoring it with a knife would have worked equally as well).  Then I cut some small notches in the sides.  I placed a skewer on the back of the sign (with about three inches sticking out from the bottom to attach it to the cake later) and stuck a thin layer of fondant over it to keep it in place.  Then I added the numbers (from the Wilton letter mold) and laid it flat to dry overnight.  The next day, I stuck it onto the cake and rolled a strip of white fondant for the snow on the top of the sign and just below the sign.  I pressed it down in a couple of places to make it look more like drifting snow.


The next part that I made was the snowboarder.  I started by rolling out a little piece of blue fondant and cutting it into a rectangle, rounding the corners, to make the snowboard.  I put the snowboard on a piece of styrofoam and curved the edges of the snowboard up, then put pieces of skewers under both sides.  Next, I made two small balls of black fondant to press onto the snowboard for boots, and put a skewer down through one of the boots.  I added small strips of fondant on top of the boots to look like straps. 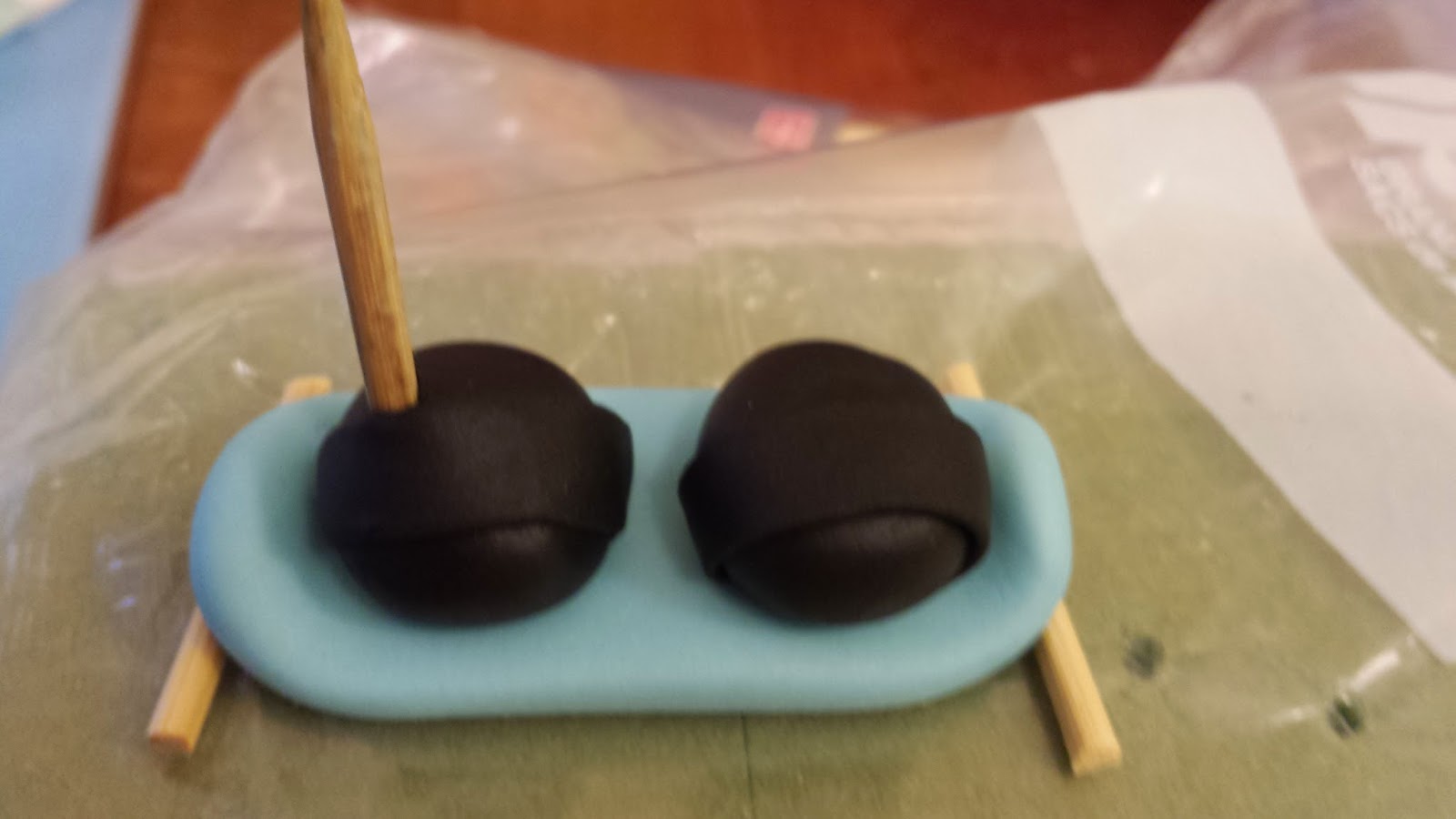 For the body, I took three different sizes of black fondant, rolled them into balls, and then flattened them slightly.  I stacked them on top of each other (to make a cartoonized down jacket) and cut a slit in the front.  Then I stuck the jacket down onto the skewer on top of the feet.  These were the sizes of the balls that I used for the jacket: 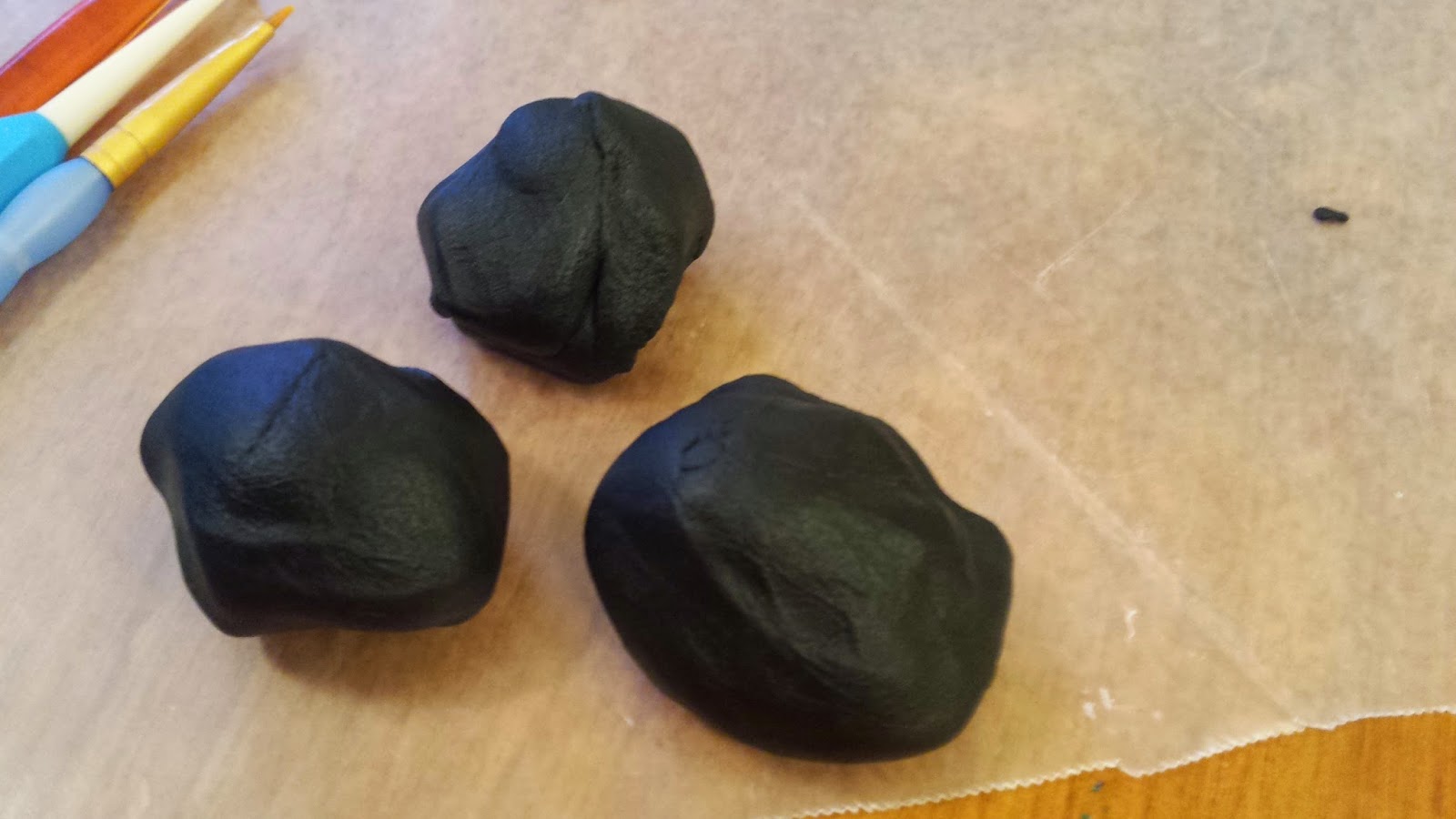 Next, I made the arms by rolling the fondant into cones.  I attached them to the jacket with some piping gel.  I also used slightly flattened balls of blue fondant for the mittens, making indentations near the thumbs, and then attaching them to the bottoms of the arms with a dab of piping gel. 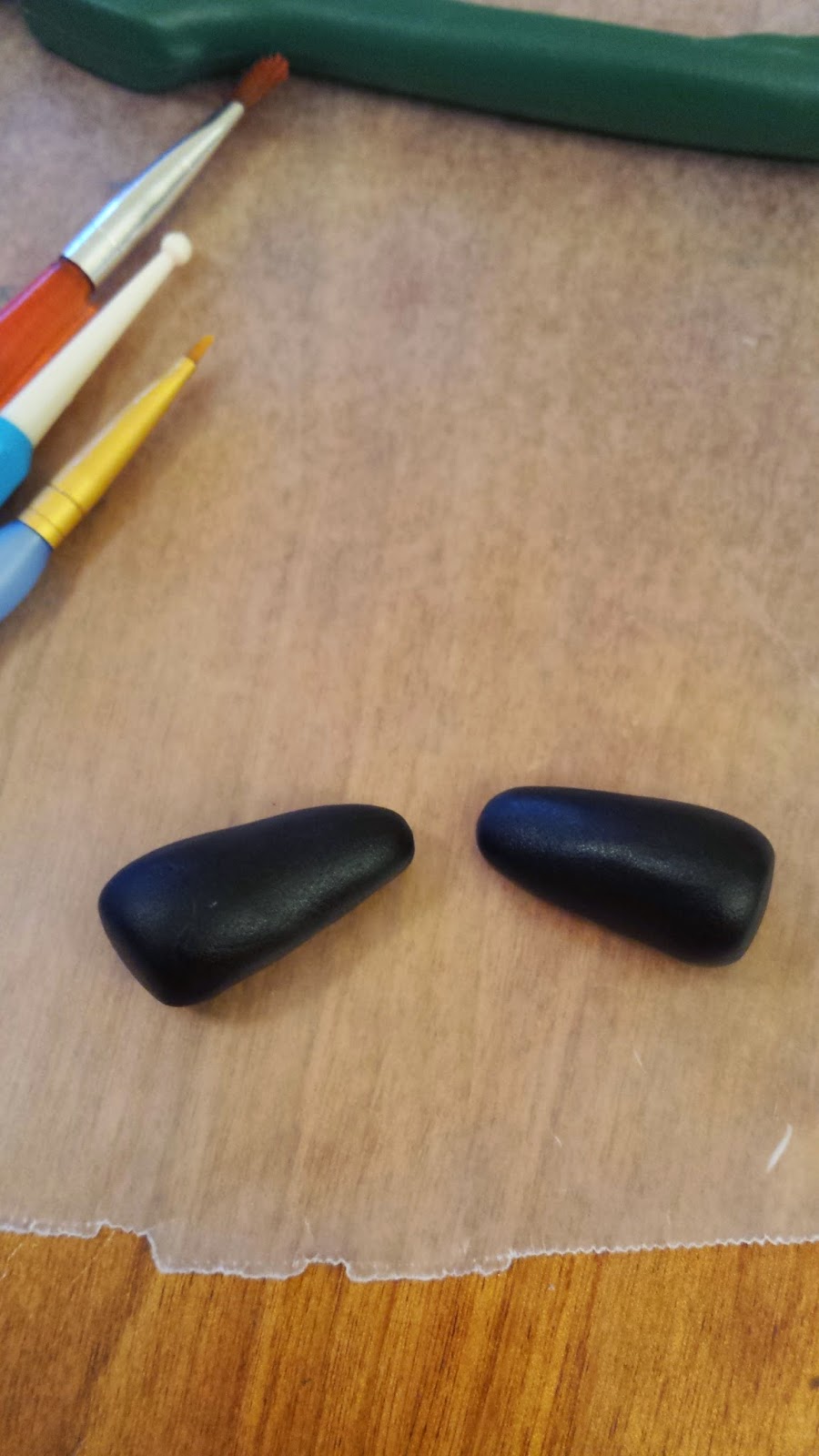 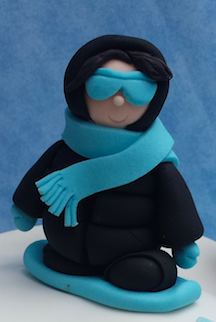 The next piece I added was the head.  I made a ball of peach-colored fondant and stuck it on top of the jacket, onto the skewer.  Then I rolled out a thin circle of black fondant and put it over the head to make a hat/hood.  For the glasses, I flattened two balls of blue fondant into circles, pressed them together in the center, and then cut the top.  Then I used the back of the knife to make a line across the top of the glasses.  I made the nose with a tiny ball of peach fondant, and I used a frosting tip to make a semicircular indentation for the mouth.  Since I wanted to make my snowboarder look a little bit more feminine, I used two small chunks of fondant to make bangs, and I added a scarf.  To make the scarf, I cut a long, thin strip of blue fondant and wrapped it around the snowboarder's neck.  I used my small scissors to cut the frays into the ends of the scarf.

After I added the snowboarder, I made the letters with the Wilton letter mold.  I chose to make them with white fondant and brush on some of the blue food coloring mixture that I used for the ice. I attached them to the slope with a little bit of piping gel. 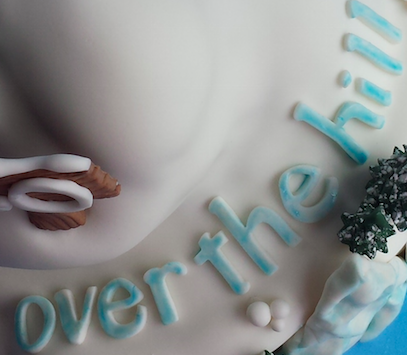 Lastly, I added some snowballs.  This wasn't part of my original design, but I had put a the sign in a place that I decided that I didn't want it (on the front of the slope), so there was a hole from the skewer that I needed to cover up... which is why I decided to add some snowballs. :-)  I ended up putting a few near the top of the slope, a couple in the middle, and three near the bottom/front, where the sign was originally located.  And that's it! 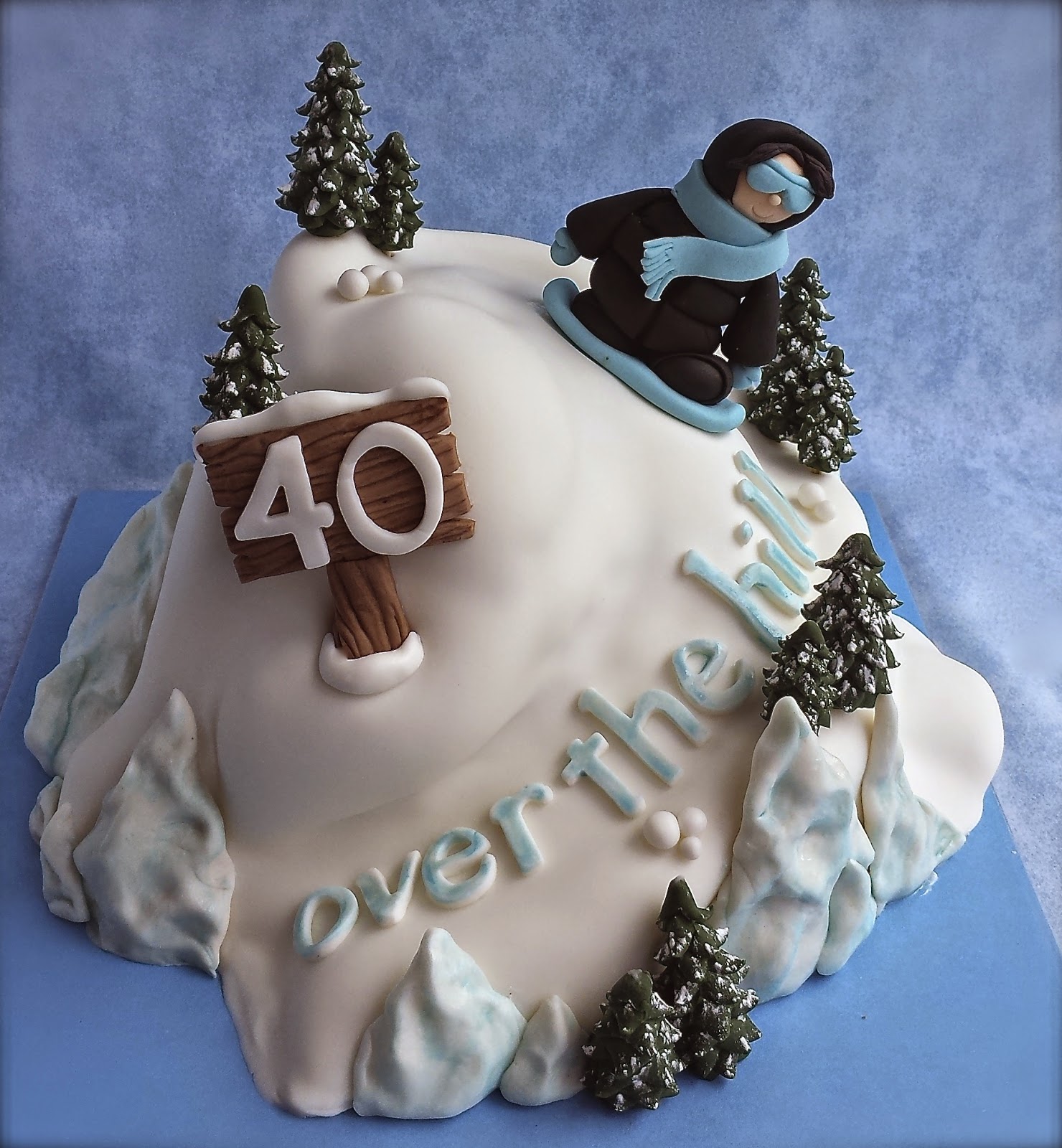 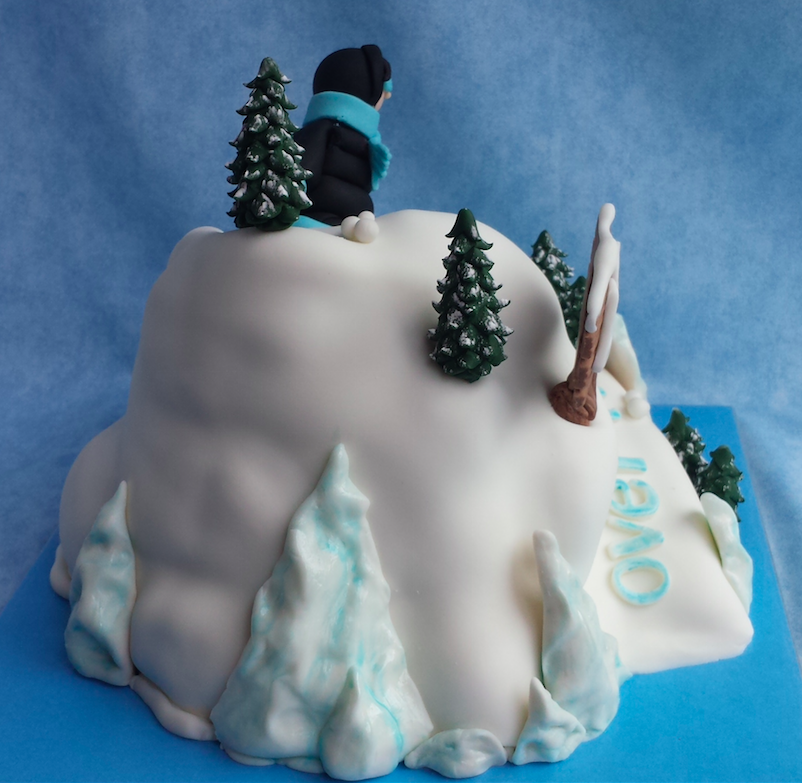 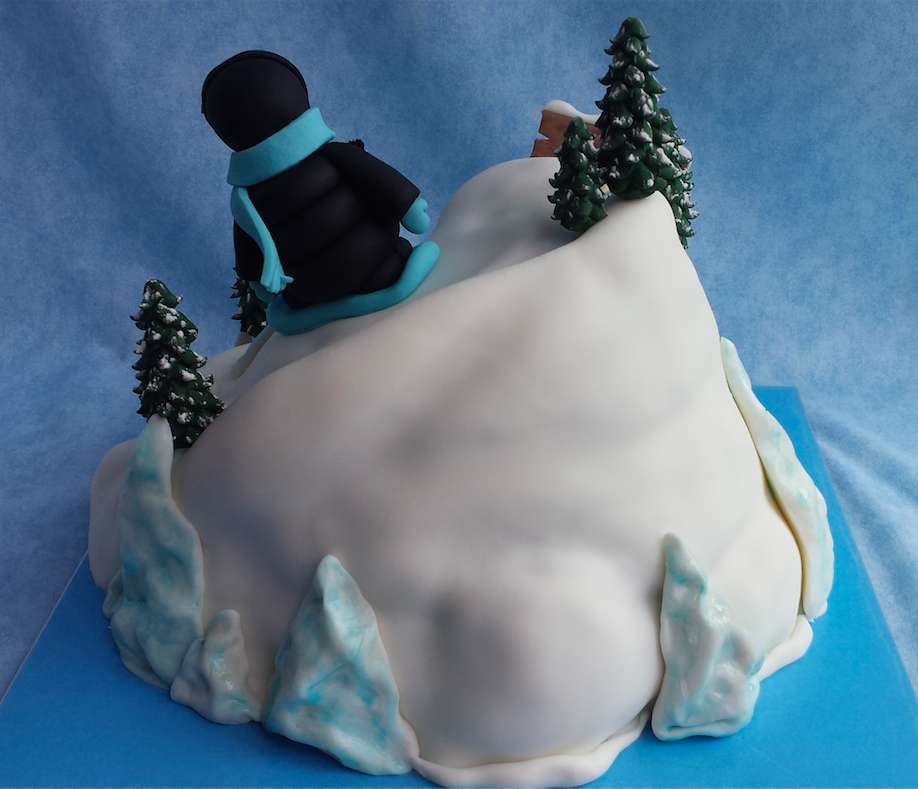 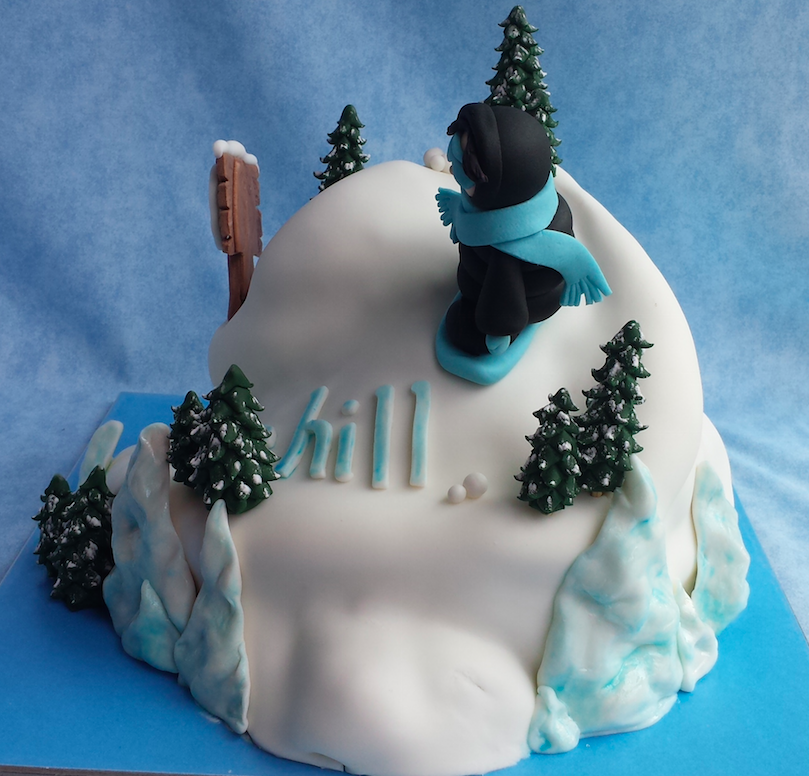