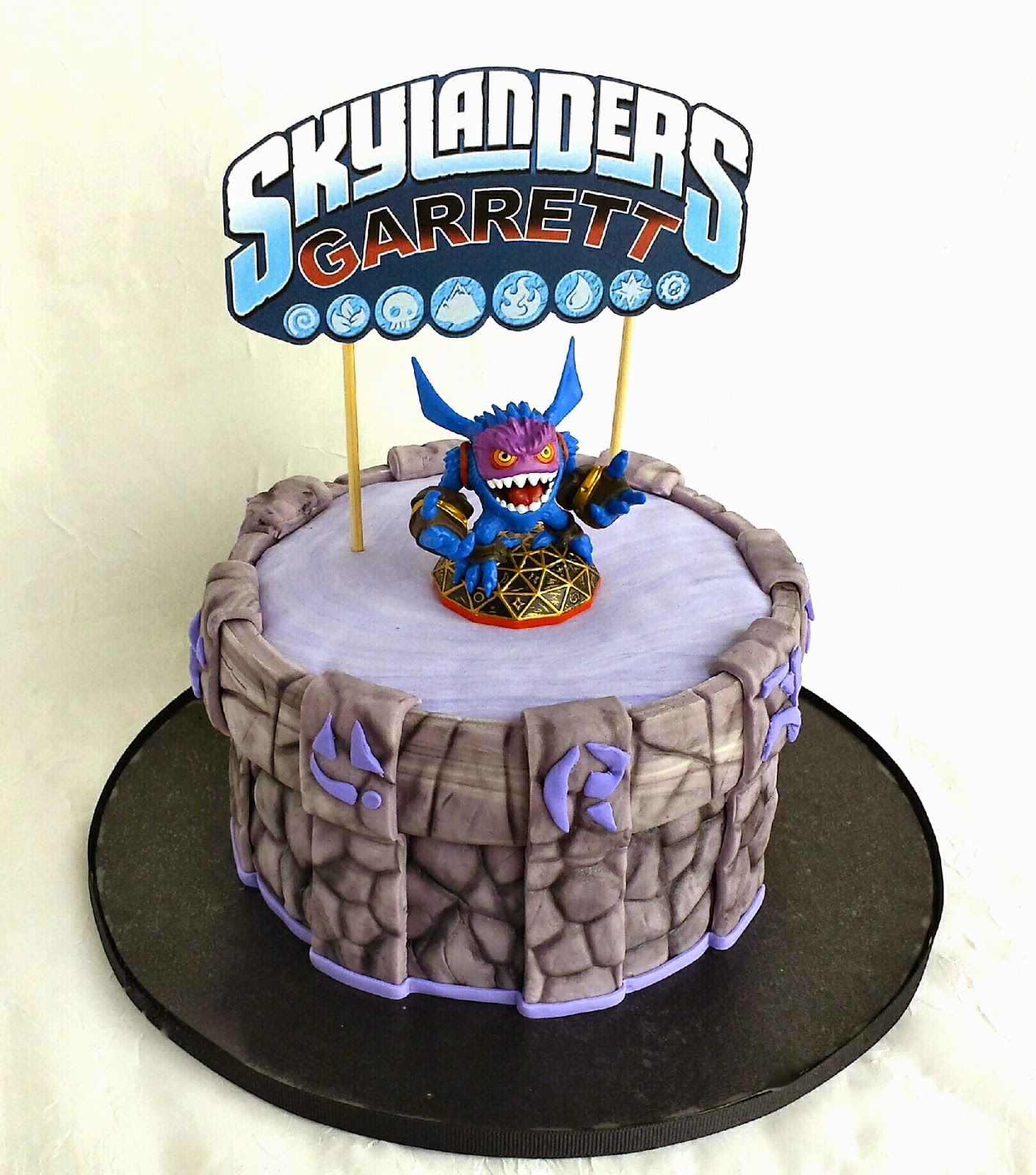 I made this little cake for my nephew, Garrett, who loves Skylanders.  Prior to making this cake, I knew absolutely nothing about Skylanders, but after doing some extensive research (I don't think people realize how much time "cakers" spend researching a topic prior to making a cake).  I decided that I wanted to make a cake based on the Skylanders Portal of Power.  The most difficult part was choosing which character to use as a topper, which determines the color of the portal.  After talking with an expert at Wal-Mart (a sweet, young boy who appeared to know everything about Skylanders and was more than willing to share his wealth of knowledge with me), I was convinced that Fizzy Frenzy Pop Fizz was the perfect character to use.  Oddly enough, he kind of reminds me of My Pet Monster.  Remember that show?  I digress...  For this cake, I used three six-inch layers of chocolate cake with peanut butter filling (a family favorite).

While the cake was baking, I worked on the banner.  I found a picture of a logo online that had a name underneath the logo.  I was able to use PowerPoint to cover up the other name and then use Word Art to replace it with Garrett's name.  I also resized the image to be six inches wide.  To save everyone else the trouble, here is the logo with the name removed so that you can add a name of your choosing: 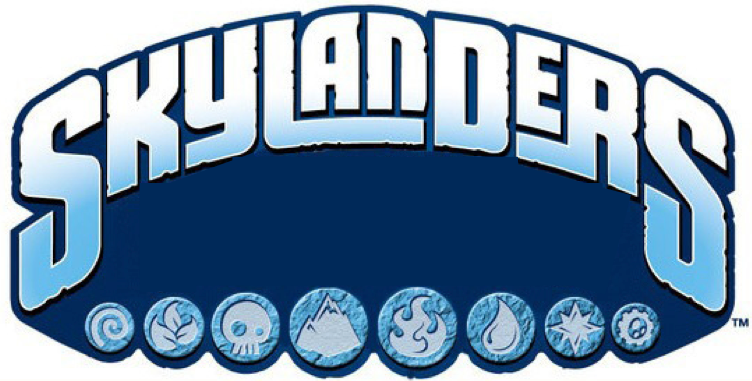 Since the character I chose was from Trap Team, the "Trap Team" subtitle was written in red/black, which is why I wrote Garrett's name in red/black.  I used the Arial Black font with all capital letters.  I printed it out on cardstock and taped two skewers to the back.

When the cake had cooled, I leveled it, filled each layer with peanut butter frosting, and then covered it with a thin layer of peanut butter frosting.  Then I marbled some gray fondant with a little bit of white and covered the whole cake.  I didn't roll the fondant quite as thin as I normally do, because I didn't want it to tear when I made the rocks. 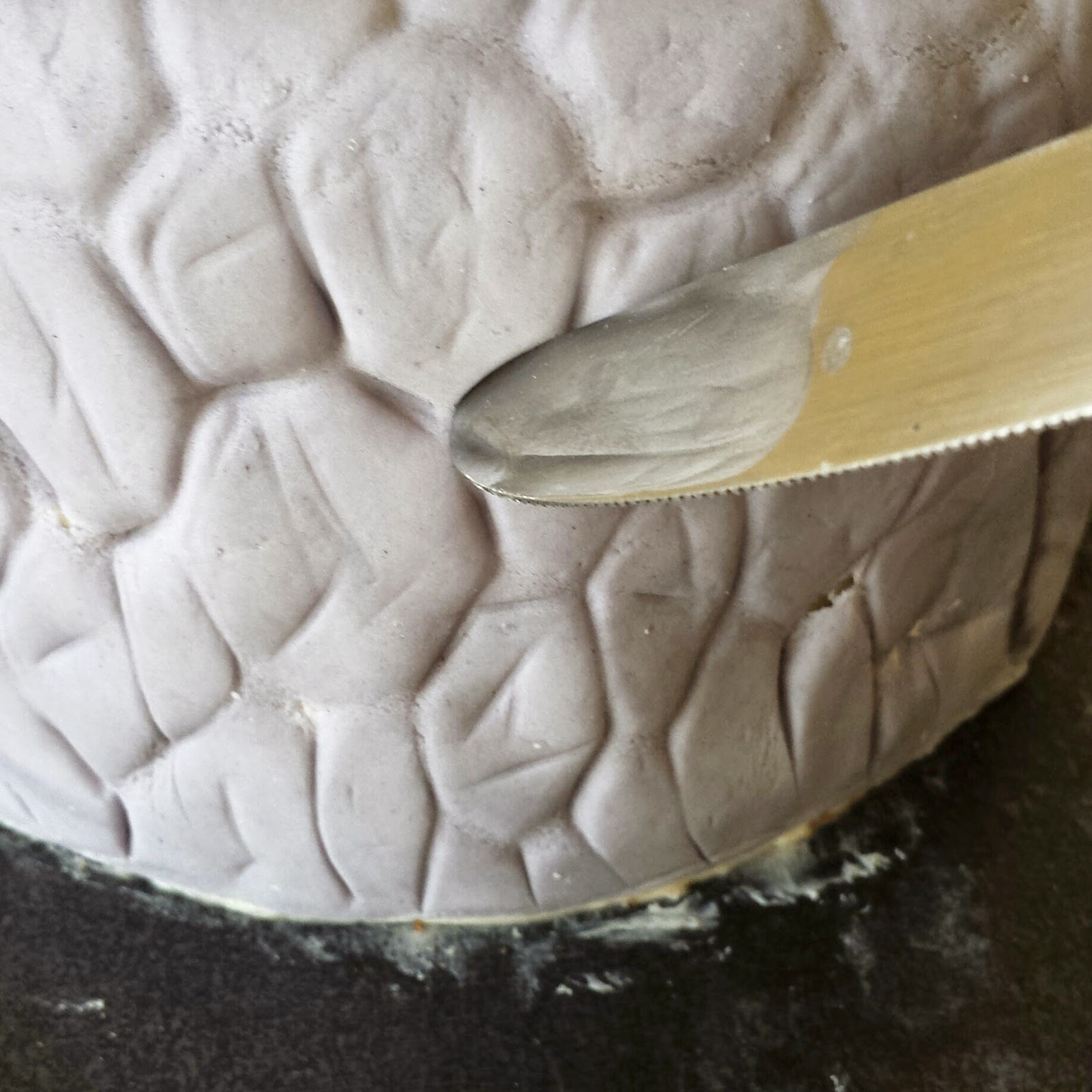 After I had finished outlining and adding definition to the rocks, I accented the lines that I had made with black luster dust.  I used a small, angled brush to add luster dust between all of the rocks.  The brush also helped me to round the edges of the rocks a little bit, and to expand the gaps between rocks.  Then I brushed luster dust onto random places on the rocks to give them some dimension. 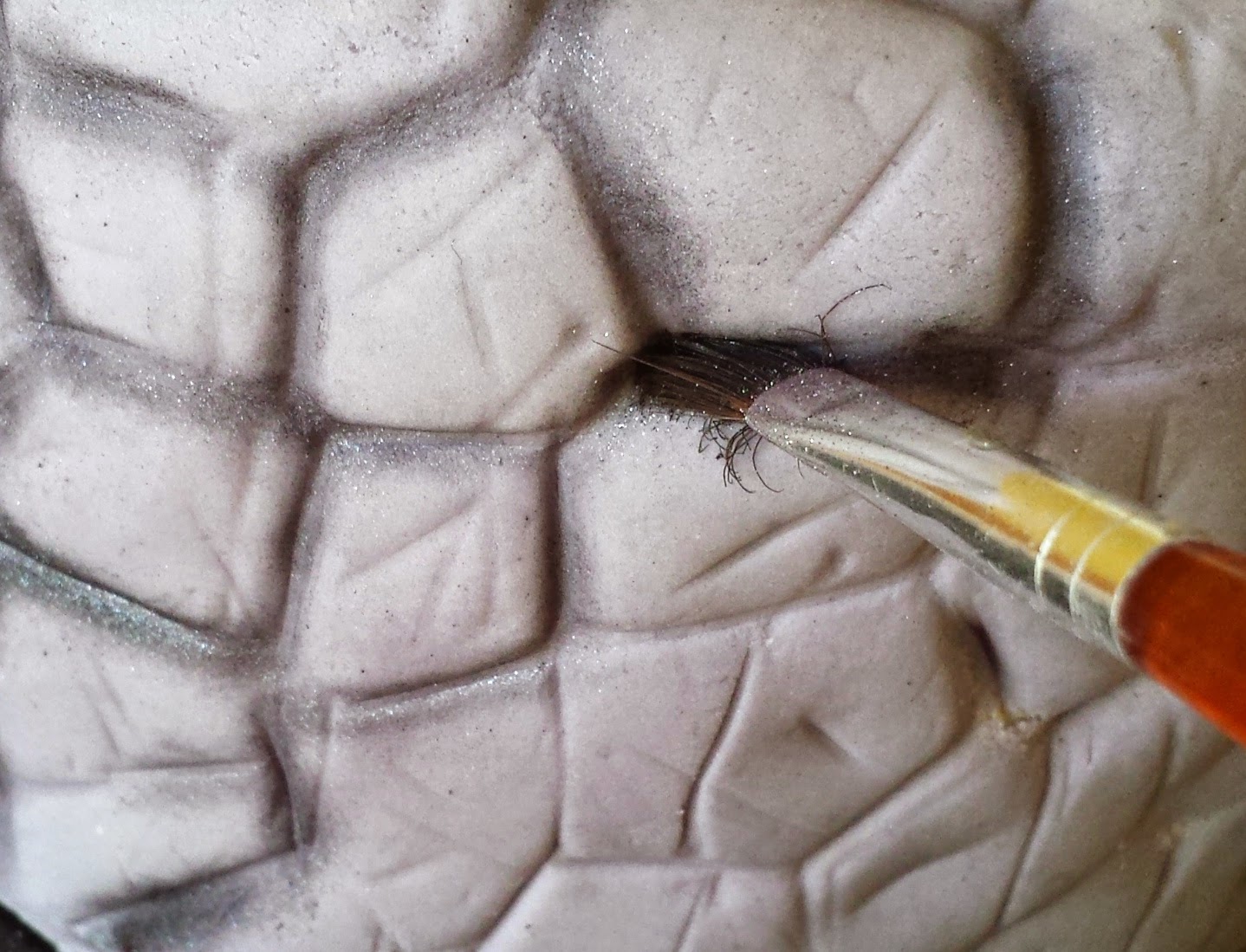 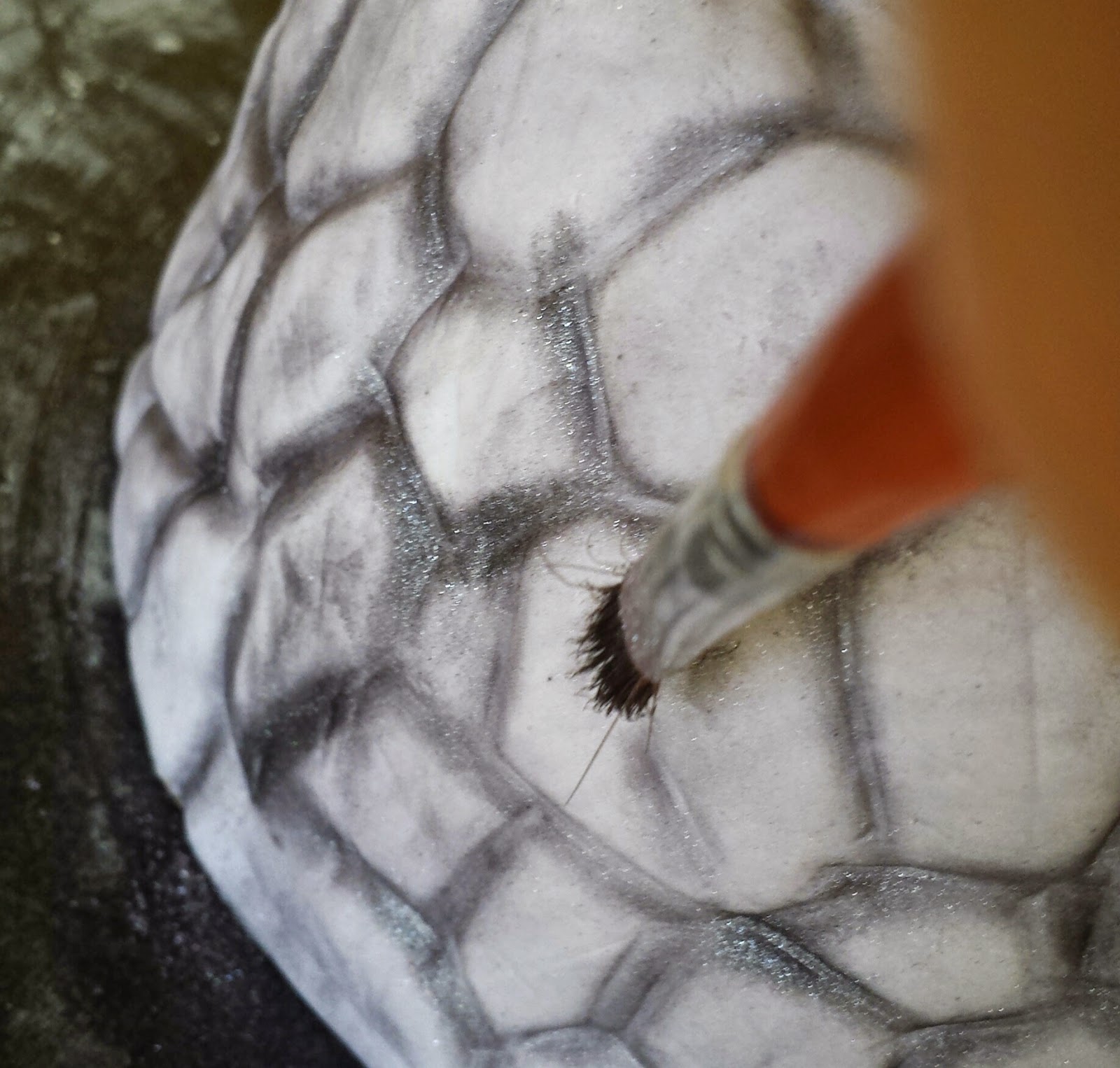 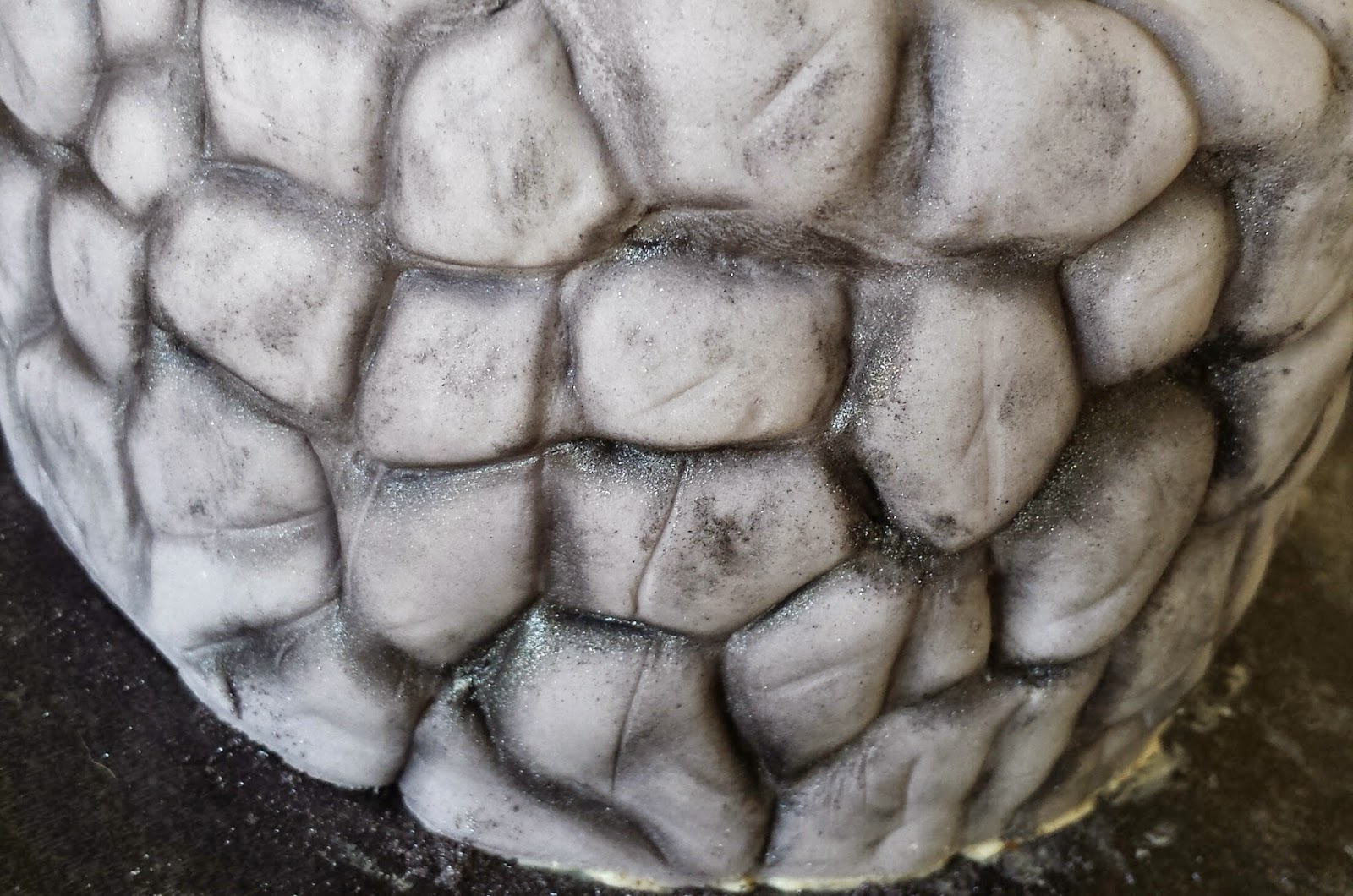 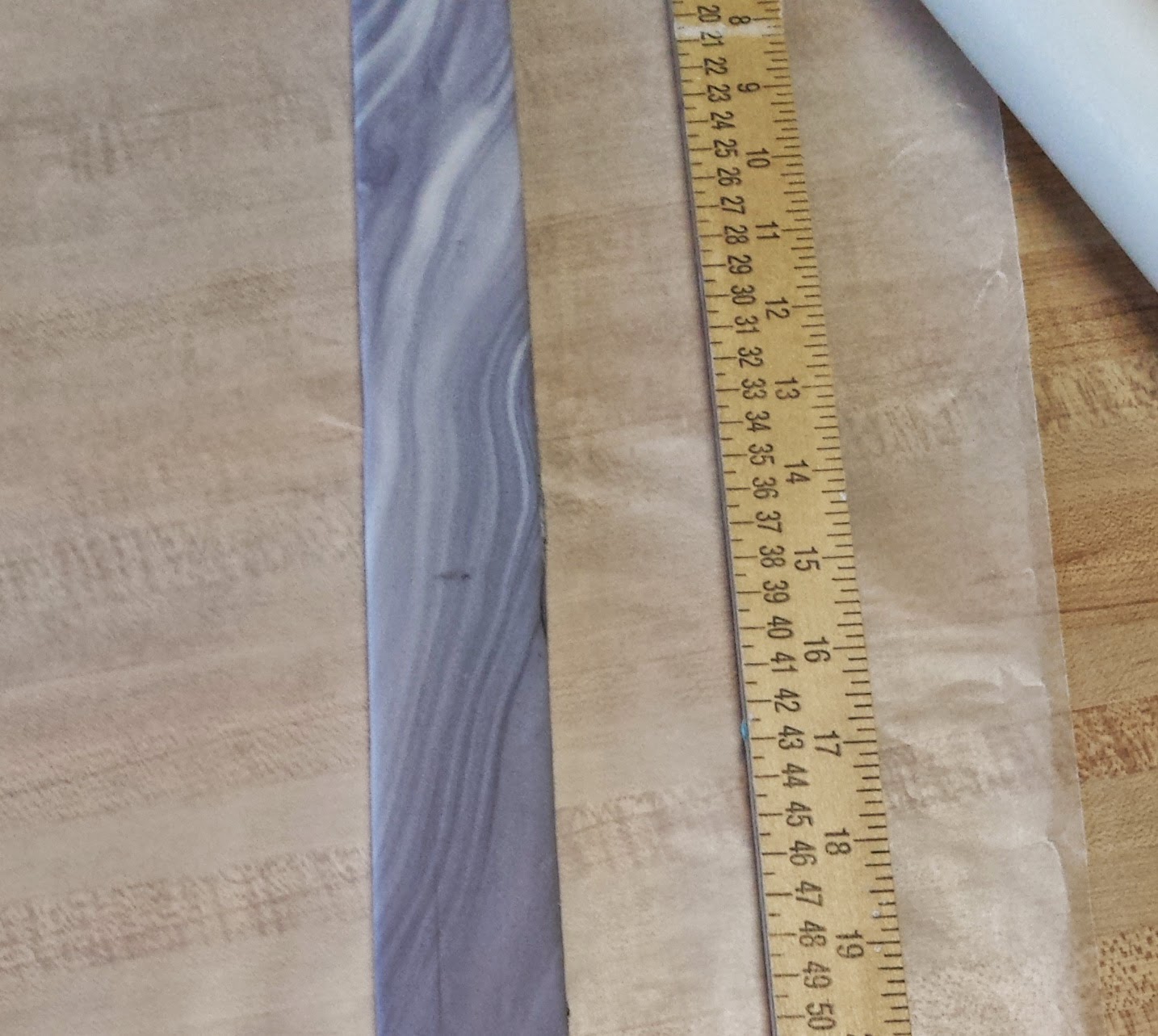 In the pictures of the portals that I saw online, this top edge appeared to be made up of rocks that were more linear and less circular (if that makes any sense), so I didn't bother to use my rock impression mat for the edge.  Instead, I just used the back of a butter knife to make lines and cracks, and then I brushed some black luster dust in the lines/cracks.  I don't know why I didn't end up taking any pictures during this process, but this is a close-up of the top edge in the end:

After I finished the top edge, I added the purple circle in the middle.  I actually marbled some purple and white fondant to try to give it a swirling vortex effect, but I over-mixed the fondant, so it didn't end up very swirly.  I rolled out the marbled fondant and placed my six-inch pan on top of it as a guide to cut the circle.  Then I placed the circle of fondant on top of the cake and pressed it outward with my fingers until it met the edge of the stone.  Again, I didn't take pictures during this step, but this is what it looked like later on... Not very marbled. :-( 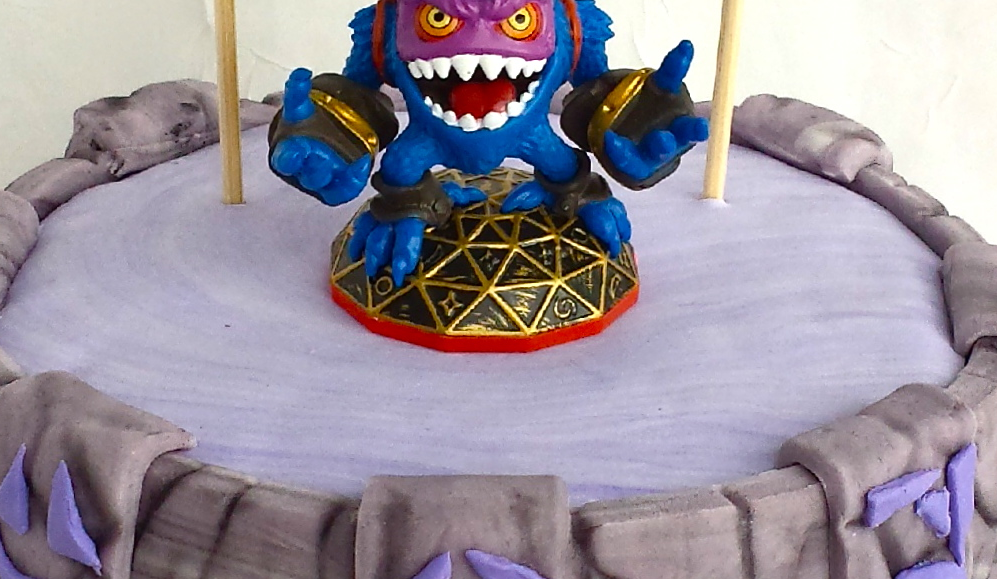 After I attached the circle, I added eight vertical strips around the cake.  Again, I marbled some gray and white fondant, rolled it out, and then cut eight strips that were one inch wide.  I use my impression mat to add a rocky texture, and then I attached each strip with some piping gel, curving the top of each strip up over the top edge.  Then I used a butter knife and some black luster dust to accentuate the rocky texture.

Next, I made the symbols that went around the top edge of the cake.  Believe it or not, I had a really difficult time finding the exact symbols.  I ended up using three different pictures and I was able to make out four different symbols, so I repeated each symbol.  I wasn't too picky about this part because I didn't think that anyone would look at it very closely.  As a matter of fact, I probably could have just invented my own symbols and no one would have noticed. :-)

I used my clay extruder to add a border around the bottom edge.  After looking at countless pictures online, I still couldn't figure out whether the border is supposed to match the color of the the portal, or if it is always supposed to be neon green.  I decided to go with purple, since it matched better.  I attached it with piping gel, and I used my butter knife to press the border into the crevices.

Lastly, I added Fizzy and the banner. 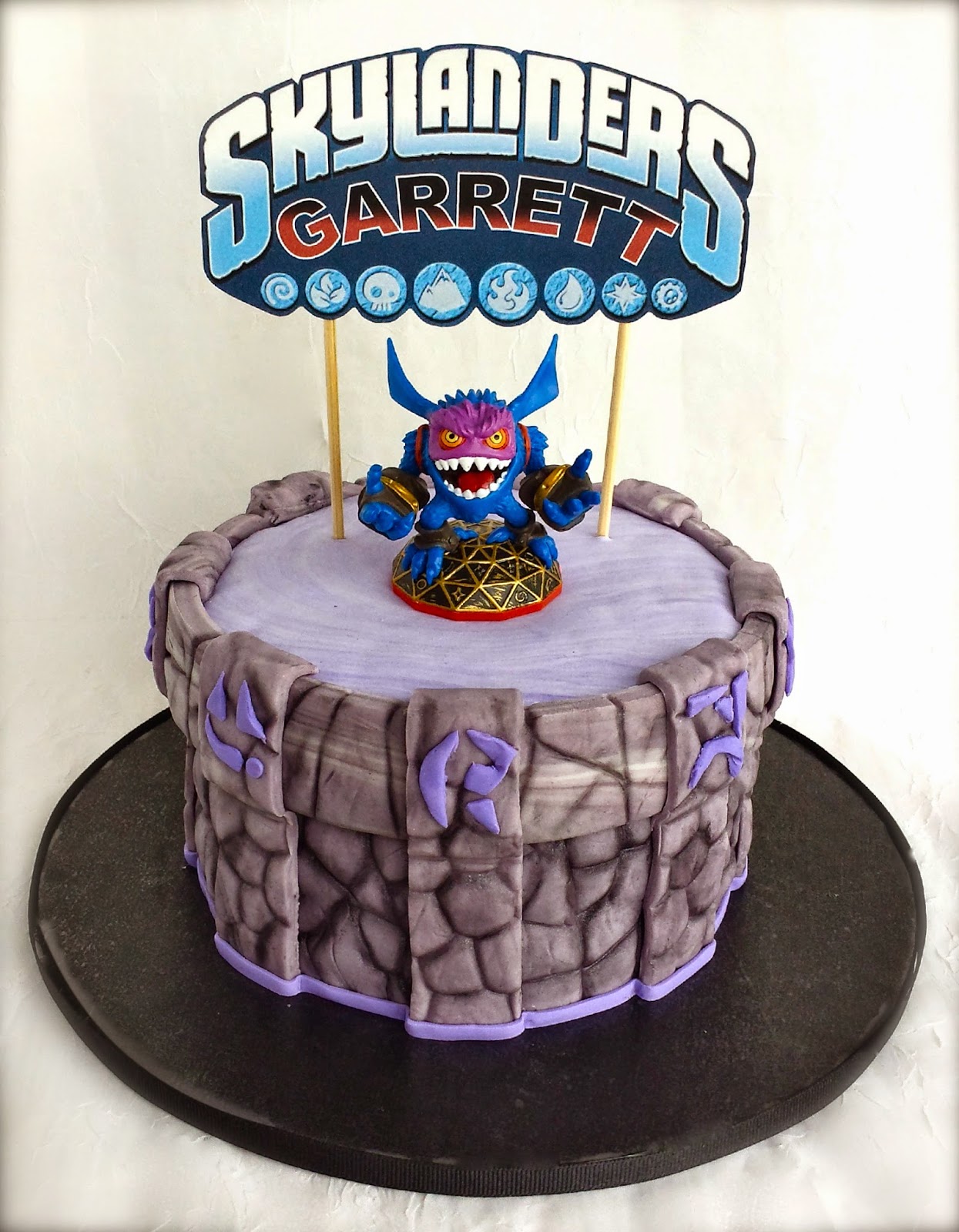 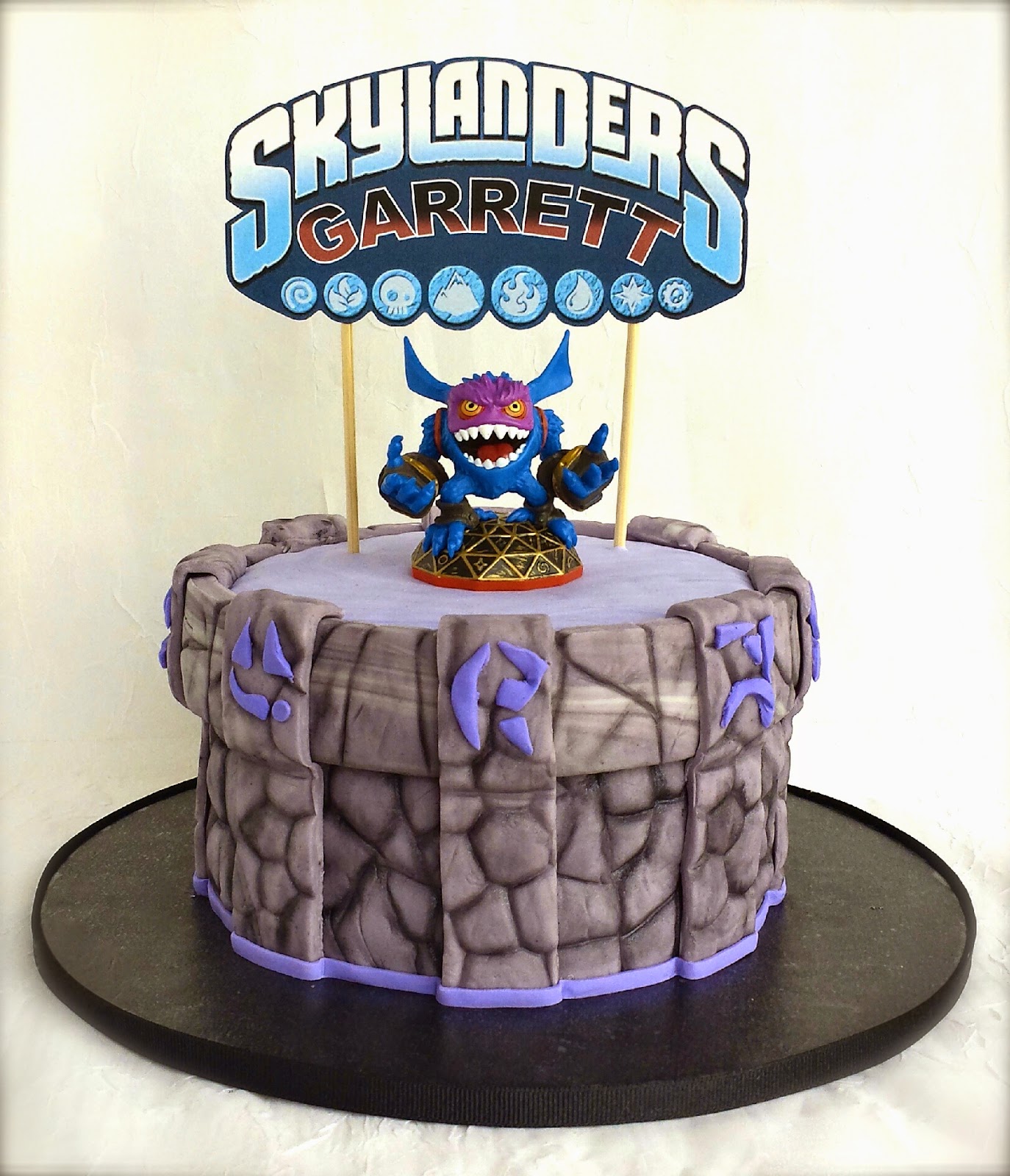 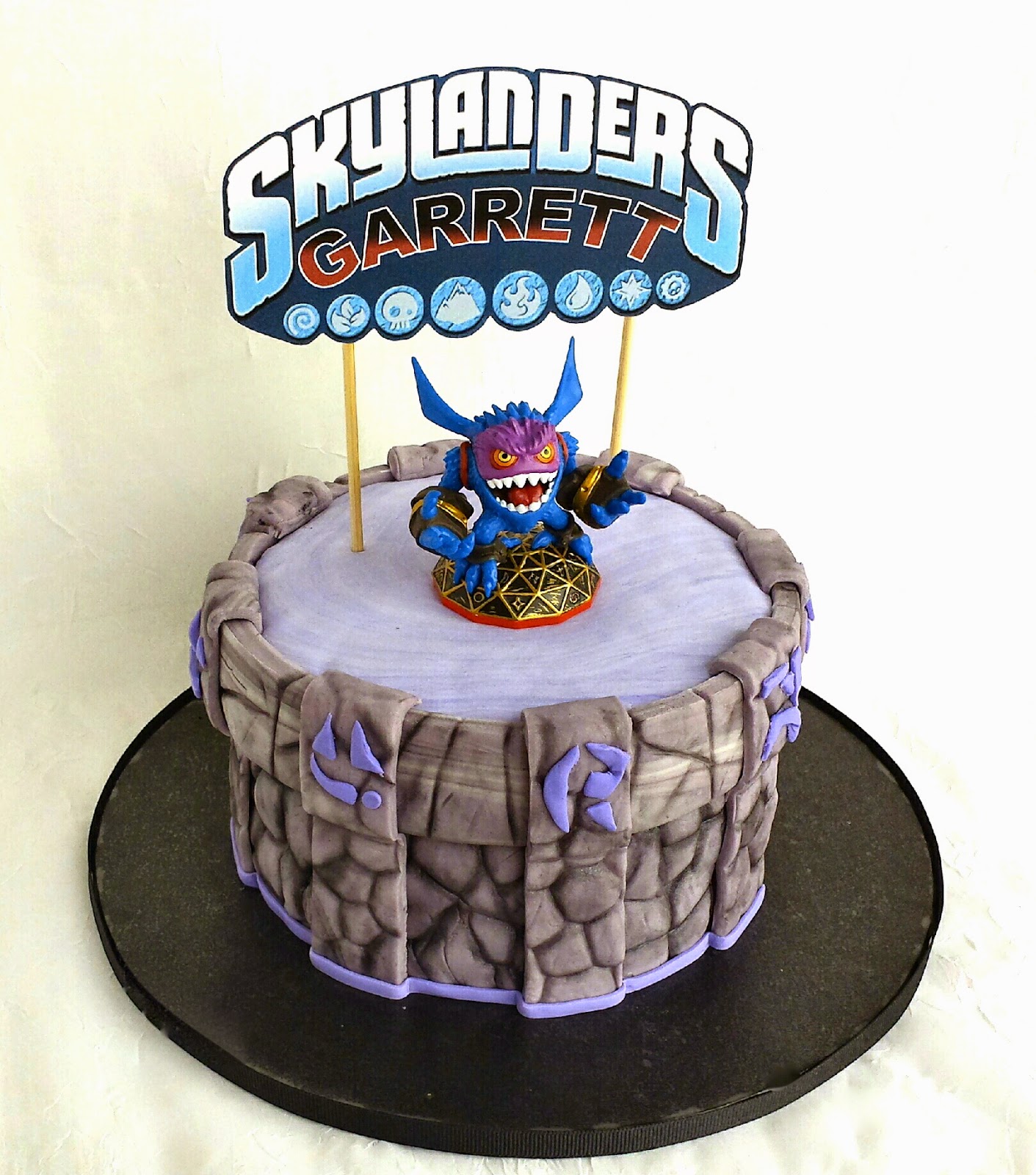