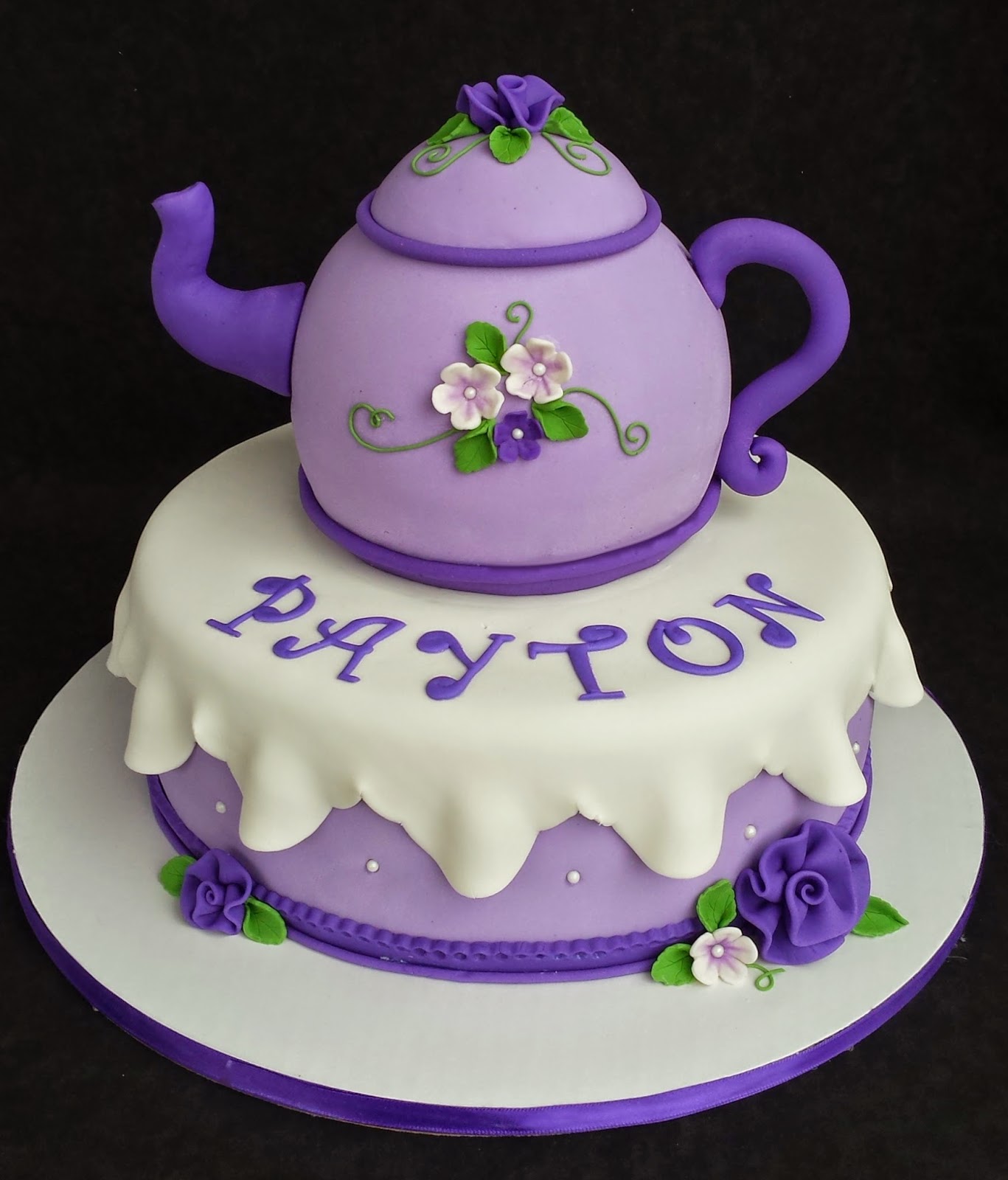 I made this teapot cake for a former student of mine, for her foster niece's third birthday.  She showed me a picture of a cake that she liked and asked me to make a similar cake with a bigger bottom tier, different flowers, and purple instead of pink (this particular color scheme was inspired by Sophia the First).

I started by baking the ball-shaped cake.  While the cake was in the oven, I prepared the cake board by gluing three cardboard cake circles together and adding purple ribbon around the edge.  Then I took a handful of the purple fondant and mixed it with tylose powder (to help it harden) so that I could make the handle, spout, and roses.  To make the spout and the handle, I rolled the fondant in my hands and manipulated it until I achieved the design that I liked.  Fortunately, I had a styrofoam ball, that was the same diameter as my cake pan, that I was able to use to check the sizing of the spout and handle.  It also helped me form the edges of the spout and handle so that they would fit snugly onto the round cake.  Since the spout seemed heavy, I decided to add a skewer to give it more support when I attached it to the cake.

To make each ribbon rose, I rolled out a thin strip of fondant (about two inches wide and ten inches long), folded it in half lengthwise so that there was no "raw edge" and then rolled it up, pinching it in places to make pleats.  (For a detailed tutorial on how to make ribbon roses, visit http://www.make-fabulous-cakes.com/fondant-ribbon-roses.html.  Her explanation is perfect!) 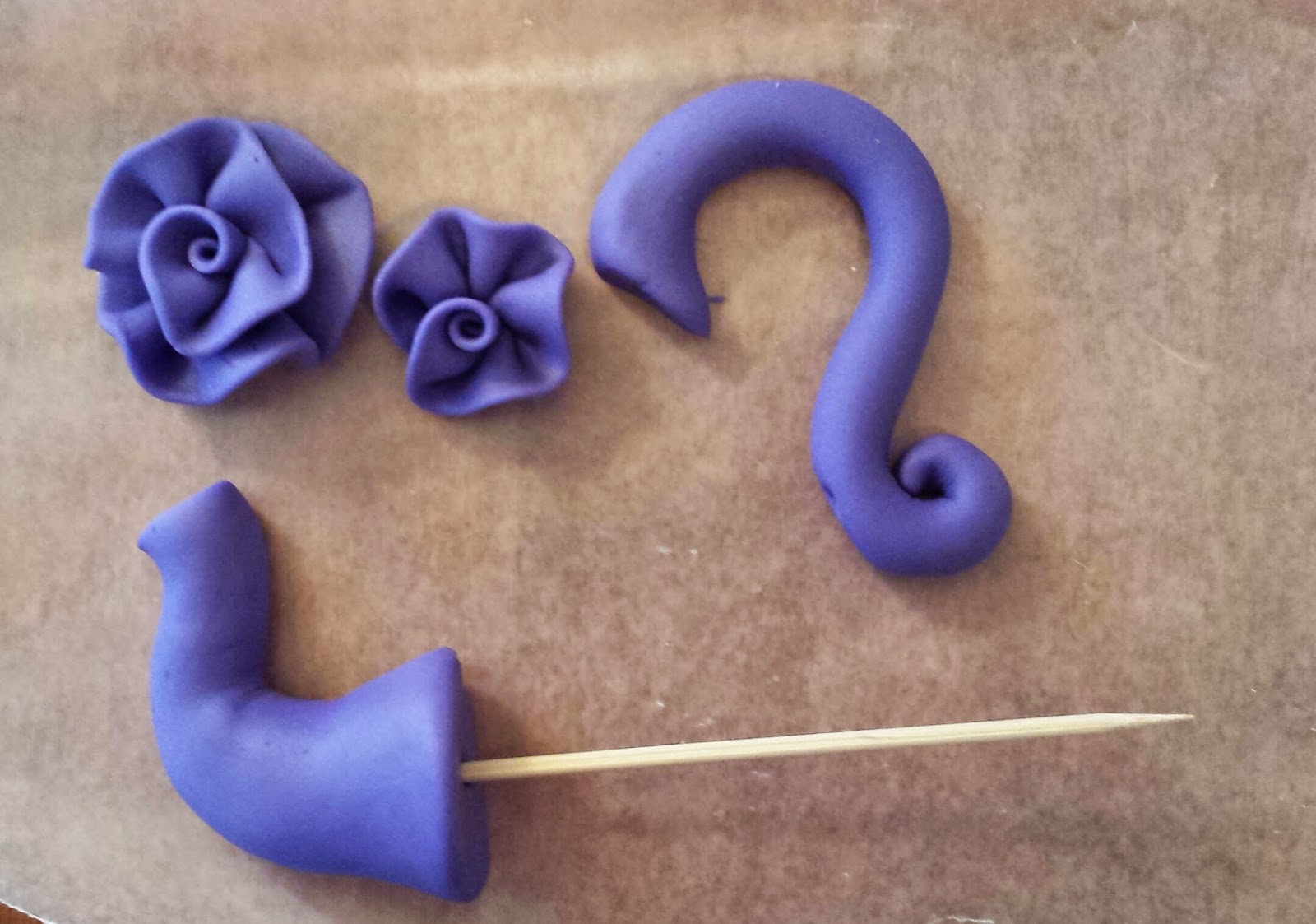 The other piece that I made while the cake was baking was the lid of the teapot.  I could have easily applied this directly to the cake, but I had time to waste while the cake was baking, so I decided to make it in advance.  For this, I just rolled a ball of fondant in my hands and then pressed it down onto the styrofoam ball, smoothing the edges down until it had the shape that I was looking for. 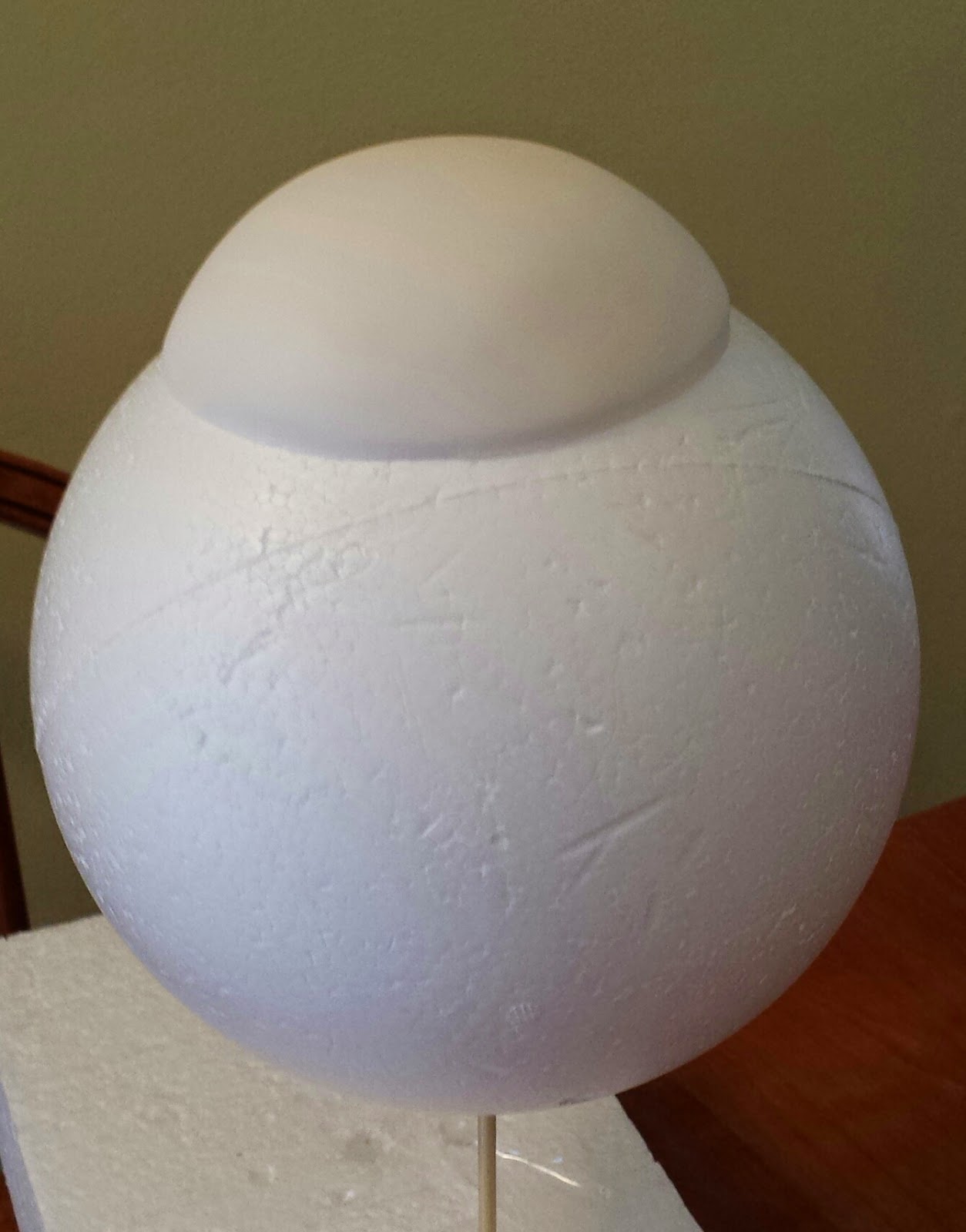 When the two ball-halves were cool enough, I cut off the bottom edge of one of the semispheres (so that there was about a three-inch flat spot on the bottom of the sphere), stuck it to a round piece of cardboard, piped a dam of frosting on top, and then filled it with vanilla frosting.  Then I placed the other half on top and placed the lid on top of that.  I covered the whole ball with a thin layer of frosting.

To make the lighter purple that I used as the primary color for the teapot and the table, I mixed some of the purple fondant with white fondant (1:1).  (I have used purple food coloring with white fondant to achieve this color before, but in my experience, fondant that I have tinted purple tends to fade to gray rather quickly.)  Once the fondant was the lavender color that I desired, I rolled it out and covered the teapot and lid.  Then I stuck a dowel down through the whole thing (lid, teapot, and cardboard).  This made it easier to transport later.  I also used my clay extruder to add a rim of dark purple fondant around the base of the lid.  Then I set the teapot aside and worked on the bottom (table) tier. 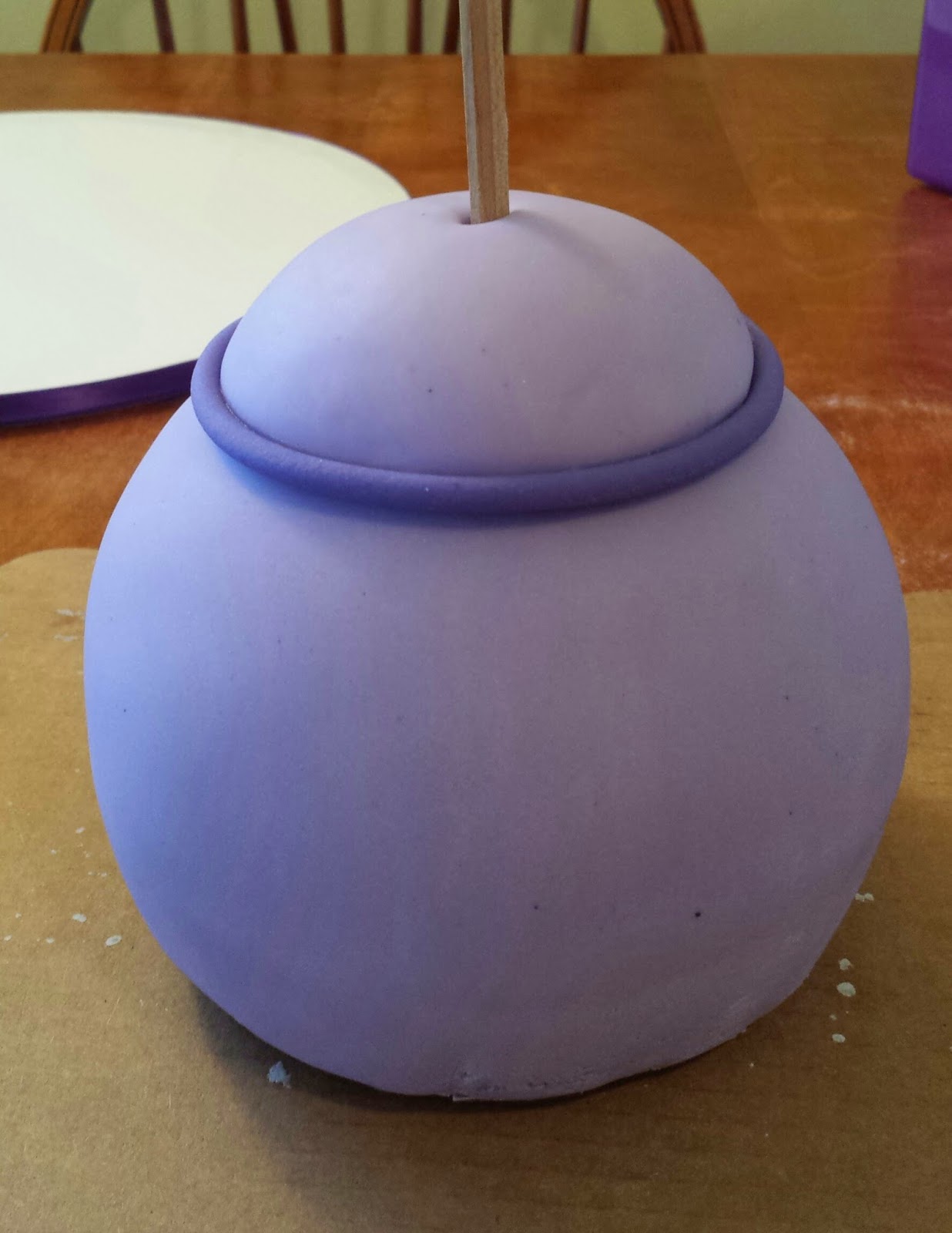 To make the table, I leveled, filled, and stacked three 10-inch round layers (about four inches tall).  Then I covered the cake with a thin layer of vanilla frosting.  I rolled out the remainder of the lavender-colored fondant and applied it to the cake.  To make the tablecloth, I rolled some white fondant onto a 14-inch cardboard cake circle, trimmed away the excess, and went around the edge with a cookie cutter (I had actually cut the cookie cutter in half to get the shape that I wanted).  If I had thought of it at the time, I might have used a frosting tip to make little holes around the edge to make it look like a lace tablecloth.  An impression mat could have given it some character, too. 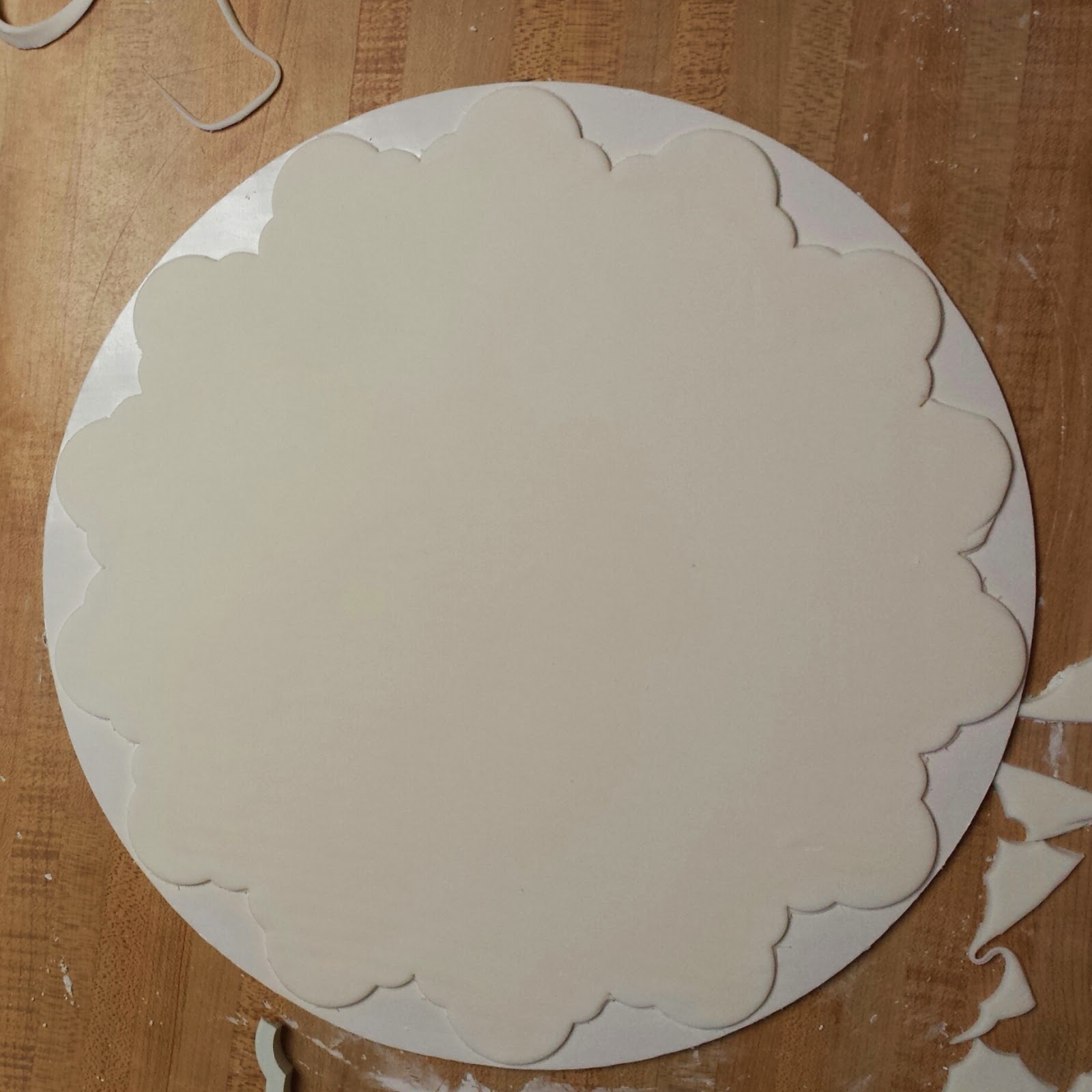 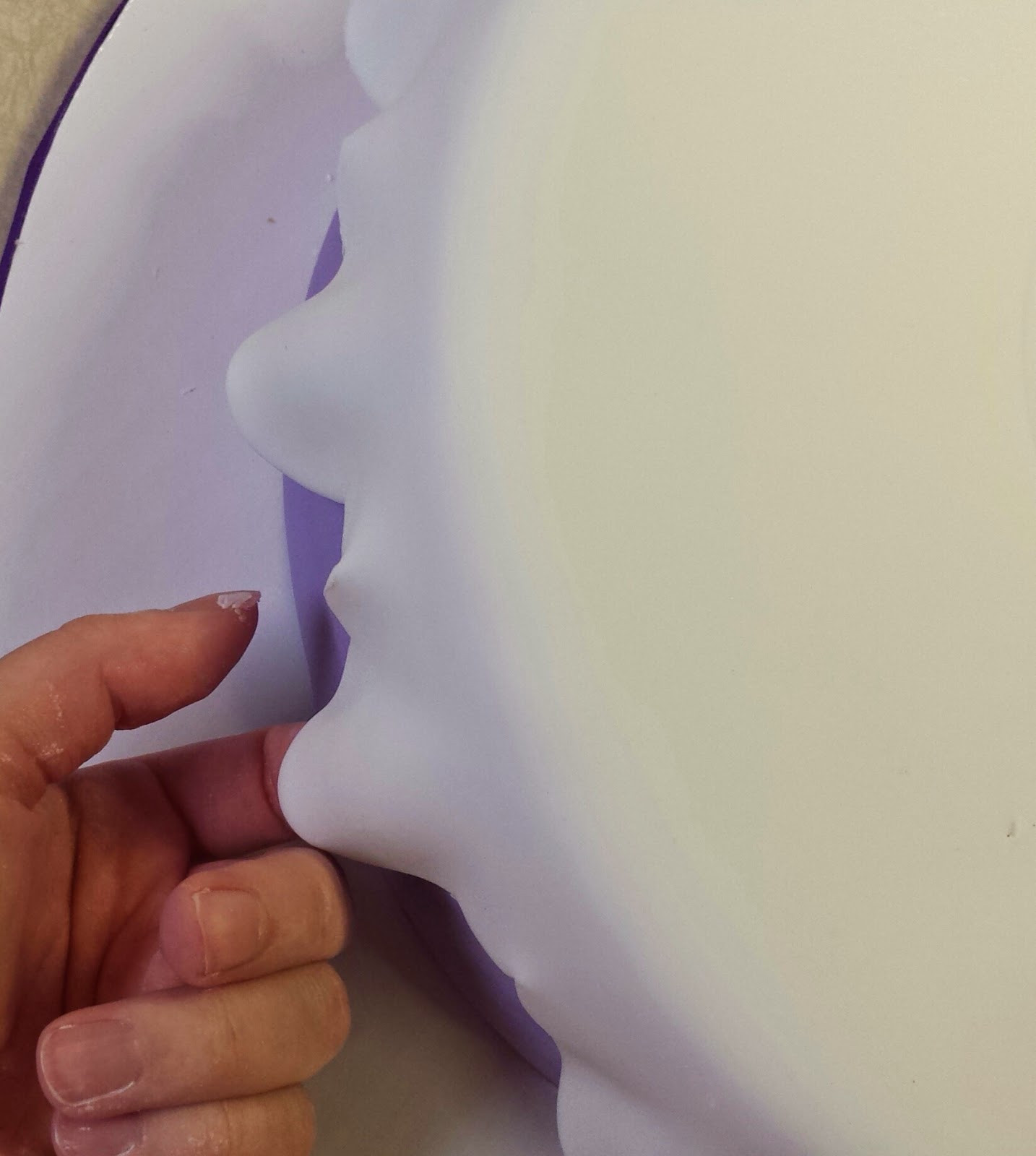 Once the tablecloth was in place, I set the teapot on top and pushed the wooden dowel all the way down through the whole cake.  Then I cut off the top of the dowel and stuck one of my ribbon roses on top of the lid, over the dowel.  I used piping gel to attach the handle and spout, which were firm but pliable at that point.  I added a flat strip of dark purple fondant around the base of the teapot, and then I put a cylindrical strip (matching the strip around the lid) just above the flat strip to make it look like it was sitting on a base or saucer. 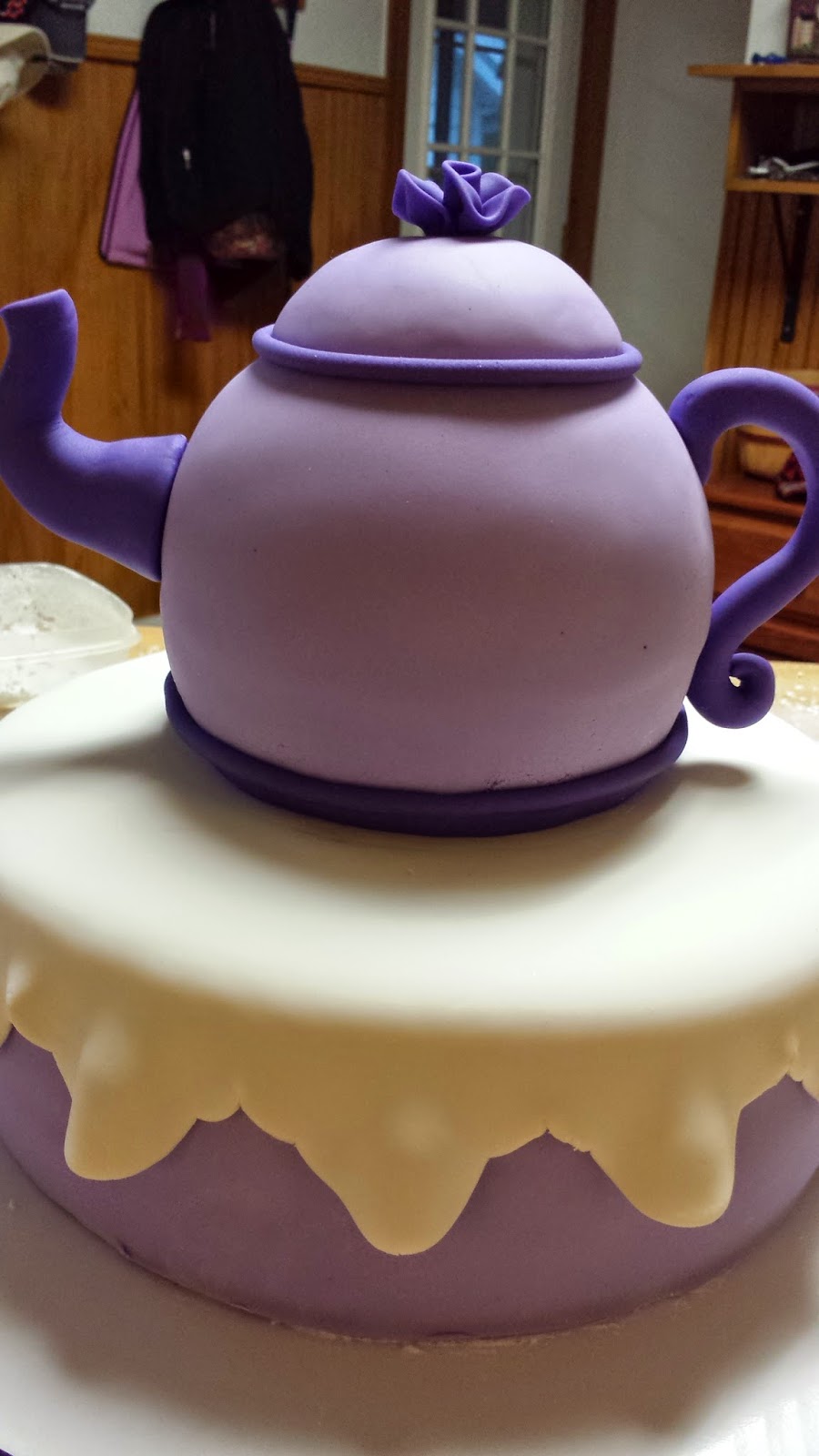 Next, I used a silicone mold to make the border around the base of the cake.  I added a cylindrical strip in front of it with my clay extruder.

I used some basic flower cutters to add some small flowers to the cake, dusting them with purple petal dust in the center.  I used a leaf cutter to make the leaves, and I folded/pinched them at the base to make them smaller and to give them more dimension.  I also added a few pearls to the centers of the flowers and around the edge of the cake... Who doesn't love pearls? 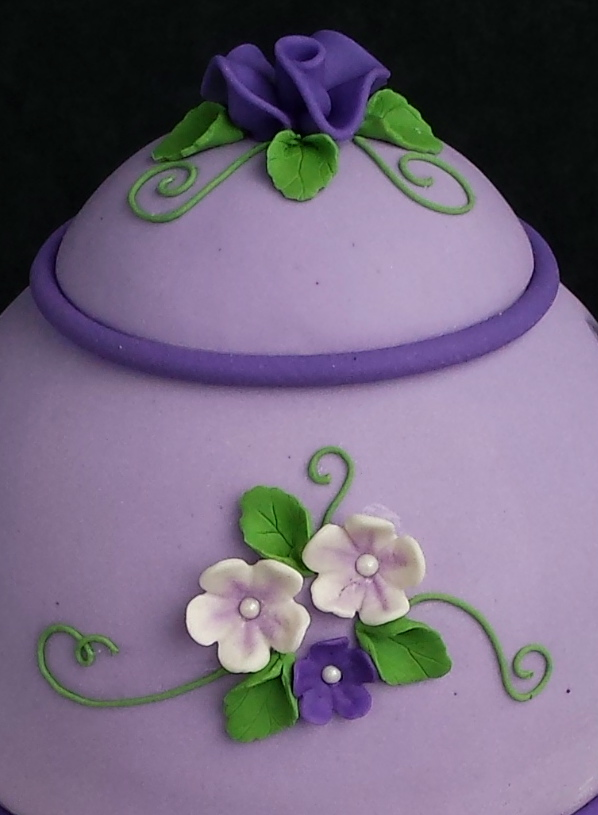 Last, but not least, I added the name.  For this, I used the Tappits Funky Alphabet letter cutters. (I absolutely love this font; it's perfect for a girly cake!) Initially, I hated how the Tappits worked.  My fondant kept getting stuck no matter how thin/thick I rolled it.  Then I did a little bit of research and discovered the secret: Roll your fondant very thin, then cover your fondant with a layer of plastic wrap.  When you press down onto the plastic wrap with your cutter, it will push through the fondant, but won't cut the plastic.  It leaves a nice, soft, clean edge on the letters and they don't stick to the cutters.  Then you just peel away the excess, allow the letters to harden for a few minutes, and then arrange them on your cake. When you're happy with the position of the letters, secure them with a dab of piping gel or water.  (I wish I had read that advice before using my Tappits for the first time.) 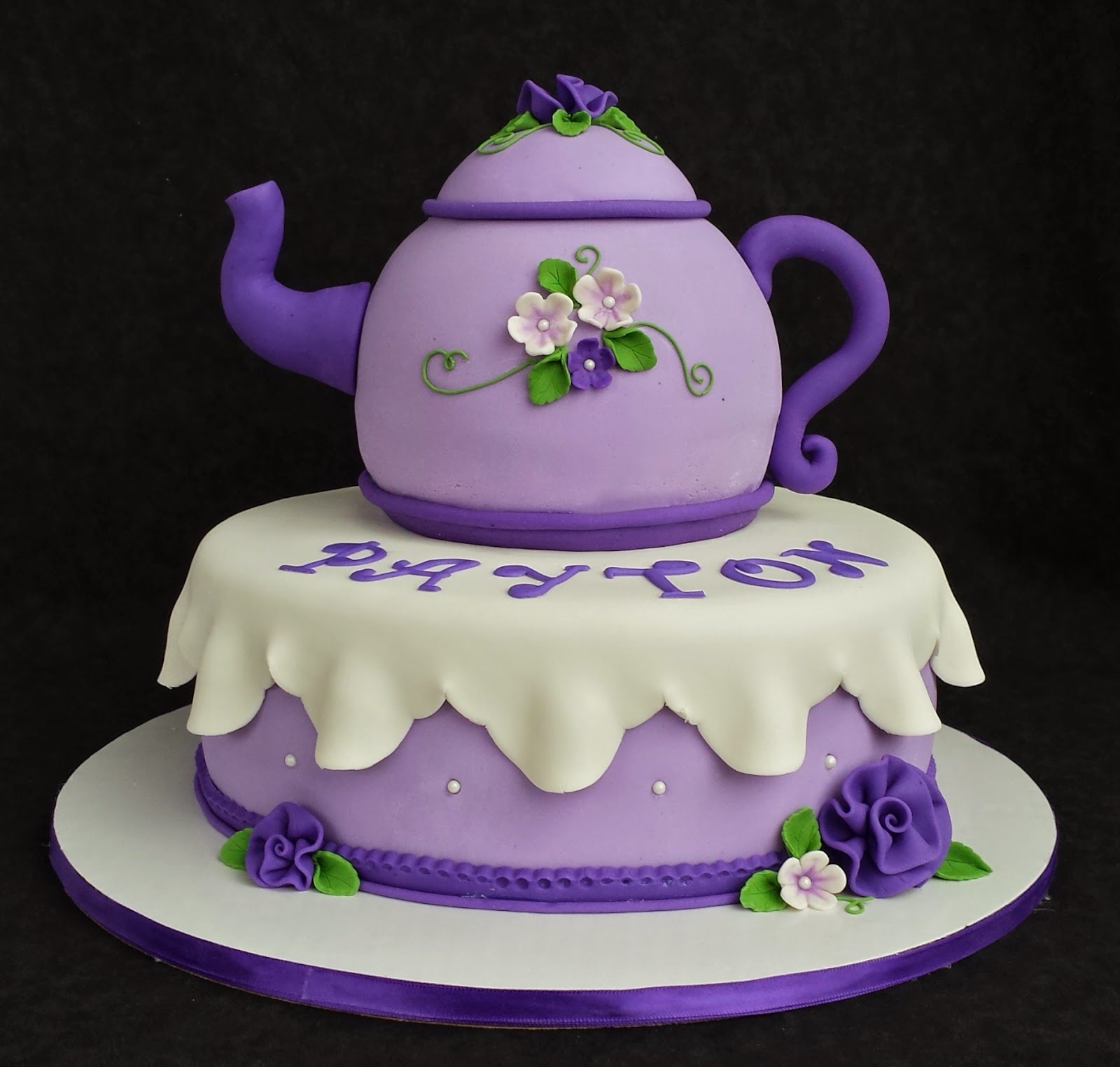 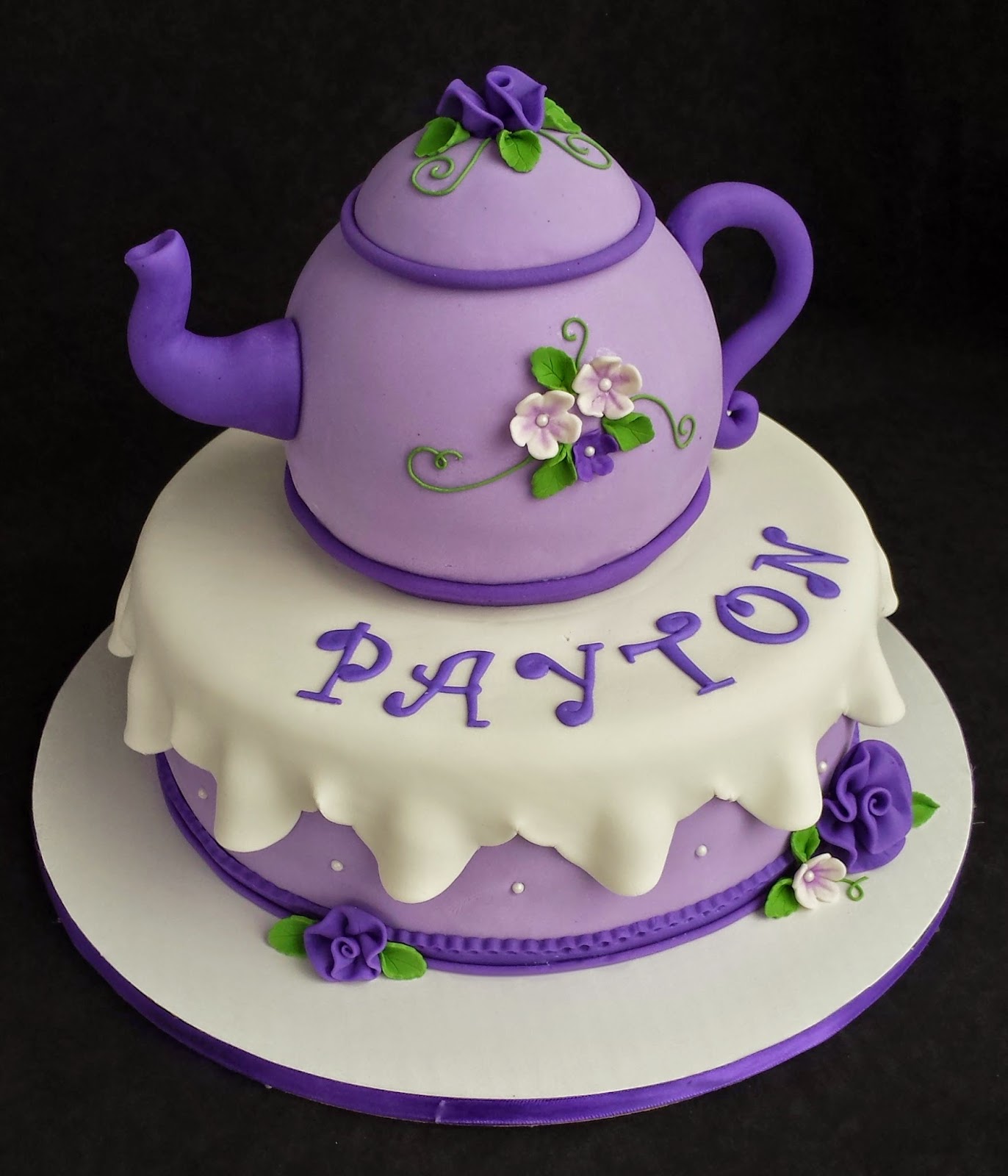